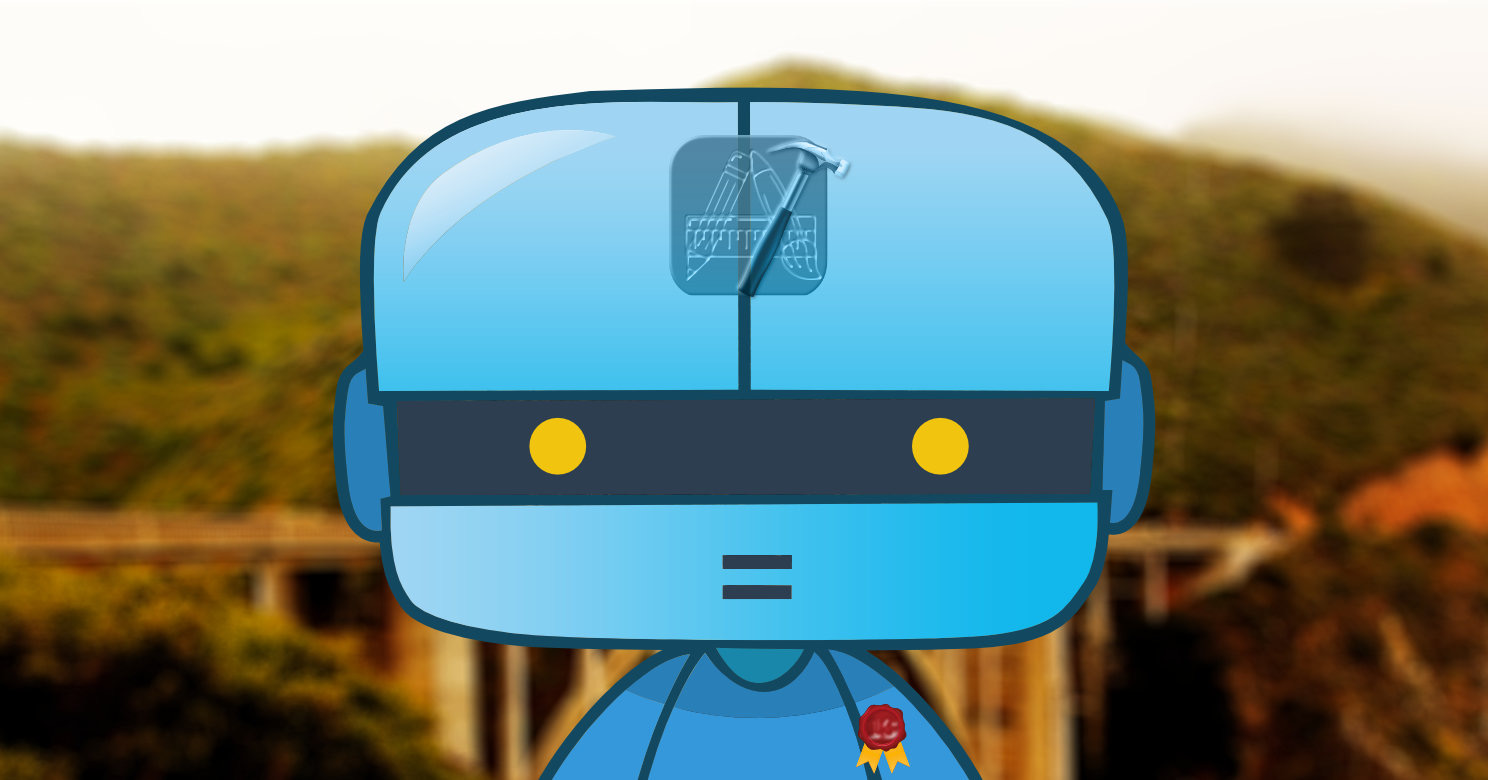 Continuous testing is paramount to ship serous software. Yet continuously running tests is a pensive productivity plight. Is it possible to automate testing? Yes you can.

Testing is an important phase of any software development. Automated testing keeps code in check for all of those edge cases that can’t always be replicated reliably. Unfortunately as macOS developers, we probably don’t test our code enough. One common code is being too lazy to run those tests manually.

But when you reach a certain stage of development, continuous testing becomes critical. However running these tests becomes a chore—unless automated and keeps running in the background without human intervention.

Given these points, this article shows you how to setup Xcode Server for use to support macOS application development and automated tests.

In general these are the steps required to setup a Mac for use to run automated unit and user interface tests for macOS applications.

You perform steps 1–4 on the server whereas steps 5–7 would be best done on the client.

Before you begin, you would need to have these on hand.

Why a desktop Mac? In short it’s because of macOS’ lackluster support for multiple users—more information at the end of this post. Although a MacBook locked to a desk with a wired Ethernet would be a reasonable compromise—as long as the laptop doesn’t get lugged around (or closed in clamshell mode while operating).

To emphasize, if you’re looking to buy a Mac Pro or high-end Mac Mini for dual purpose of Xcode Server and daily development use, stop. You won’t be able to use this machine for anything else besides Xcode Server and maybe file server or other non-interactive uses. Save your (organization’s) money and buy a low-end Mac Mini instead—as long as it can run Monterey. Better yet, buy more than one lowest-end Mac Mini for the budget that you have if your utilization requires it. More details on this near the end of this post.

Xcode Server needs its own macOS user account for the purpose of running its integration jobs. Without a doubt this technical user account should be a non-administrative one, otherwise you will risk the server being taken over by a rogue project.

Please follow these steps to create an account for Xcode Server. To explain, you should do this on the mac to be designated as the server.

Fast User Switching allows you to login to other accounts located in the same Mac without logging out—leaving programs running in the background while someone else uses the computer. Evidently this is an essential feature for running Xcode Server. Chiefly because Xcode Server needs its own user account and you would need to login as that account on every startup.

Xcode bot has a feature that lets you monitor UI tests that are currently running. Basically this feature is a button in Xcode to login using Screen Sharing as the Xcode Server user in order to monitor the tests live.

Enabling Remote Login is optional, but would be useful when you require quick command-line access to the server. Essentially you can use the Terminal to ssh into the server and access a private command-line session there.

Follow these steps to enable Screen Sharing and Remote Login in the Server mac.

Having done the necessary preparation, now it’s time to setup Xcode Server. Equally important, we will test the setup afterwards—which would be outlined in subsequent sections.

Undeniably, the first step is to download Xcode on the server machine. At any rate, the easiest way for this is to download it from the Mac App Store. A point often overlooked, you would need to install Xcode in main drive of the server under the /Applications folder. To clarify, installing Xcode in other locations may prevent its server features from operating properly; despite no apparent detrimental effect when running Xcode interactively.

Having Xcode installed, perform these steps to set it up.

At this point, Xcode Server should be running. The rest of the setup steps can be done on the client Mac—the one that you use normally for day-to-day development work.

You will need with an example bare bones project to test the Xcode Server setup. To do this, you would need to create a blank macOS application from one of Xcode’s project templates. When you create this project, make sure you include both unit tests and UI tests options from the template. Particularly these tests are needed to validate the Xcode Server setup that you will do.

Having a test project on hand, you should then test it by building and running it locally on your development Mac. Afterwards run all the unit tests and UI tests—also locally. Chiefly this exercise ensures that the project can compile, run, and that you have a working development certificate.

Afterwards you would need to place this project in a shared git repository. You can put it on Github, Gitlab, a local NAS, or even a shared location inside the Mac server itself. As long as the project can be accessed by both yourself and the Xcode bot. Nevertheless setting up a git repository is beyond the scope of this post.

Xcode Server is mostly controlled by the client—another running instance of Xcode that connects to the faceless server. Correspondingly these clients need to be hooked up with the server to control the latter. What’s more, a given installation of Xcode can control more than one Server and vice-versa.

Follow these steps to configure an instance of Xcode server to a client.

Now it is time to setup your first Xcode bot. This would validate your server setup. Follow these steps to create the bot.

Now it is time to test the bot. We’ll run integration and make sure it creates a workable app. You should also complete these steps from your development Mac.

Congratulations! You now have your first Xcode bot working.

Why a Dedicated Desktop Mac?

In case you are wondering, why a desktop Mac is required? Why a dedicated one too? Can’t I use my MacBook Pro i9 with 64 GB of RAM for development and have Xcode Server running as a second user in the background?

Undeniably, you can but you won’t want to. There are a good number of shortcomings in both macOS and Xcode which would hinder your productivity if you use a MacBook for both daily work and server purposes.

The following are a few of those issues that I encountered personally.

I discovered those issues while running Xcode Server in an M1 Mac Mini. I suspect some issues could be specific to the M1 chip (notably the Keychain problem) since it has file protection schemes that are closer to iOS; but otherwise have not investigate this further.

When Xcode is running UI tests, macOS would darken the screen and show a watermark on the display saying,

This is called Automation Mode overlay and gets shown to the user logged-in on the physical screen and keyboard. Despite that Xcode UI tests is running on a different user in the background. The screen-photo below shows the automation that is running. To point out, this image has to be a photo since it couldn’t be captured from within the Mac itself. 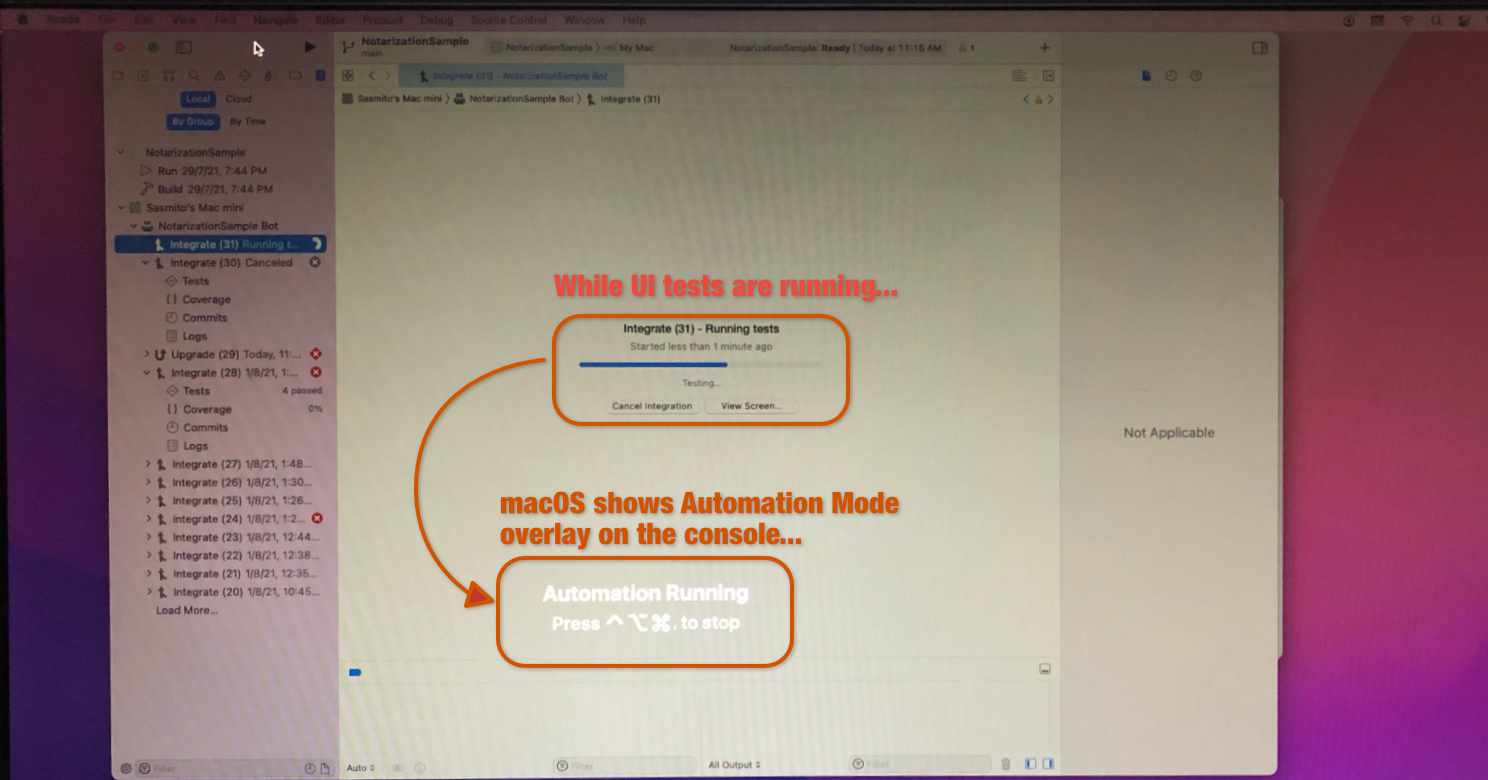 Obviously this automation mode overlay would be very distracting when you are busy with your work. Even though you can click through the UI elements underneath the overlay.

I’ve reported this to Apple as FB9432512 but sadly the company thinks that this is a feature and not a bug. Despite the fact that the overlay makes the Mac unusable to the interactive user.

Here is Apple’s response to my feedback:

Another issue that I found with Xcode Server and UI testing is how it handles screen lock. This problem occurs only when both of these conditions are met:

When the console is in that particular state, UI tests will not run. Meanwhile the Xcode bot will fail with an error message similar to the following:

I’ve reported this to Apple as FB9505050 (what a nice number there), but have not received any response as of this writing.

Custom build scripts would likely not have access to the login Keychain. This is likely caused by the keychain being locked when the user is running in a background session (through Fast User Switching). Unfortunately, Xcode bots would most likely run in background sessions.

Say, for example, you’re trying to run notarization as part of Xcode bot runs. If you employ notarytool and have it use a Keychain profile, it would fail with an error message similar to the following:

I’ve also reported this to Apple as FB9505064 but have not response to that feedback item.

There have been instances where Xcode Bot entries would have its “edit” button disabled—preventing you from modifying the bot. Usually these happens when:

Whenever this happens, the only solution is to disable Xcode server and then re-enabling it. Of course this requires the admin to log in to the server, which makes it inconvenient when need to be done frequently.

Which leads to my argument that you would need to configure a non-changing IP address to the server machine. Either configure macOS to have a static IP address or configure DHCP in your router to always hand out the same IP address each time. To this end, both of these methods would be easier to configure and more reliable if the network connection is wired in the first place. Since Apple devices are known to randomize its network hardware address on wireless connections for security purposes.

Don’t wait until Monterey is released. Buy yourself a refurbished low-end Mac Mini (or re-purpose a not-too-old MacBook) and setup Xcode Server there. Start running your tests continuously in the background so that you can confidently ship new code without breaking existing functionalities.