The economy is a pyramid scheme

The fundamentals of world economy haven’t changed much since its early days in ancient egypt to the modern days of computers and the Internet. It mirrors the Darwinian “food chain” where there is a hierarchy of larger number of poorer people servicing smaller number of richer people, layer after layer,

The economy is a pyramid structure of workers in which the more affluent workers are supported by the workers who makes less money and thus have less to spend. Those who have money normally buys the products and services of those who are not as fortunate whereas the former get their money by servicing those who are wealthier than them. The very bottom of the pyramid are the likes of sweatshop workers making 5¢ sandals in China or farmer-workers (those who doesn’t even own the land that they work) growing rice in rural Indonesia. The next layers are probably the various kinds of office workers pushing pens or massaging keyboards. Finally the top of the pyramid consists of those folks you regularly see in the world’s top 500-ish richest people in the world. 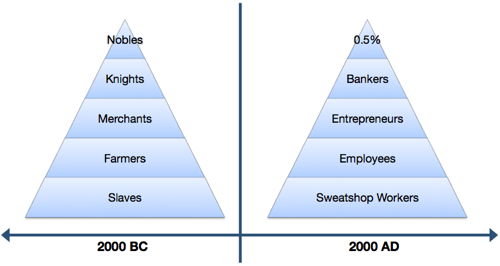 For example, I’m typing this article on a MacBook Pro — which is a not-cheap laptop by most standards (unless probably the standards of those above Obama’s $200K per annum “rich” line). This fine laptop is assembled by relatively elite factory workers in China (relatively elite since probably Apple doesn’t contract sweatshops to make their stuff) that are supposedly more well-off than most other factory workers in the region. But probably they won’t be able to buy the laptops that they make from retail just by using their own salary (should they don’t have any employee’s discount) and thus probably buy cheaper knock-offs or DIY computers that are assembled by actual sweatshops. Which in turn those sweatshop workers probably won’t be able to buy the stuff they make themselves.

Enough for looking downwards, let’s look at the other direction now. I currently work as an IT support in an investment bank. We make and sell bonds and other investment products to big businesses and high net-worth individuals (those worth more than one million dollars). Since those bonds are primarily sold in at least a million dollar denomination (US dollars, not Zimbabwe dollars), I couldn’t afford to buy even one such bond with my current salary. I can only buy cheaper investment products (with lower returns) that other companies sell. Hey, that’s pretty similar to the Apple factory worker discussed earlier.

Interestingly enough, the size of your salary isn’t really determined by how difficult (or challenging, depending on your point of view) your job is but more tied to how much money your company is making and how much does it want to share it with you. Additionally how much other companies pay for a similar job matters too. You can be a code monkey in a highly profitable Fortune 500 company in New York making $100K+ annually or you can be the same code monkey in a dot-com startup in Jakarta making $2000 per year. Similarly the CEO in the former company probably makes millions of dollars per year but a CEO in the latter makes millions of rupiahs (the exchange rate at this time of writing is about 12K Rupiahs per USD) — that’s a ten-thousand-times difference. If the pastures are green it’s not too difficult to grow your cattle.

0 thoughts on “The economy is a pyramid scheme”

My latest guest post for Waldo shows you how to use SQLite databases using Swift through Gus Muller’s FMDB library.   Head to Waldo for the article: Getting Started with FMDB and Swift: A Guide.   Avoid Delays and Rejections when Submitting Your App to The Store! Follow my FREE cheat sheets to design, develop,…
END_OF_DOCUMENT_TOKEN_TO_BE_REPLACED

Comparing SwiftUI with storyboards for iOS development - which one is better when.
END_OF_DOCUMENT_TOKEN_TO_BE_REPLACED

Check out my latest guest post at Waldo: How to Create an iOS App ID: 2 Quick and Easy Methods. You will learn: What an App ID is in Apple’s ecosystems. How to create App IDs. What is an App Store ID and how it relates to an App ID. How to find an App…
END_OF_DOCUMENT_TOKEN_TO_BE_REPLACED

By default, Xcode Server signs binaries using a development certificate, not a distribution one. Unfortunately there is no built-in option to make it use a Developer ID certificate. What's the solution?
END_OF_DOCUMENT_TOKEN_TO_BE_REPLACED

Notarization is a fully automated process, unlike going through the App Store which involves manual human review. At least it's automated in Apple's side. However it could consume a non-negligible amount of brain bandwidth in your side. How about automating it?
END_OF_DOCUMENT_TOKEN_TO_BE_REPLACED

Continuous testing is paramount to ship serous software. Yet continuously running tests is a pensive productivity plight. Is it possible to automate testing? Yes you can.
END_OF_DOCUMENT_TOKEN_TO_BE_REPLACED

Xcode 13 brought a new notarization tool. What is it and how much better compared to the old one?
END_OF_DOCUMENT_TOKEN_TO_BE_REPLACED

“I want a REST API for notarization since it’s impossible to parse text coming from the notarization tool reliably.” What if I say that the command line API is the best method for integration with build pipelines? Read on to find out more.
END_OF_DOCUMENT_TOKEN_TO_BE_REPLACED

Notarization may take just a few clicks in Xcode, but this takes time and a security risk. You include notarization as part of your continuous delivery pipeline. Here's how.
END_OF_DOCUMENT_TOKEN_TO_BE_REPLACED

Distributing binaries for macOS outside the App Store requires registering it with Apple beforehand—notarizing it. But do you know what can be submitted for notarization?
END_OF_DOCUMENT_TOKEN_TO_BE_REPLACED

A popular image processing library has a vulnerability that can cause denial of service by a maliciously-crafted file causing the application to consume too much memory. Should you upgrade or is there another solution?
END_OF_DOCUMENT_TOKEN_TO_BE_REPLACED

The App Store Small Business Program offers lowered commission cost with one big caveat: no app transfer. But apps graduating from a "hobby" into a "small business" would definitely involve transferring ownership. Read how to transfer apps without engaging in the app transfer process and losing out on the program's benefits.
END_OF_DOCUMENT_TOKEN_TO_BE_REPLACED

Compiled code can conclude the instruction set through conditional compilation. But what about processor-independent scripts? Finding out the current native processor architecture and emulation status thereof would be very useful in build systems that doesn't support cross-compilations. Find out how a shell script can find out whether it is running under Apple's processor, Intel, or emulated.
END_OF_DOCUMENT_TOKEN_TO_BE_REPLACED

Being in the "bleeding edge" has its drawbacks in addition to benefits. Blazing a fresh trail means it's more rough and plenty of unknowns. Similarly in open source software, support for the ARM architecture is slim and even slimmer on the Mac. But there is a way to run "legacy" Intel-only command line apps on the Mac.
END_OF_DOCUMENT_TOKEN_TO_BE_REPLACED

Distributing macOS apps as ZIP archives has been quaint since Sierra. Today’s macOS packaging requirements mandates notarization, otherwise it would say that your app is suspicious. This often means distributing apps within disk images since this container format can be signed, notarized, and stapled.
END_OF_DOCUMENT_TOKEN_TO_BE_REPLACED

Publishing similar apps is considered spamming. Yet there are valid reasons to develop multiple apps from the same code base. Here is what you need to know to avoid being labeled as spammer by app reviewers.
END_OF_DOCUMENT_TOKEN_TO_BE_REPLACED

Some developers' app updates were rejected from the App Store because their apps look similar. Worse, some others were marked as spammer due to publishing apps that looks like another developer's app. How can you avoid this?
END_OF_DOCUMENT_TOKEN_TO_BE_REPLACED