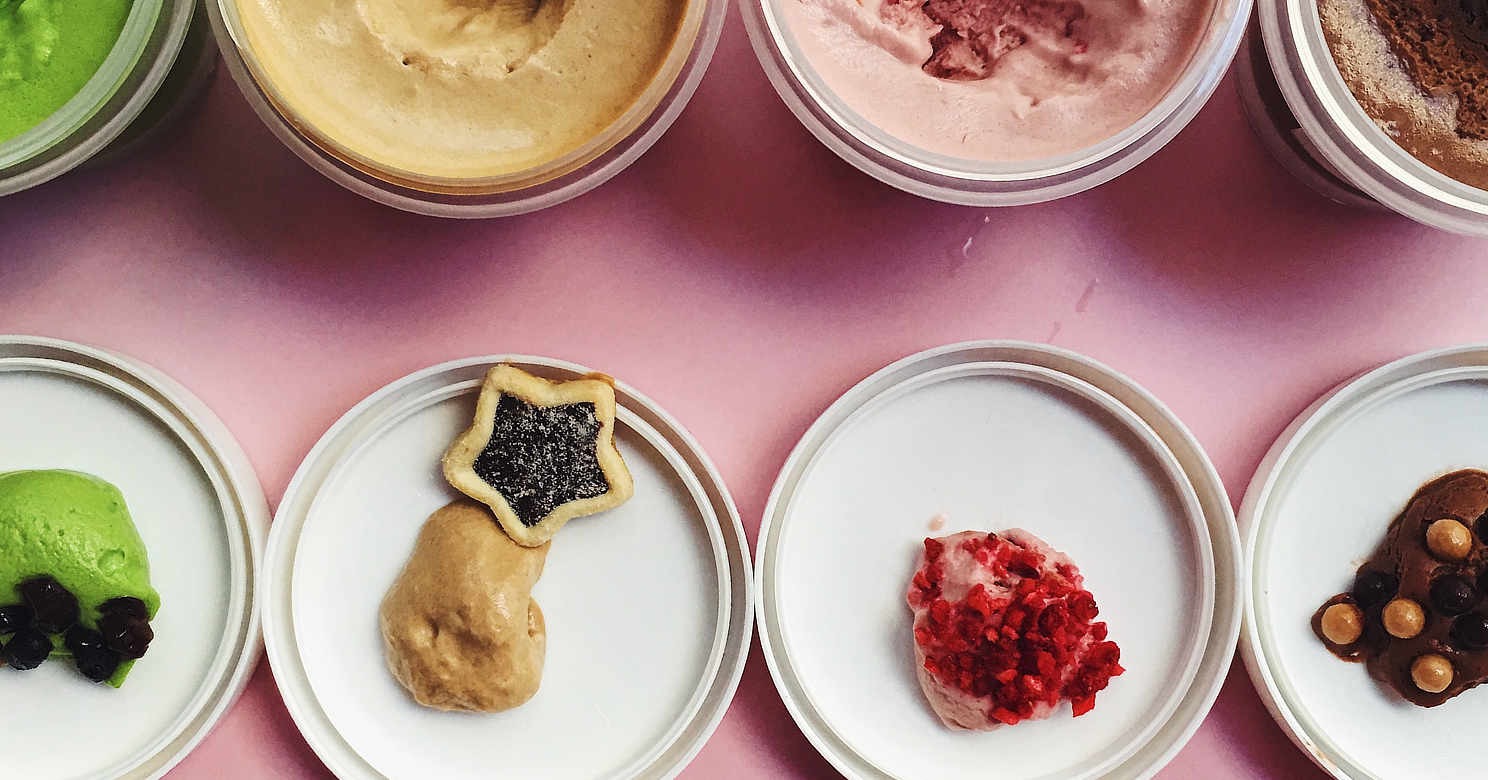 How to Provide Free Time-Limited Trials in the App Store

Providing “lite” version of apps had been the strategy to provide free trials since the dawn of the App Store. However these reduced-functionality apps fall short on demonstrating its full capabilities, which in itself be ineffective in enticing the user to buy. Fortunately that is no longer the only option available for App Store apps.

Being an independent developer you can’t rely too much on 3rd party reviews to sell your apps. These writers may not be in the same audience as your target market, hence would just look at your app “on its surface” and not giving it a justifiable in-depth review. More often than not, you would need potential users to review the app for themselves to determine its suitability.

If only you could give out samplers of your apps to the right potential users — so that they can rightly decide for themselves whether they want to be your customers. But how can you give out these samplers without giving out the shop? You could have “demo version” with reduced feature-set. But by giving a crippled version of the app, the user won’t be able to evaluate it to the fullest. You could be selling yourself short if the user perceive the demo app as “all there is to it”.

How about a way for the user to “test drive” the app for a full 30 days without any feature limitations? This is the tried-and-true “shareware” distribution model that has been around since the era of floppy disks.

But how to do free trials in the App Store? Historically App Store’s reviewers had been disallowing trials and demo to the extent that apps must not have these wordings in their descriptions and user interface language.

But that’s in the past.

As confirmed by the App Store Review Guidelines, section 3.1.1(viii) you can have free trials in the App Store. This is done through in-app purchases. Here is a quote from the guidelines:

Non-subscription apps may offer a free time-based trial period before presenting a full unlock option by setting up a Non-Consumable IAP item at Price Tier 0 that follows the naming convention: “XX-day Trial.” Prior to the start of the trial, your app must clearly identify its duration, the content or services that will no longer be accessible when the trial ends, and any downstream charges the user would need to pay for full functionality.

What’s great of doing trial through iAP is that now there’s a straightforward way to ensure that a user had consumed his trial period and prevent re-activation of the trial period even if the app gets uninstalled and then re-installed again. No more resorting to shenanigans like placing discreet files in hidden locations to mark the user’s trial period like you may have done in the past.

Now you can be sure that a natural person had already elapsed the free trial period provided to him/her and the app would stay dormant until purchase – even if the app gets reinstalled. Say goodbye to free-riders and hello to better conversion rates!

How to do this? Read on.

An App Store application provides time-limited trials by being available as a free app. Furthermore it has a pair of non-consumable in-app purchase products:

After downloading the product, direct the user to “buy” the “$0 trial” in-app purchase. This would unlock all features in the app and start the trial period.

If the user doesn’t buy any of the “real” in-app purchases, then the app would disable features automatically after the trial period elapsed. This is controlled by looking at the “purchase date” of the “$0 trial” in-app purchase product. In other words, if today’s date is greater than, say, 30 days after the purchase of the “$0 Trial” product and there is no “real money” product purchased, then disable the app.

However App Review often mandates that the app would need to still be “useful” in some capacity even after the trial period had ended. One way would be as a read-only viewer for its own file type.

OmniGraffle – a business and technical drawing application – is an example famous app which does free trials like this. The app has a “$0 trial” in-app purchase that unlocks the functionality of the app for 14 days. Should the free-trial period expires, the app remains functional as a viewer that can open, print, and export its files – i.e. the creation and editing features are disabled. The user can also download the app and use it as a viewer without starting the free trial. 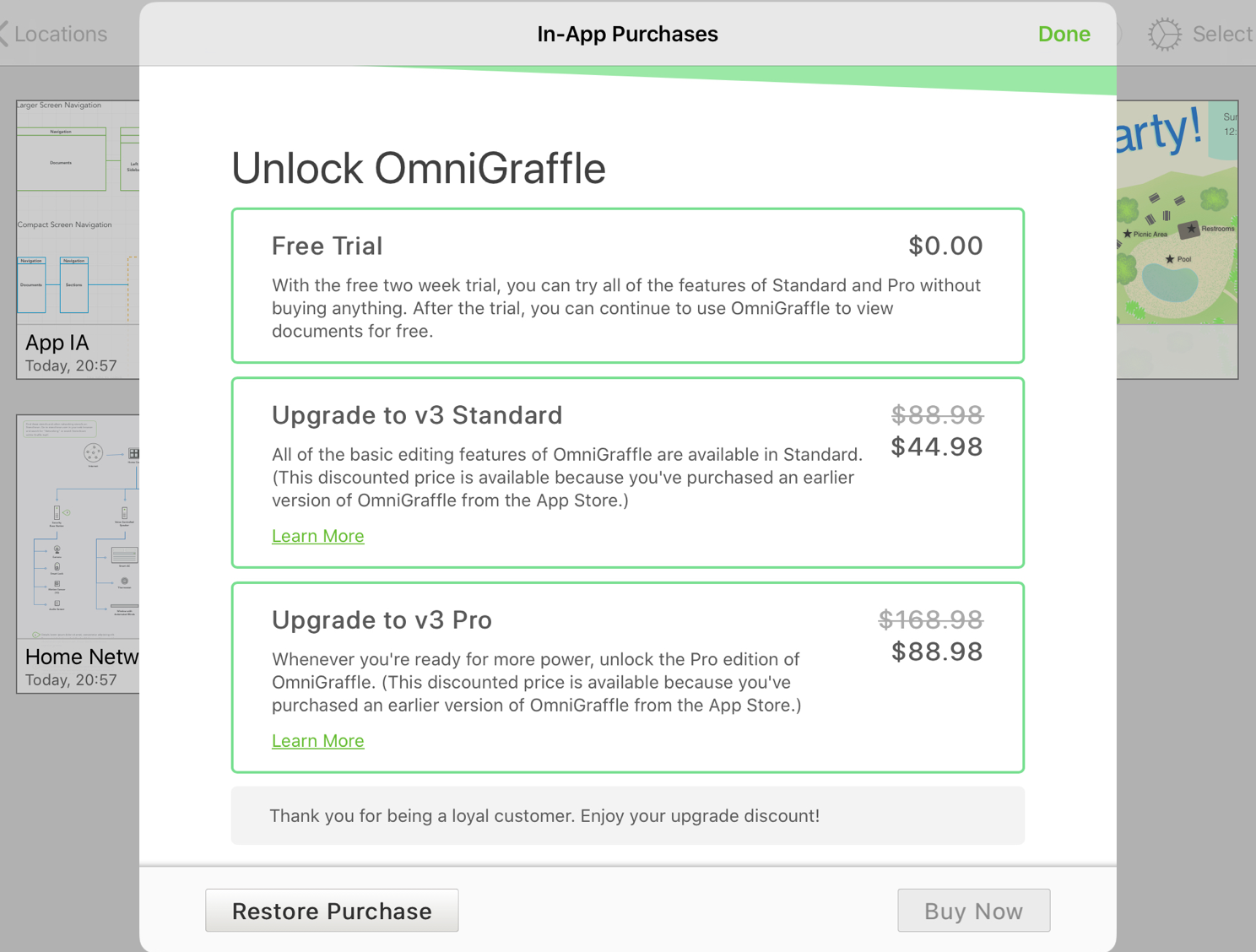 Do you have an app that’s due for upgrade? Perhaps you’re having an idea for your next great app? Stop making “lite editions” for new app releases and provide your customers with a full-featured time-limited trials instead. Remember to keep customers loyal by offering discounted upgrade pricing using in-app purchases.