Compiled code can conclude the instruction set through conditional compilation. But what about processor-independent scripts? Finding out the current native processor architecture and emulation status thereof would be very useful in build systems that doesn’t support cross-compilations. Find out how a shell script can find out whether it is running under Apple’s processor, Intel, or emulated.

Apple Silicon laptops debuted with outstanding performance numbers – being among the highest-performing laptop microprocessors as measured by GeekBench and many others. The M1 processors‘ power efficiencies are very much commendable – potentially providing 10 hours of continuous video-conferencing time on a single charge. Although the user’s psychological power would probably peter out prior to the portable 😅.

But with great power comes… great lack of support?

“ … my development environment requires a few of the GNU developer tools … these tools crash with an Abort Trap: 6 error …”
“ … Every CMake project needs significant hacks. “
“ … Is there a Fortran compiler available? I tried building gfortran, but ran into some difficulty … What’s the current recommendation for building Fortran dependencies for Apple Silicon?“
“ … The GCC project is coded in custom assembly for each chip … the parts that emit assembly … ”

Sadly open source support for the speedy silicon is still stuttering. Large portions of these software are dependent on compilers that have yet to fully support the architecture. Examples include the GNU Compiler Collection (gcc) and Fortran — that latter one being an established yet hidden worker bee behind many numerical computing collections. 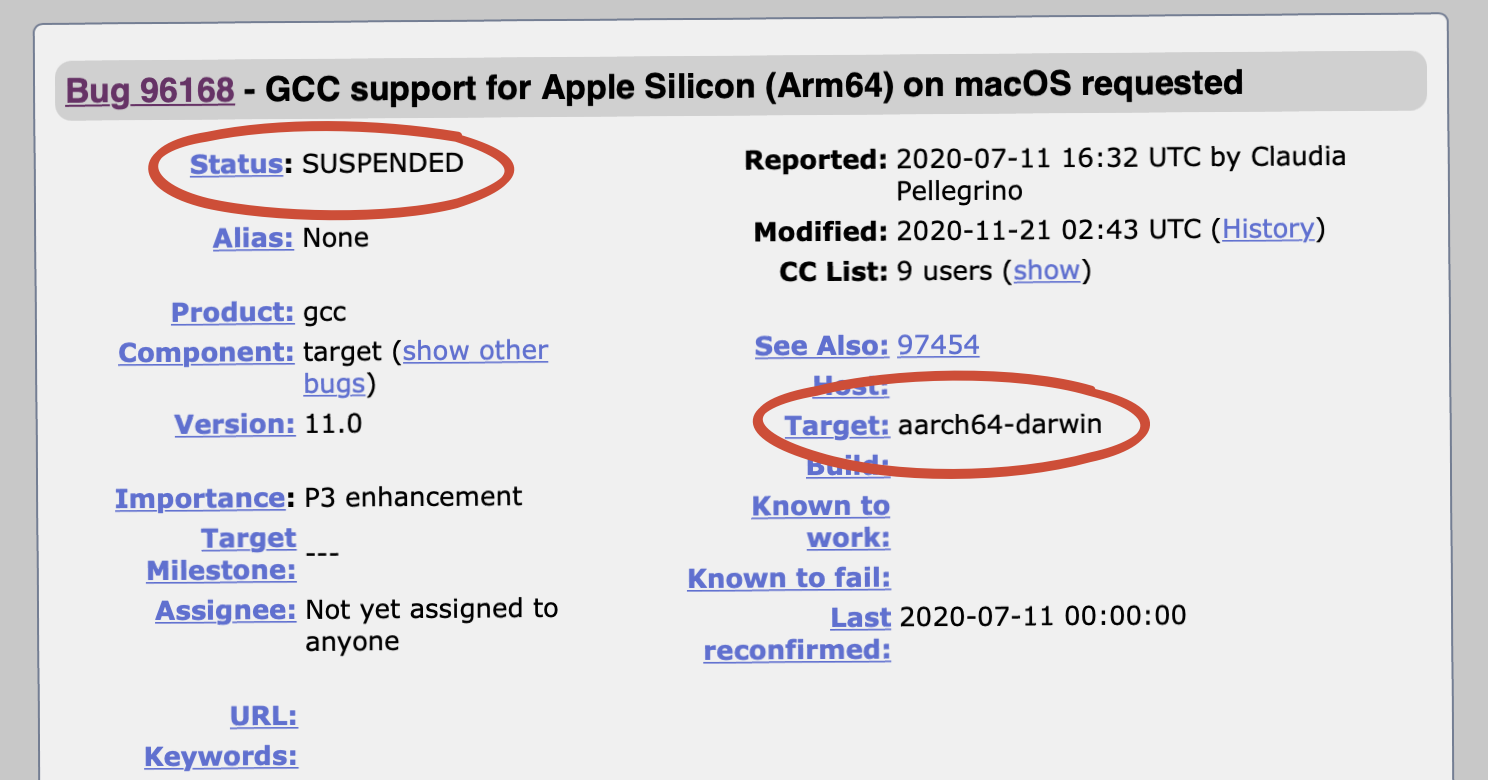 It looks like large portions of open source software would still need to run under Rosetta 2, the Mac’s emulation (and translation) system to run Intel-based applications, in the foreseeable future. At least until the open source communities at large internalizes importance to support the architecture.

A compiled native application would always know what the CPU architecture it is running on. It was built for the architecture in the first place. Its source code uses conditional compilation to detect its target architecture and thus branches accordingly at build time.

However a script doesn’t have the same benefit. Being interpreted and cross-architecture, the program would need to determine what is the underlying architecture as at run-time.

Why is this important? Script interpreters built-in to macOS (such as shell scripts and OSA interpreters) are Universal Binaries. In an Apple Silicon mac, they can run in both Arm and Intel modes. By default macOS preserves the architecture of process subtrees. An Intel process (under Rosetta 2) would launch sub-processes in Intel mode when possible. Likewise an Arm process would prefer the arm64 slice of universal binaries that it launches.

This process architecture preservation is useful most of the time. But it could present a problem when running a complex build system having portions need to run in Intel mode yet some other portions would run in Arm mode. There would be times when a build script would need to find out what is the current mode and act accordingly, such as setting a different folder path appropriate for the respective architecture target.

Wouldn’t it be great if a script could detect whether it is running under native Intel, Rosetta 2, or native Arm?

What about forcing Rosetta mode for a few lagging sub-projects that have not support the new architecture?

Read on to find out how.

The trusty uname POSIX utility would show the CPU architecture. When running on an Apple Silicon mac, the command uname -m would print arm64 whereas on Intel it would say x86_64. Although it does not differentiate between Genuine Intel and Rosetta 2.

Fortunately Rosetta 2 provides a peephole that identifies itself from processes running under it. This is the sysctl.proc_translated flag that can be accessed through the sysctl -n command.

Using these these two commands, I’ve put together a Z Shell script that shows which processor (real or emulated) that the script is running on.

Arm-based Macs can run both Apple Silicon and Intel binaries. In a Universal 2 binary containing both Arm and Intel slices, the computer can run it both natively and under Rosetta 2.

Forcing command-line apps to run to under Intel mode could be useful to build projects that are not compatible to cross-compilation and hasn’t supported Apple Silicon natively. It’ll let cross-platform build scripts to see that it is running on an Intel Mac and let it run as it has always been since 2007.

You can use the arch command to start processes to run in another instruction set different from its parent process, when support is present (that is, the universal binary has the appropriate architecture slice and the system can execute that alternative slice).

For example, the following command would run the shell under Rosetta 2 in an Apple Silicon mac. Therefore all other applications started by this shell session would run as an Intel application and system calls such as uname would report an Intel processor.

In contrast the following would force run the shell in Arm native mode. This could be useful when a script running in Intel mode would need to switch back to running natively.

Of course in an Intel-based mac, the second command would fail with an arch: Unknown architecture: arm64 error. Apple do not provide arm64 emulation for Intel processors as of this writing.

Another big change with macOS “Big Sur” is the version number. It has gone up to 11 as well as a new product name, “macOS”. This could break some scripts that expects the operating system name to be “Mac OS X” and version number start with 10, as it has been since 2001.

To alleviate this, Apple provides a special environment variable SYSTEM_VERSION_COMPAT. When it has the value 1, the operating system would report a name of “Mac OS X and 10.16 as its version. 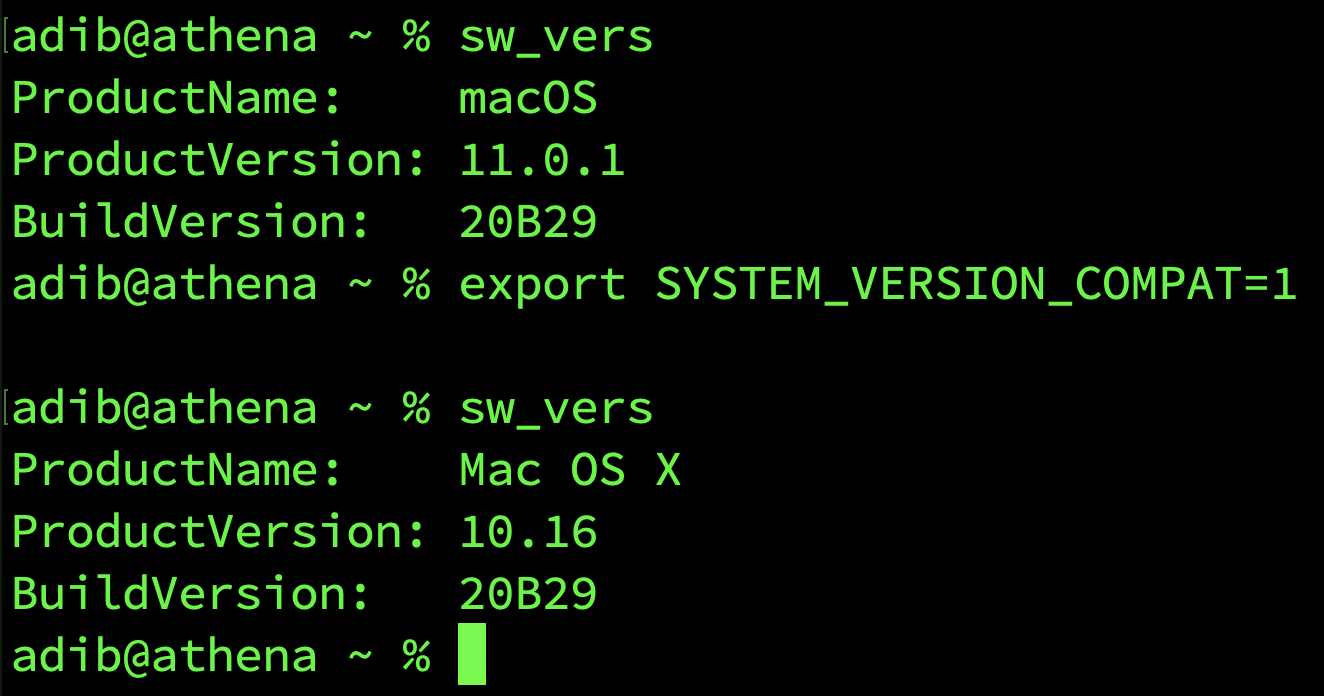 If you’re trying to build an open source application under Big Sur using an Apple Silicon processor, try forcing it to run under Rosetta 2. That should isolate whether the problem comes from the operating system or the processor architecture.

If you’re working on open source projects, maybe it’s a good time to update it to support Apple Silicon. These shell script commands could help you in adopting your build system in detecting the true processor architecture that it runs on and make the appropriate decision.

My latest guest post for Waldo shows you how to use SQLite databases using Swift through Gus Muller’s FMDB library.   Head to Waldo for the article: Getting Started with FMDB and Swift: A Guide.   Avoid Delays and Rejections when Submitting Your App to The Store! Follow my FREE cheat sheets to design, develop,…
END_OF_DOCUMENT_TOKEN_TO_BE_REPLACED

Comparing SwiftUI with storyboards for iOS development - which one is better when.
END_OF_DOCUMENT_TOKEN_TO_BE_REPLACED

Check out my latest guest post at Waldo: How to Create an iOS App ID: 2 Quick and Easy Methods. You will learn: What an App ID is in Apple’s ecosystems. How to create App IDs. What is an App Store ID and how it relates to an App ID. How to find an App…
END_OF_DOCUMENT_TOKEN_TO_BE_REPLACED

By default, Xcode Server signs binaries using a development certificate, not a distribution one. Unfortunately there is no built-in option to make it use a Developer ID certificate. What's the solution?
END_OF_DOCUMENT_TOKEN_TO_BE_REPLACED

Notarization is a fully automated process, unlike going through the App Store which involves manual human review. At least it's automated in Apple's side. However it could consume a non-negligible amount of brain bandwidth in your side. How about automating it?
END_OF_DOCUMENT_TOKEN_TO_BE_REPLACED

Continuous testing is paramount to ship serous software. Yet continuously running tests is a pensive productivity plight. Is it possible to automate testing? Yes you can.
END_OF_DOCUMENT_TOKEN_TO_BE_REPLACED

Xcode 13 brought a new notarization tool. What is it and how much better compared to the old one?
END_OF_DOCUMENT_TOKEN_TO_BE_REPLACED

“I want a REST API for notarization since it’s impossible to parse text coming from the notarization tool reliably.” What if I say that the command line API is the best method for integration with build pipelines? Read on to find out more.
END_OF_DOCUMENT_TOKEN_TO_BE_REPLACED

Notarization may take just a few clicks in Xcode, but this takes time and a security risk. You include notarization as part of your continuous delivery pipeline. Here's how.
END_OF_DOCUMENT_TOKEN_TO_BE_REPLACED

Distributing binaries for macOS outside the App Store requires registering it with Apple beforehand—notarizing it. But do you know what can be submitted for notarization?
END_OF_DOCUMENT_TOKEN_TO_BE_REPLACED

A popular image processing library has a vulnerability that can cause denial of service by a maliciously-crafted file causing the application to consume too much memory. Should you upgrade or is there another solution?
END_OF_DOCUMENT_TOKEN_TO_BE_REPLACED

The App Store Small Business Program offers lowered commission cost with one big caveat: no app transfer. But apps graduating from a "hobby" into a "small business" would definitely involve transferring ownership. Read how to transfer apps without engaging in the app transfer process and losing out on the program's benefits.
END_OF_DOCUMENT_TOKEN_TO_BE_REPLACED

Compiled code can conclude the instruction set through conditional compilation. But what about processor-independent scripts? Finding out the current native processor architecture and emulation status thereof would be very useful in build systems that doesn't support cross-compilations. Find out how a shell script can find out whether it is running under Apple's processor, Intel, or emulated.

Being in the "bleeding edge" has its drawbacks in addition to benefits. Blazing a fresh trail means it's more rough and plenty of unknowns. Similarly in open source software, support for the ARM architecture is slim and even slimmer on the Mac. But there is a way to run "legacy" Intel-only command line apps on the Mac.
END_OF_DOCUMENT_TOKEN_TO_BE_REPLACED

Distributing macOS apps as ZIP archives has been quaint since Sierra. Today’s macOS packaging requirements mandates notarization, otherwise it would say that your app is suspicious. This often means distributing apps within disk images since this container format can be signed, notarized, and stapled.
END_OF_DOCUMENT_TOKEN_TO_BE_REPLACED

Publishing similar apps is considered spamming. Yet there are valid reasons to develop multiple apps from the same code base. Here is what you need to know to avoid being labeled as spammer by app reviewers.
END_OF_DOCUMENT_TOKEN_TO_BE_REPLACED

Some developers' app updates were rejected from the App Store because their apps look similar. Worse, some others were marked as spammer due to publishing apps that looks like another developer's app. How can you avoid this?
END_OF_DOCUMENT_TOKEN_TO_BE_REPLACED