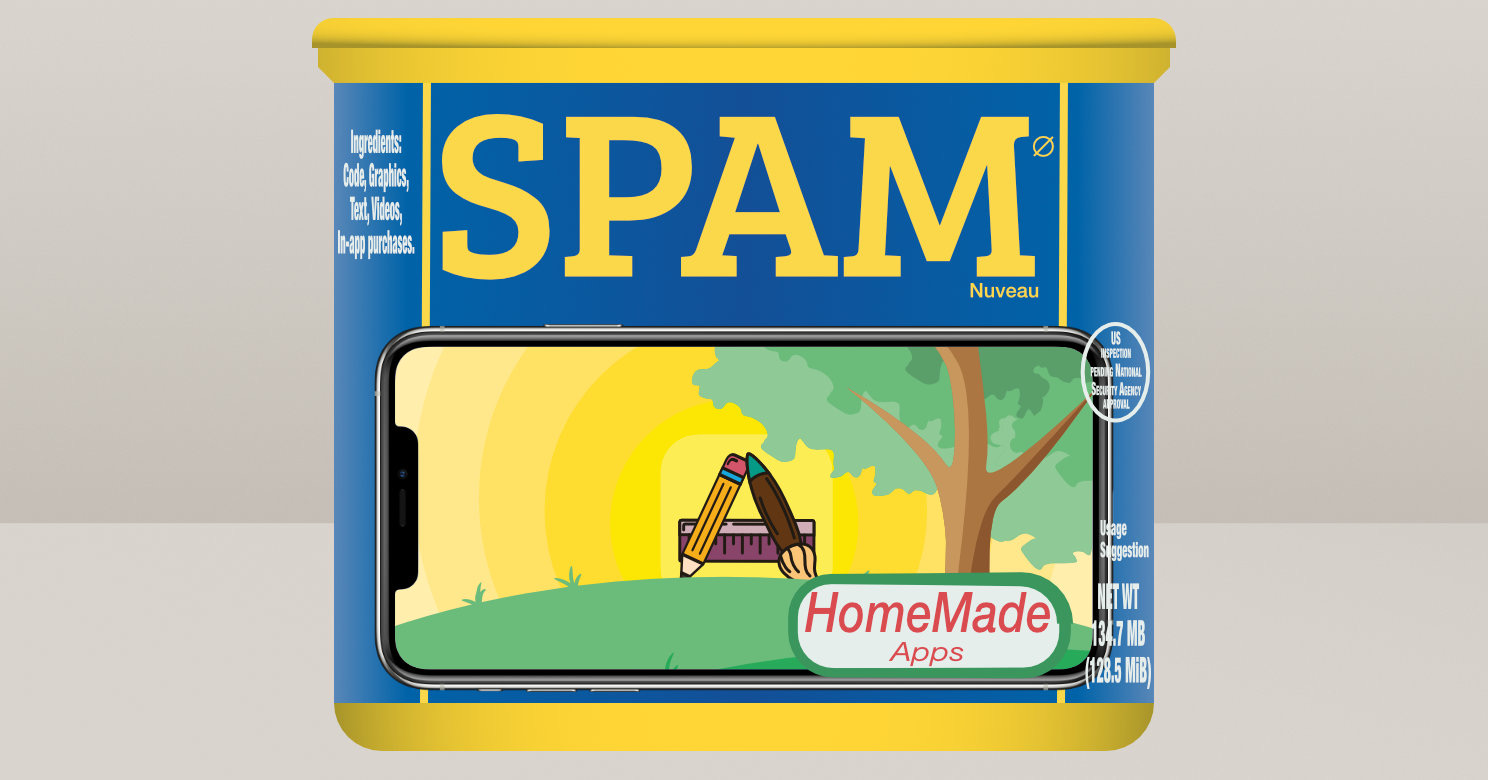 Publishing similar apps is considered spamming. Yet there are valid reasons to develop multiple apps from the same code base. Here is what you need to know to avoid being labeled as spammer by app reviewers.

“We create test prep apps for many certifications and have recently run into the 4.3 Spam rejection problem.”

“We make apps designed to pass vehicle theory tests … Apple is asking us to bundle cars, motorcycles, lorries, etc into one container app…”

“We publish magazines from very different publishers…. Some apps were rejected and the reviewer said it doesn’t follow the 4.2/4.3 guidelines and recommend that we put all apps inside a container…”

“How can I develop a unique feature app for each customers with low budget? Container app in some cases is not an option.”

Wouldn’t it be frustrating when your update got rejected, the reviewer slapped a Guideline 4.3 rejection on you and said that you’re spamming the App Store?

How can you develop one app and sell it to multiple small businesses? A fast-food take-out chain’s app would likely be similar to another, apart from the particular menu on offer, location availability, and branding. Likewise an app for distributing magazines or newspapers won’t be that different from one another, apart from the magazines or newspapers themselves. One church’s mobile app would likely have almost identical use cases to one another — one could argue that the set of use cases may even extend to other organized religions.

Multiple test-prep apps can be built from the same code base. Those apps would be different in their respective coaching content, but same code nonetheless. But they have different audiences — it doesn’t make sense to bundle everything together make one audience pay for test-preps of all the other audiences.

Educational games face a similar problem. Each game is designed for a certain child’s age. It doesn’t make sense to make parents pay for the entire set of games for all available ages when their children are within a certain age range.

But Apple seems to view these kinds of apps as spam since they are identical — a consequence of being developed from an identical code base. But wouldn’t it be great if you can leverage the same code base and deploy multiple apps for these small businesses and organizations? What if you can target multiple segments of the test-prep and educational games market yet not re-create apps for each segment from scratch?

Yes, there are ways accomplish those. Yet you need to have the know-how and tread carefully or face “Guideline 4.3: Spam” rejection.

When you are publishing a series of similar apps for small businesses and your clients want their own branding and presence on the App Store, you would need for each client to have their own Apple Developer Program (ADP) account. This is the white-labeled app business model. Similarly if you are making apps as a companion to a basic hardware that your company provide as OEM to other manufacturers — devices like digital photo frames often fall into this category.

Under no circumstances you should publish white-label apps under your own company’s developer account or risk it being flagged as a spammer. Your clients would need to manage their own legal relationships with Apple and their respective users.

Originally Apple rejected these white-label apps business model. Until a letter from a member of congress made it change its mind. Read How to Publish White-Label Apps in the App Store for more information.

When you have multiple apps that targets different markets but developed from the same code base, you would need to migrate all those apps into a single container app. Create a new “super-app” having all the functionalities for all market segments and activate the correct content by having a selection menu during onboarding (first install). This strategy would apply to test-prep apps, city guide apps, age-specific educational games, etc.

I’ve written a guide on how to migrate your existing apps into a new container app. Which includes:

Finally if the above doesn’t apply and app reviewer doesn’t cite a specific reason for the Guideline 4.3 rejection, maybe your app is not unique enough. Keep in mind that reviewers has about five minutes to pass/reject an app and if the reviewer seen something similar before then he/she would be keen to mark your app as spam. Moreover, apps not having an English localization tend to be more prone to this.

I’ve written a guide to prevent your app from being seen as spam. This includes verifying the design among your own apps and comparing it with other competing apps.

… avoid piling on to a category that is already saturated; the App Store has enough fart, burp, flashlight, fortune telling, dating, and Kama Sutra apps, etc…

If you’ve recently had a Guideline 4.3 Spam rejection, then these are the three solutions that you can approach depending on your particular situation:

When you are planning to make a series of similar apps, remember that Apple dislikes the idea. Consider choosing either the Container App or the White-Label App routes, depending on the app’s business model.

0 thoughts on “How to Pass App Store Review: Guideline 4.3 Spam”

Check out my latest guest post at Waldo: How to Create an iOS App ID: 2 Quick and Easy Methods. You will learn: What an App ID is in Apple’s ecosystems. How to create App IDs. What is an App Store ID and how it relates to an App ID. How to find an App…
END_OF_DOCUMENT_TOKEN_TO_BE_REPLACED

By default, Xcode Server signs binaries using a development certificate, not a distribution one. Unfortunately there is no built-in option to make it use a Developer ID certificate. What's the solution?
END_OF_DOCUMENT_TOKEN_TO_BE_REPLACED

Notarization is a fully automated process, unlike going through the App Store which involves manual human review. At least it's automated in Apple's side. However it could consume a non-negligible amount of brain bandwidth in your side. How about automating it?
END_OF_DOCUMENT_TOKEN_TO_BE_REPLACED

Continuous testing is paramount to ship serous software. Yet continuously running tests is a pensive productivity plight. Is it possible to automate testing? Yes you can.
END_OF_DOCUMENT_TOKEN_TO_BE_REPLACED

Xcode 13 brought a new notarization tool. What is it and how much better compared to the old one?
END_OF_DOCUMENT_TOKEN_TO_BE_REPLACED

“I want a REST API for notarization since it’s impossible to parse text coming from the notarization tool reliably.” What if I say that the command line API is the best method for integration with build pipelines? Read on to find out more.
END_OF_DOCUMENT_TOKEN_TO_BE_REPLACED

Notarization may take just a few clicks in Xcode, but this takes time and a security risk. You include notarization as part of your continuous delivery pipeline. Here's how.
END_OF_DOCUMENT_TOKEN_TO_BE_REPLACED

Distributing binaries for macOS outside the App Store requires registering it with Apple beforehand—notarizing it. But do you know what can be submitted for notarization?
END_OF_DOCUMENT_TOKEN_TO_BE_REPLACED

A popular image processing library has a vulnerability that can cause denial of service by a maliciously-crafted file causing the application to consume too much memory. Should you upgrade or is there another solution?
END_OF_DOCUMENT_TOKEN_TO_BE_REPLACED

The App Store Small Business Program offers lowered commission cost with one big caveat: no app transfer. But apps graduating from a "hobby" into a "small business" would definitely involve transferring ownership. Read how to transfer apps without engaging in the app transfer process and losing out on the program's benefits.
END_OF_DOCUMENT_TOKEN_TO_BE_REPLACED

Compiled code can conclude the instruction set through conditional compilation. But what about processor-independent scripts? Finding out the current native processor architecture and emulation status thereof would be very useful in build systems that doesn't support cross-compilations. Find out how a shell script can find out whether it is running under Apple's processor, Intel, or emulated.
END_OF_DOCUMENT_TOKEN_TO_BE_REPLACED

Being in the "bleeding edge" has its drawbacks in addition to benefits. Blazing a fresh trail means it's more rough and plenty of unknowns. Similarly in open source software, support for the ARM architecture is slim and even slimmer on the Mac. But there is a way to run "legacy" Intel-only command line apps on the Mac.
END_OF_DOCUMENT_TOKEN_TO_BE_REPLACED

Distributing macOS apps as ZIP archives has been quaint since Sierra. Today’s macOS packaging requirements mandates notarization, otherwise it would say that your app is suspicious. This often means distributing apps within disk images since this container format can be signed, notarized, and stapled.
END_OF_DOCUMENT_TOKEN_TO_BE_REPLACED

Publishing similar apps is considered spamming. Yet there are valid reasons to develop multiple apps from the same code base. Here is what you need to know to avoid being labeled as spammer by app reviewers.

Some developers' app updates were rejected from the App Store because their apps look similar. Worse, some others were marked as spammer due to publishing apps that looks like another developer's app. How can you avoid this?
END_OF_DOCUMENT_TOKEN_TO_BE_REPLACED

It would be a big blow when Apple rejects your suite of apps, call it "spam" and tell you to move into a container app. If this is happening to you, then this article would be a solution to your predicament.
END_OF_DOCUMENT_TOKEN_TO_BE_REPLACED

Some people probably wouldn't have found success through social media. Learn the importance to present your best self in social media and how to do it.
END_OF_DOCUMENT_TOKEN_TO_BE_REPLACED