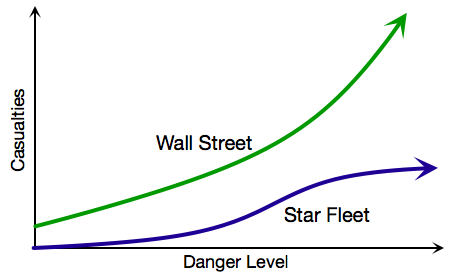 The Captain and the CEO – Starfleet vs Wall Street

Is your dayjob company having financial troubles? Beware that CEOs, unlike Starfleet captains, are not leaders of a “happy family”. When things go bad, the cargo is everything and the crew is expendable.

“All hands, brace for impact!” That is what Captain Picard of the USS Enterprise would cry out upon an incoming torpedo that he couldn’t dodge. Faced with a similar situation, what would CEO of Acme Capital Pte Ltd, Mr Rob Ruby would say? I’ll bet it will be along the lines of “Times are tough but the future is promising” while behind the scenes he’ll be throwing people out of the airlock “to reduce payload and improve maneuverability”.

Now you might be thinking, what is the relevance of this hypothetical situation involving fictitious people with your life? For one, the world’s economy is passing through a metaphorical asteroid belt and we’ve seen some vessels that took one too many hits and went under – the likes of Bear Stearns and Lehman Brothers. Personally a few of my colleagues got the airlock treatment and I can’t be too confident myself. Since most of us aren’t working inside an expeditionary spaceship lead by a wise captain like Mr. Picard, the rest of this article will be about the starkly difference between Captain Picard and Mr. Ruby and what us mere mortals can do should our vessel lies within a collision course with an asteroid and you only have Mr. Ruby as captain.

First of all, USS Enterprise is an expedition starship which goal is to obtain knowledge for the betterment of its crew and entire humanity. The primary shareholders of the ship are the crew themselves and thus the captain serves to protect the crew along with the ship. At perilous times, he’ll be the last person to abandon the ship after all crewmembers have safely evacuated.

On the other hand, Acme Capital Pte Ltd is more like a Ferengi trade vessel which seeks the most margin at just about any expense. A Ferengi captain serves primarily the checkbooks of the ship’s benefactors even at the expense of the crew – as worker exploitation is viewed as benevolence in Ferengi culture. When times go bad, the cargo will take precedence over the crew. Sadly, often the same goes in real life.

Thus a captain’s role is to lead the crew and protect the ship with its contents whereas the CEO’s role is to protect and grow shareholder value. That is, in an ideal world. There is always the so-called “principal-agent problem” that happens whenever someone hires someone else to do the former’s bidding. In many cases the CEO will protect his own interests first before looking after shareholder value. This flaw in capitalism theory is even admitted by Alan Greenspan in his October 23 (2008) congressional testimony [1] in which he acknowledged that financial institutions didn’t protect shareholders and investments as well as expected. I guess the same issue may as well plague starship captains, if Captain Picard weren’t an idealized Hollywood character.

A fairly recent example is with Yahoo’s former-to-be CEO, Jerry Yang. Yahoo is already in heavy fire from Google and began losing it’s competitive edge since Google starts becoming more than a search engine company [4]. Microsoft on the other hand is looking to enter the Internet-advertising business and a few times offered to buy Yahoo at significantly above the market value [2]. Mr Yang rejected and said it was undervalued in a very uplifting e-mail to employees in February 2008 [3]. Yet in the same time frame there was a plan for some retrenchments [5] and in October the same year, the company shed 10% of its workforce [6].

What was Mr Yang’s motivation? We can only guess as the depth of the ocean may be measured but the depth of someone’s heart is unfathomable. My opinion is that he simply doesn’t like to take orders from Steve Ballmer, CEO of Microsoft. When your net worth is already greater than, say for example, US$ 1 billion, money probably won’t be a high priority for you.

Similar stories of over-optimistic leaders at the expense of foot soldiers unfolded at Lehman and AIG. Richard S. Fuld Jr, former CEO of Lehman Brothers, was under questioning why he painted a rosy picture of the company’s future yet it was deeply exposed to sub-prime mortgages [7]. AIG’s chief executive demanded a $5 million bonus and a $15 million golden parachute award in March 2008 and we all know that the government had to bail out the company for $85 billion with taxpayer’s money later in the year [8].

One clever tactic of dampening the news and financial impact of layoffs is by hiring “temporary full-time workers”. That is hiring a full-time employee without full-time benefits and the company can get rid of them without needing to tell anyone. The US Securities and Exchange Commission requires changes in permanent employee to be reported, but not so for temporary employees – even when the temporary employee in question have been with the company for several years. Furthermore in many cases letting go permanent employees require giving some sort of severance compensation (as per government regulation) whereas the same doesn’t normally apply to those classified as “temporary workers”. Among others, Google did this and recently laid off almost a third of its workers without much coverage since most of them are “temporary employees” [9]. This relatively popular technique was also recently used by BMW [10] and Sony [11].

So facing this harsh reality, what should we do? There are three advises that are actually pretty old but might worth regurgitating.

One of my idols that implements all these advises successfully is Scott Adams, author of the Dilbert comic series [12]. A minor celebrity often invited to various talks and speeches, he developed Dilbert for six years “on-the-side” while he was working for Pacific Bell. Even after the success of Dilbert, he continues diversifying and reaching further beyond Dilbert-related works (including having vegetarian food businesses). Those who read his works and blog should know how skeptical he is – often to the extent of being satirical.

As for myself, currently I develop and market software for the Apple iPhone and iPod touch “on the side”. The money isn’t great (yet) and currently not a viable replacement for my day job, but it’s still better than not diversifying. Furthermore I personally know a few people who have side gigs. A colleague of my girlfriend has a band and available for hire in weekend events such as weddings and the like. A more senior UK colleague of mine co-owns and operates an Indian restaurant in London apart from his day job as a Development Lead. (Shameless plug: iPhone and iPod touch users, please buy my products at http://basilsalad.com – free copies available for reviewers).

So there you have it: the difference between Captain Picard and Mr Ruby the CEO and what do about it. This topic may be familiar and even old story for Generation X and Generation Y individuals, but to my surprise this is a foreign idea to a lot of my fellow worker bees. Then again, it could be just a non-conformer’s rants and raves. But I do hope this is useful for you and got you thinking.

My latest guest post for Waldo shows you how to use SQLite databases using Swift through Gus Muller’s FMDB library.   Head to Waldo for the article: Getting Started with FMDB and Swift: A Guide.   Avoid Delays and Rejections when Submitting Your App to The Store! Follow my FREE cheat sheets to design, develop,…
END_OF_DOCUMENT_TOKEN_TO_BE_REPLACED

Comparing SwiftUI with storyboards for iOS development - which one is better when.
END_OF_DOCUMENT_TOKEN_TO_BE_REPLACED

Check out my latest guest post at Waldo: How to Create an iOS App ID: 2 Quick and Easy Methods. You will learn: What an App ID is in Apple’s ecosystems. How to create App IDs. What is an App Store ID and how it relates to an App ID. How to find an App…
END_OF_DOCUMENT_TOKEN_TO_BE_REPLACED

By default, Xcode Server signs binaries using a development certificate, not a distribution one. Unfortunately there is no built-in option to make it use a Developer ID certificate. What's the solution?
END_OF_DOCUMENT_TOKEN_TO_BE_REPLACED

Notarization is a fully automated process, unlike going through the App Store which involves manual human review. At least it's automated in Apple's side. However it could consume a non-negligible amount of brain bandwidth in your side. How about automating it?
END_OF_DOCUMENT_TOKEN_TO_BE_REPLACED

Continuous testing is paramount to ship serous software. Yet continuously running tests is a pensive productivity plight. Is it possible to automate testing? Yes you can.
END_OF_DOCUMENT_TOKEN_TO_BE_REPLACED

Xcode 13 brought a new notarization tool. What is it and how much better compared to the old one?
END_OF_DOCUMENT_TOKEN_TO_BE_REPLACED

“I want a REST API for notarization since it’s impossible to parse text coming from the notarization tool reliably.” What if I say that the command line API is the best method for integration with build pipelines? Read on to find out more.
END_OF_DOCUMENT_TOKEN_TO_BE_REPLACED

Notarization may take just a few clicks in Xcode, but this takes time and a security risk. You include notarization as part of your continuous delivery pipeline. Here's how.
END_OF_DOCUMENT_TOKEN_TO_BE_REPLACED

Distributing binaries for macOS outside the App Store requires registering it with Apple beforehand—notarizing it. But do you know what can be submitted for notarization?
END_OF_DOCUMENT_TOKEN_TO_BE_REPLACED

A popular image processing library has a vulnerability that can cause denial of service by a maliciously-crafted file causing the application to consume too much memory. Should you upgrade or is there another solution?
END_OF_DOCUMENT_TOKEN_TO_BE_REPLACED

The App Store Small Business Program offers lowered commission cost with one big caveat: no app transfer. But apps graduating from a "hobby" into a "small business" would definitely involve transferring ownership. Read how to transfer apps without engaging in the app transfer process and losing out on the program's benefits.
END_OF_DOCUMENT_TOKEN_TO_BE_REPLACED

Compiled code can conclude the instruction set through conditional compilation. But what about processor-independent scripts? Finding out the current native processor architecture and emulation status thereof would be very useful in build systems that doesn't support cross-compilations. Find out how a shell script can find out whether it is running under Apple's processor, Intel, or emulated.
END_OF_DOCUMENT_TOKEN_TO_BE_REPLACED

Being in the "bleeding edge" has its drawbacks in addition to benefits. Blazing a fresh trail means it's more rough and plenty of unknowns. Similarly in open source software, support for the ARM architecture is slim and even slimmer on the Mac. But there is a way to run "legacy" Intel-only command line apps on the Mac.
END_OF_DOCUMENT_TOKEN_TO_BE_REPLACED

Distributing macOS apps as ZIP archives has been quaint since Sierra. Today’s macOS packaging requirements mandates notarization, otherwise it would say that your app is suspicious. This often means distributing apps within disk images since this container format can be signed, notarized, and stapled.
END_OF_DOCUMENT_TOKEN_TO_BE_REPLACED

Publishing similar apps is considered spamming. Yet there are valid reasons to develop multiple apps from the same code base. Here is what you need to know to avoid being labeled as spammer by app reviewers.
END_OF_DOCUMENT_TOKEN_TO_BE_REPLACED

Some developers' app updates were rejected from the App Store because their apps look similar. Worse, some others were marked as spammer due to publishing apps that looks like another developer's app. How can you avoid this?
END_OF_DOCUMENT_TOKEN_TO_BE_REPLACED