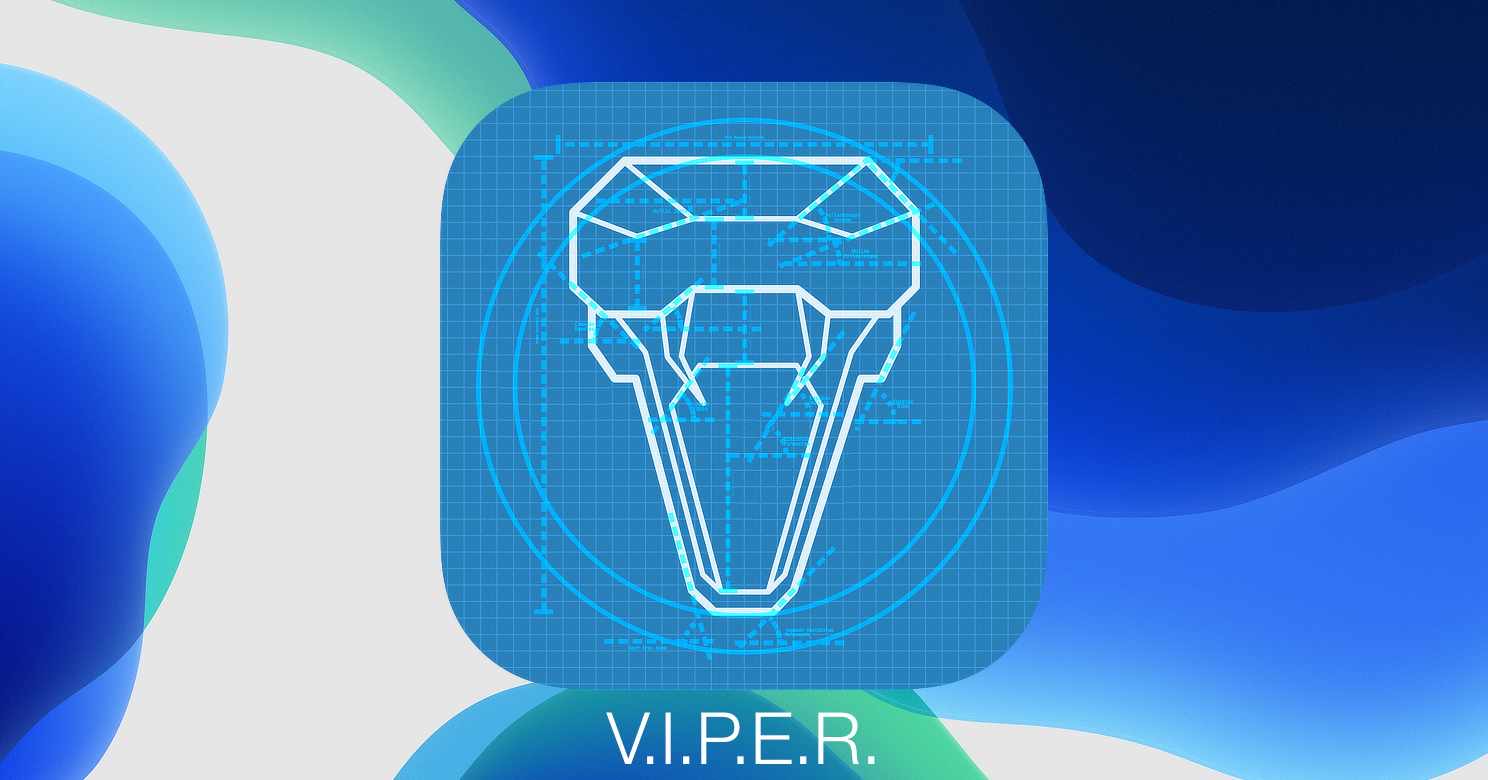 A typical poorly-architected app would feature classes with too many responsibilities and properties. Working in parallel with other developers on these spaghetti sources would be difficult — being magnets for merge conflicts. Likewise, properly unit testing these mega-blobs could be a project in itself.

On the other hand, developing a fully-featured application having an elegant and simple architecture is challenging. As what the late Steve Jobs once said, “Simple can be harder than complex.” It is tempting to cobble most logic into view controller subclasses and not worry on separating concerns into their respective components.

When you’re done reading this article and having practice what you’ll learn on the sample project, you’ll be able to architect applications to solve the problem at hand and make it flexible enough to cater for tomorrow’s challenges. You’ll be able to determine if the code you’ve written in the past followed best practices and have proper separation of concerns so that code you’ll write in the future would be more maintainable and anti-fragile.

The case study is a UIKit application for discovering new popular movies. The app was written using Xcode 11.4.1 and Swift 5. It runs on iPhone, iPad, as well as macOS (Catalina) thanks to Mac Catalyst. The app’s source code is structured with Clean Architecture and VIPER in mind.

Have a look at the app’s use case diagram below. There’s one user role and two use cases: 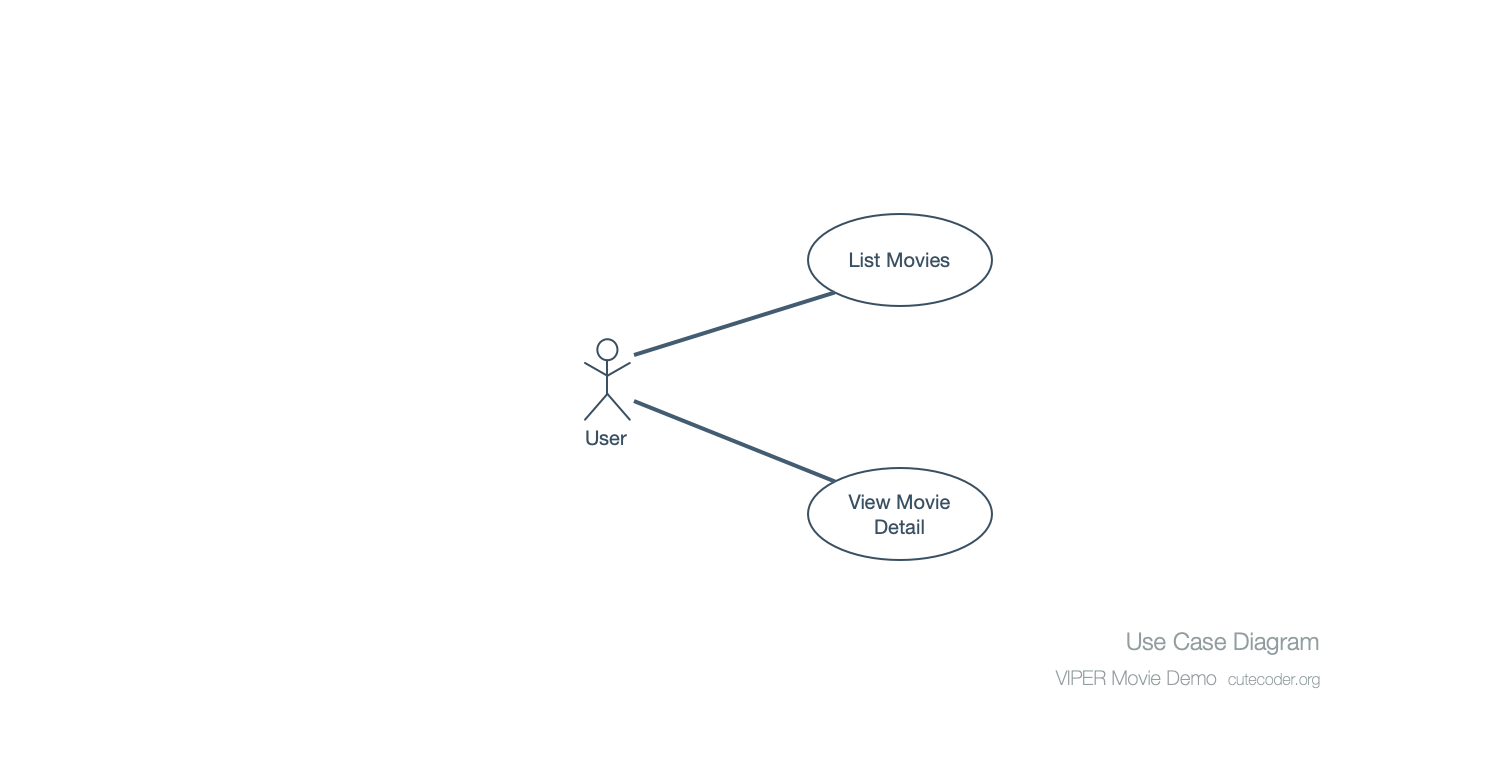 The app shows titles of popular movies released within the pass year. Selecting a movie title would show its detail. When you scroll down and reach the end of the list, the app responds by fetching more movies to watch – giving the impression of an infinite list. This list of movies comes from The Movie Database, which provides a web API to retrieve its data.

I concur that VIPER might be overkill for this app, having only two screens where an MVVM architecture would suffice. However even with only two screens, a router component would be useful for navigating between them. Nevertheless, Clean Architecture should help improve reuse when the app gets brought over to other platforms that supports Swift.

The app consists of modules conforming to Uncle Bob’s Clean Architecture. Each layer gets mapped as a static library which defines their respective module. Having layers as static libraries means there is no run-time overhead coming from dynamic linking normally associated with Swift frameworks. Moreover, defining modules enforces explicit import function when using code between modules and enables internal (module-level) access control. 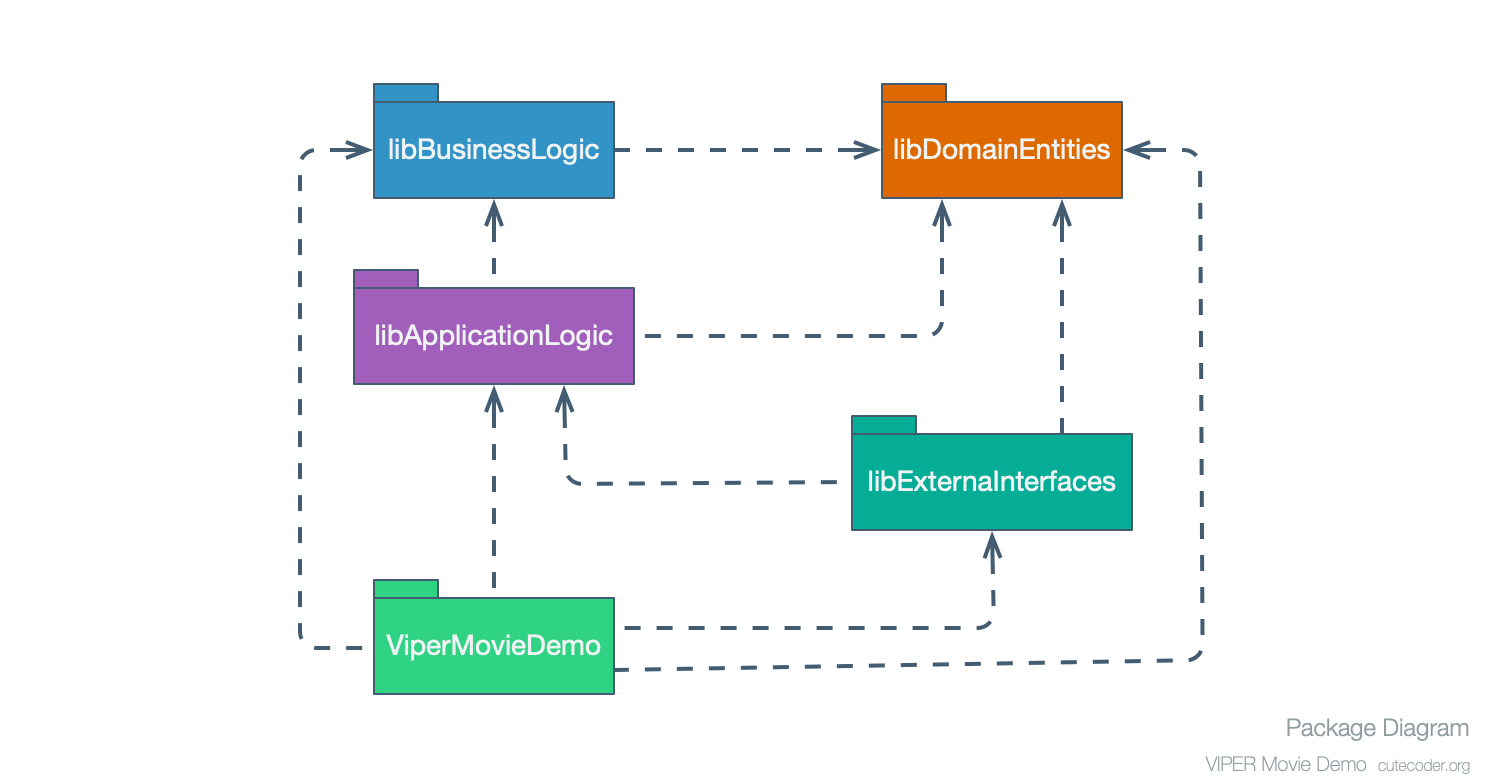 These are the modules of the app:

The source code is also organized that top-level folders maps to their respective layers and modules. In turn, the application logic layer is further sub-divided into class archetypes like view controllers, presenters, or wireframes. Most layers would have a source file named Interfaces.swift containing protocols and supporting types that are publicly accessible outside of it.

The following object diagram shows what objects are instantiated and how they inter-relate in the application when it is showing a movie detail. That is, when the user started the app and then select a movie to show its detail. 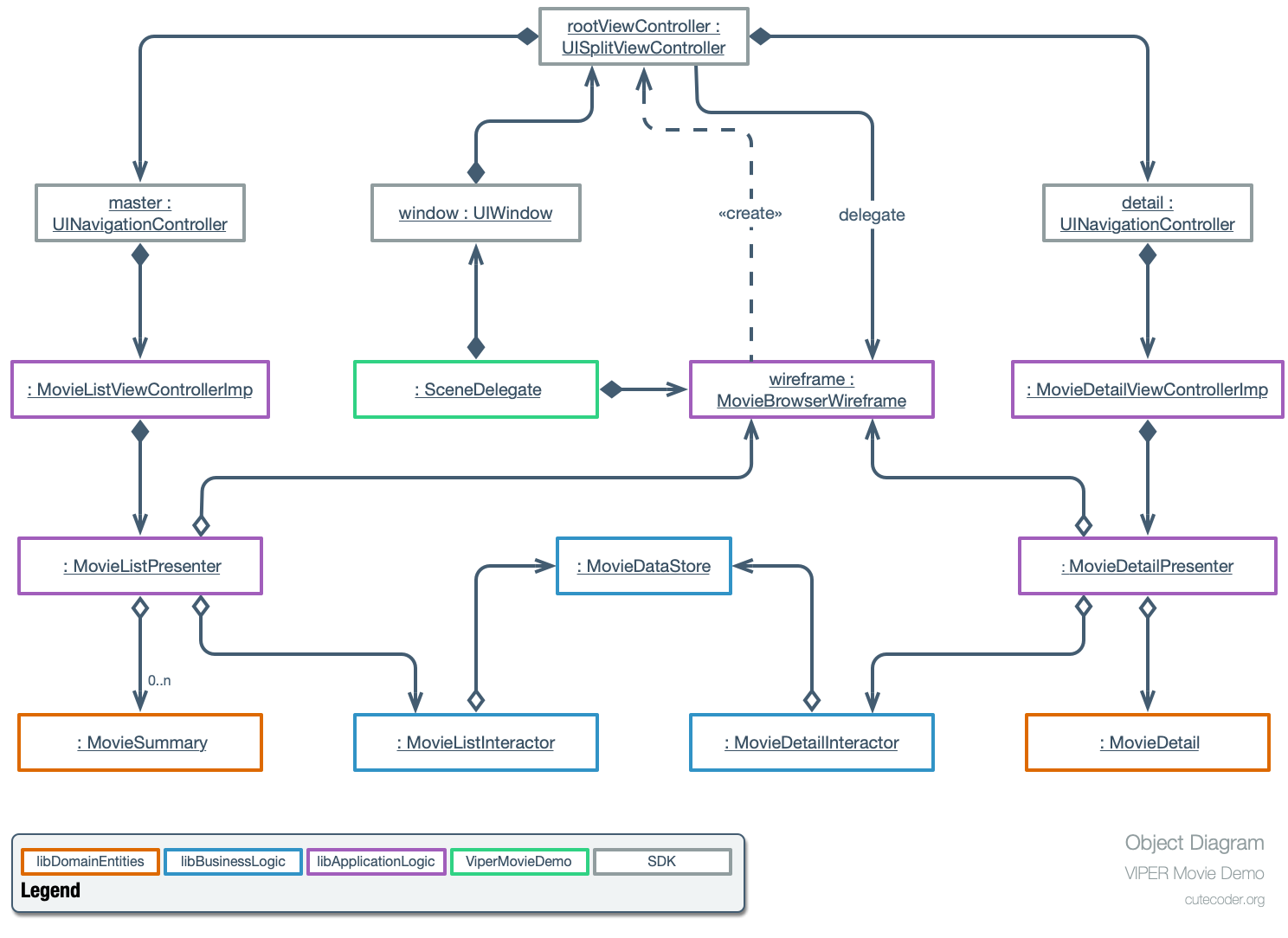 On navigation events, presenters would typically pass the wireframe with two objects:

In this example app, “what to present” is either a presenter object or an error object. Whereas the “where is it coming from” is the current UIViewController.

The following sequence diagram shows the order of events happening when the user selects an item to show its detail. You can see how views collaborate with its controllers and how presenters and the wireframe comes into play. 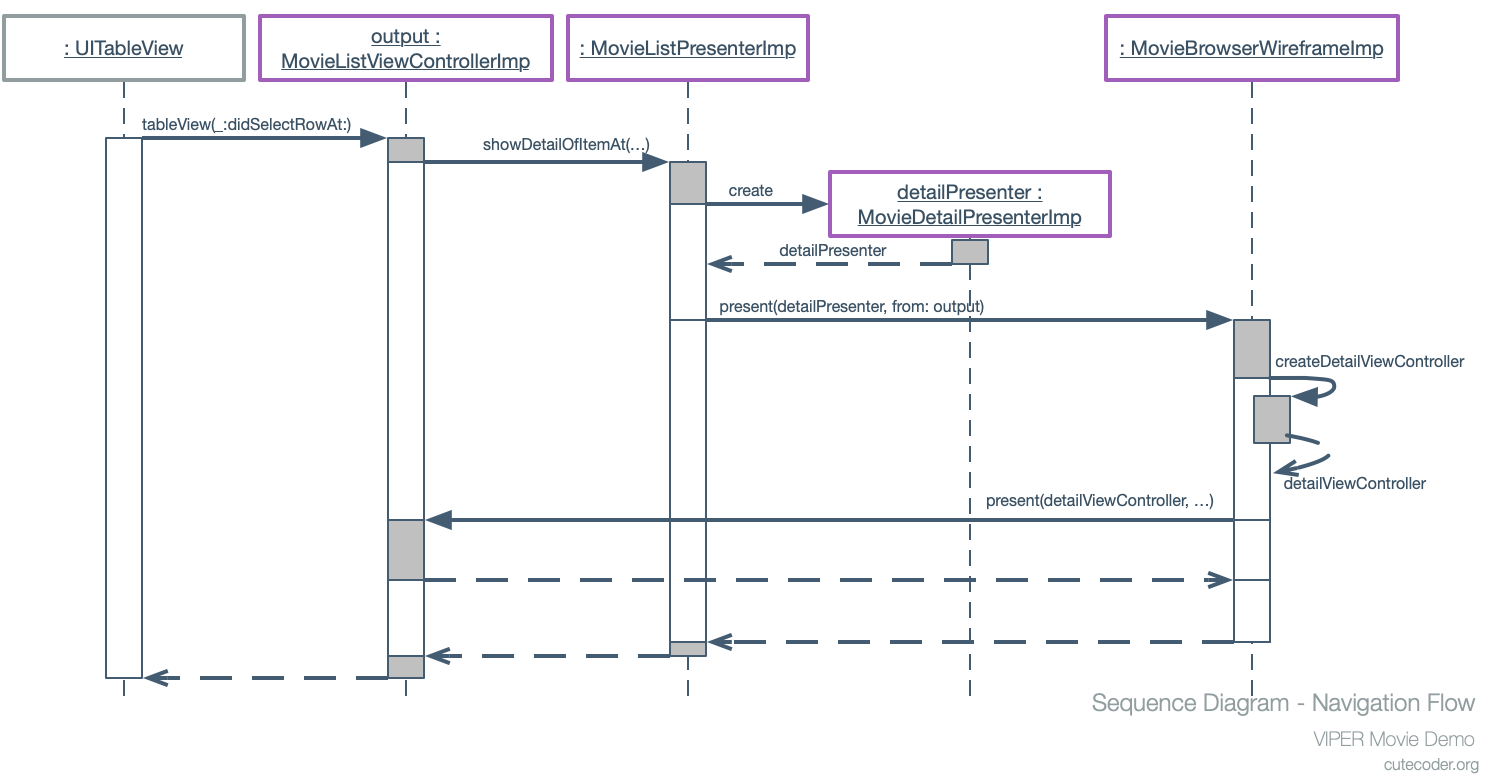 This section shows how classes in the application relates to each other. These class diagrams show how things are at compile time. In other words, these associations can be deduced from the source code without running it.

Since this is a movie browser app, the domain entities layer are mostly about movies. 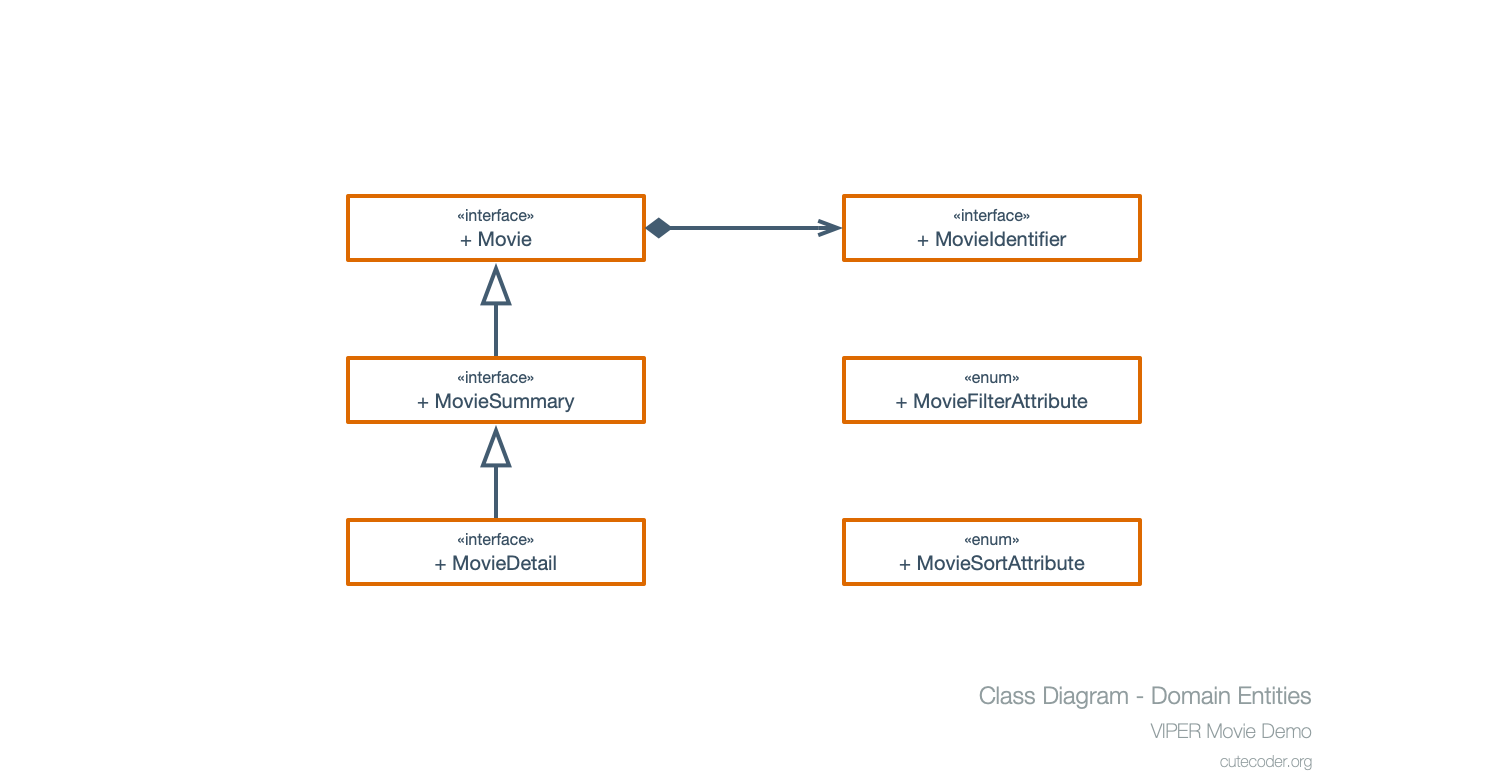 There are two interactor classes supporting the two use cases of the app:

MovieListInteractor returns paginated lists of MovieSummary objects. Being part of policy code, the interactor defines the sort and filter parameters for querying the list. However the page size (i.e. number of movie summaries shown per batch) is configured into the interactor, since this is dependent on how the user interface is structured. The class is also responsible for creating MovieDetailInteractor instances for interacting with a particular movie record.

In turn, MovieDetailInteractor produces MovieDetail objects containing details of a movie. Instances of this interactor are configured with a MovieIdentifier object upon creation, hence it would only return details for that particular movie record. 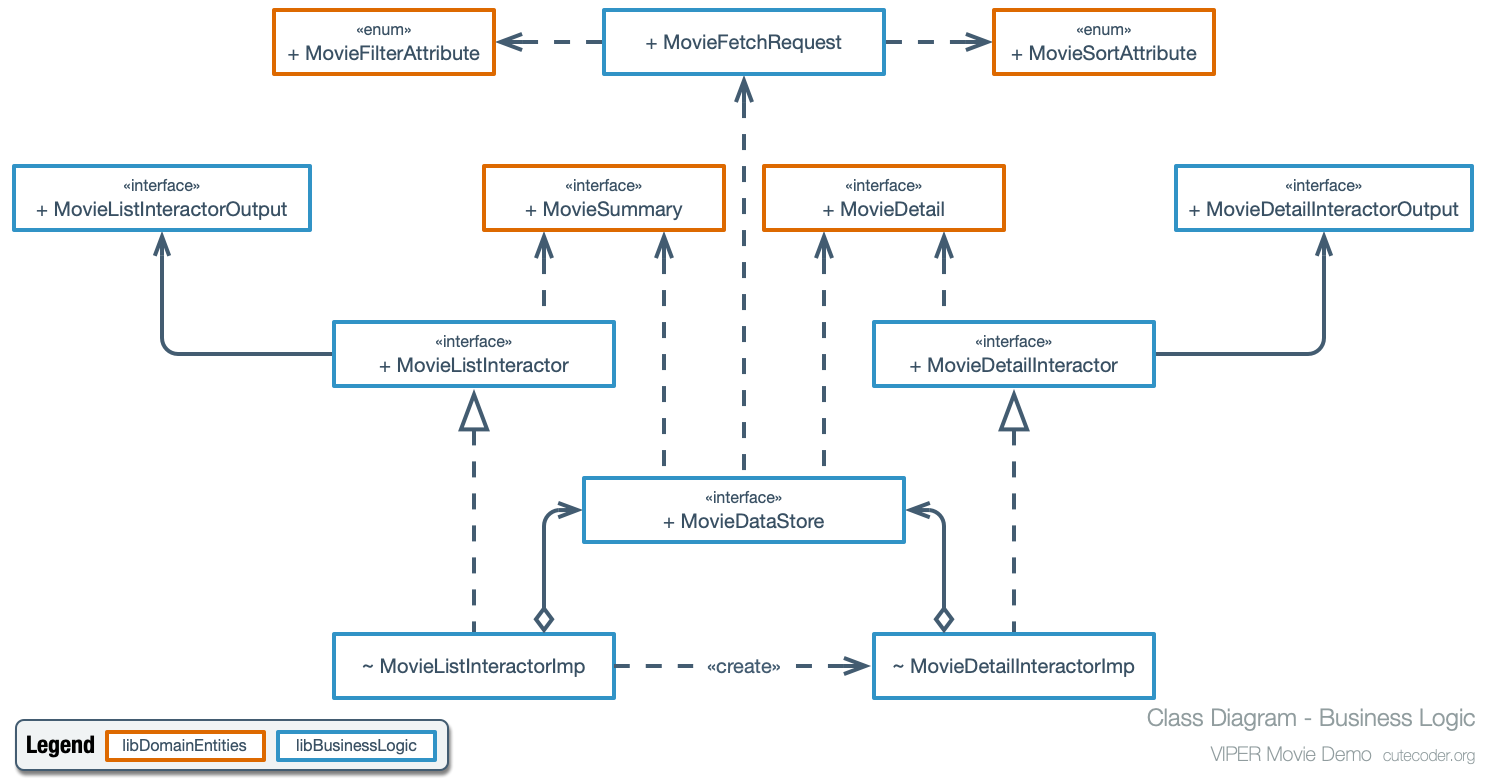 The two interactor objects typically connect to the same MovieDataStore instance. Again, this data store is expressed in the business logic code as a protocol to be implemented by an outer layer.

Lastly MovieFetchRequest defines how interactors would retrieve movie lists from the data store. This is a simple data transfer object implemented as a Swift struct without any logic.

Class MovieBrowserWireframeImp is the concrete implementation for the wireframe, hidden from outside of the module. Similarly, the view controllers and presenters concrete classes are also internal-access only. 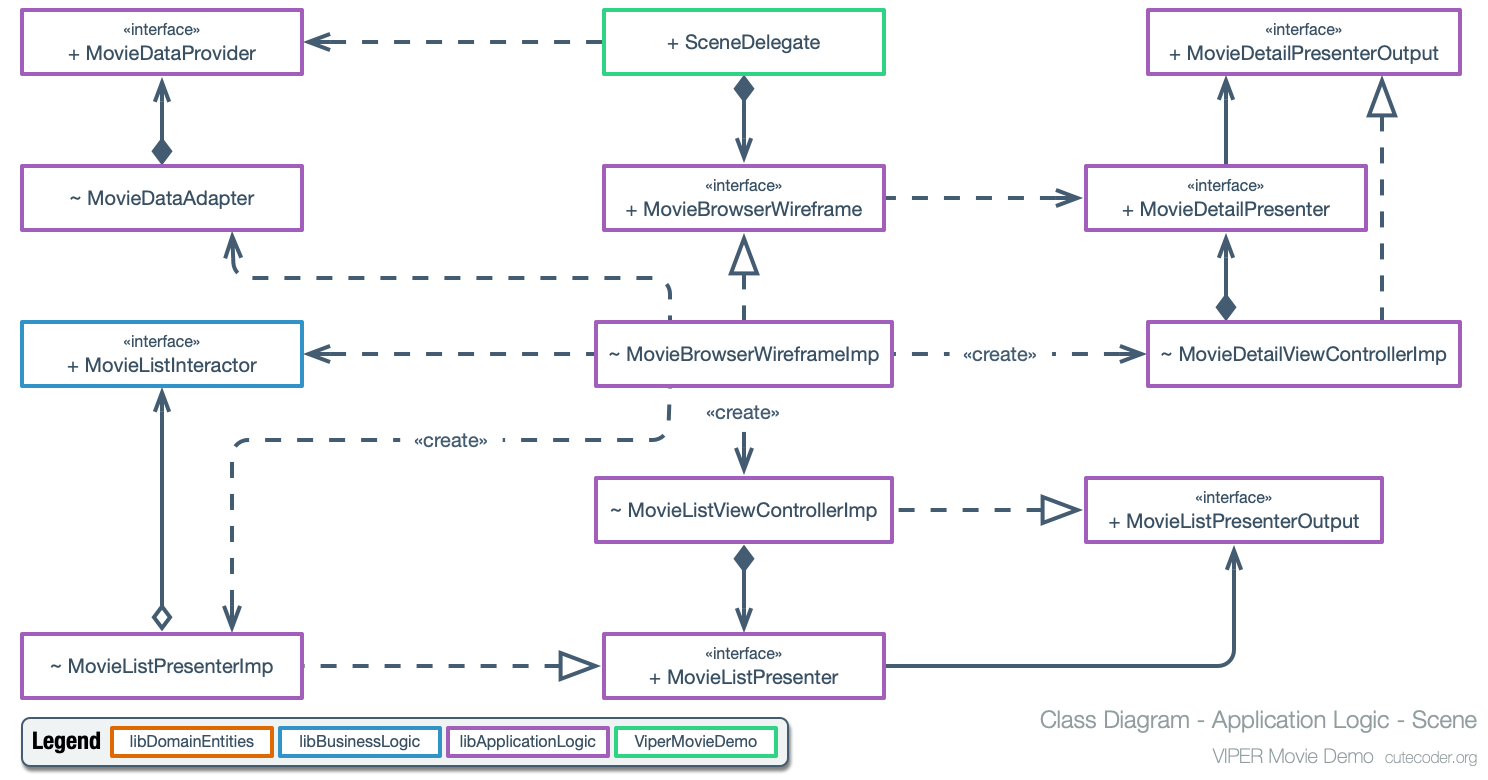 Besides setting up the view controllers, the wireframe also sets up the initial interactor instance (implementing MovieListInteractor) and hook it up with a data store. More on the data store stack later in this article.

The movie list is shown by class MovieListViewControllerImp. It is a UITableViewController subclass which shows the movie titles in a table view. It owns the table view, configures cells, and owns the presenter object. It also translates user actions into higher-level events handled by the presenter. Notably table view cell selection and scroll to the end of the list event. These gets translated to the presenter as show detail and load more data events respectively. 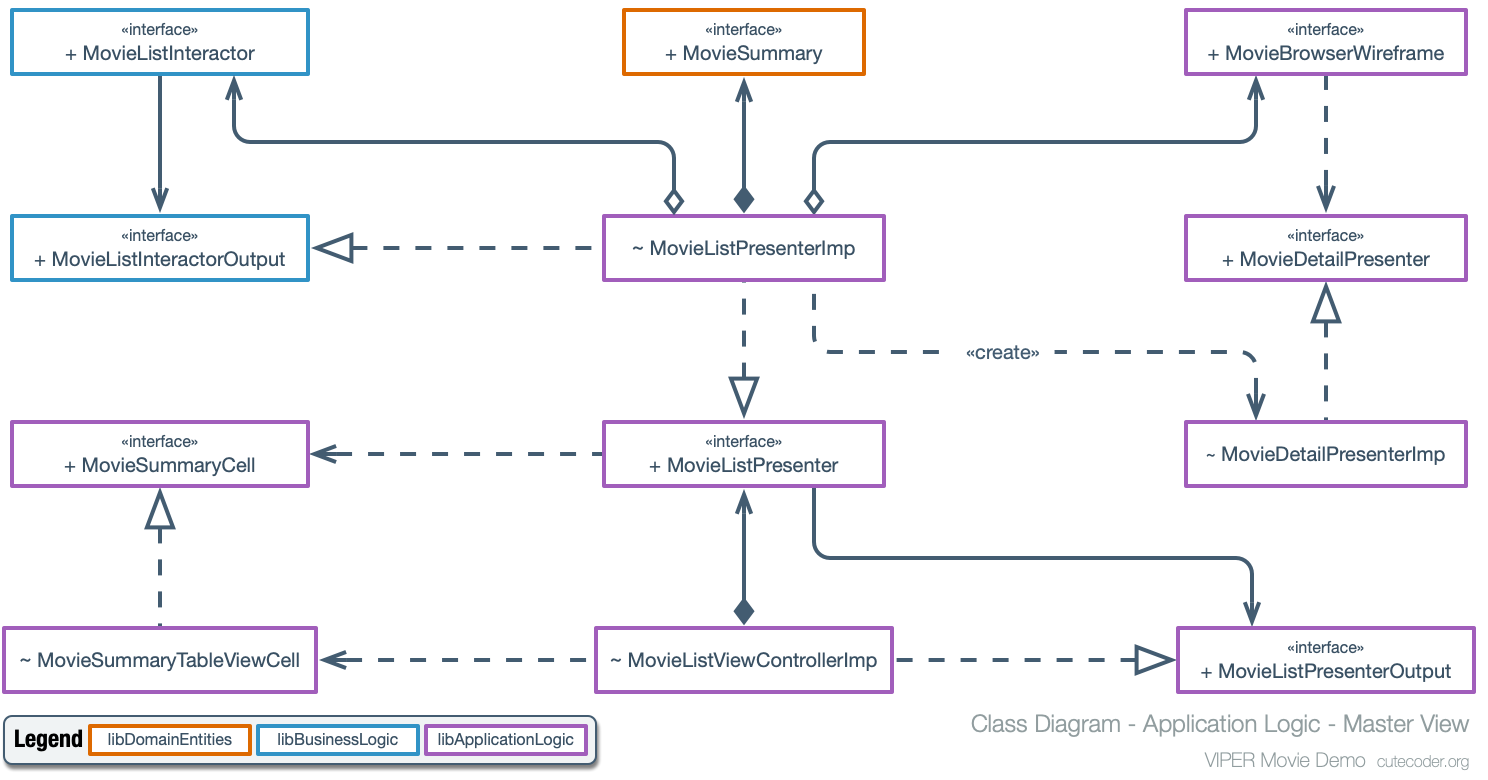 Class MovieListViewControllerImp implements MovieListPresenterOutput in order to receive notifications from its MovieListPresenter instance. This delegation setup enables the presenter to signal the availabilities of new data independent of user events – making cases such as silent push easier to implement without any change to the user interface.

Cells in the table view owned by MovieListViewControllerImp implements the MovieSummaryCell protocol. The presenter only knows this protocol and thus switching from a table view to collection view implementation of this display won’t affect the presenter at all.

In turn the presenter talks to an instance of MovieListInteractor, which houses the business logic of fetching the movie list. The presenter configures the interactor with the current date and the device’s preferred language. In turn the interactor uses these as input for filter criteria in which to fetch the list of movie from the data store.

The primary owner of a movie detail screen is class MovieDetailViewControllerImp. This is also a UITableView subclass but instead of presenting individual data items as cells, it presents attributes as rows of the table view. Its corresponding presenter is MovieDetailPresenter hence the class implements MovieDetailPresenterOutput to respond to movie refresh event. 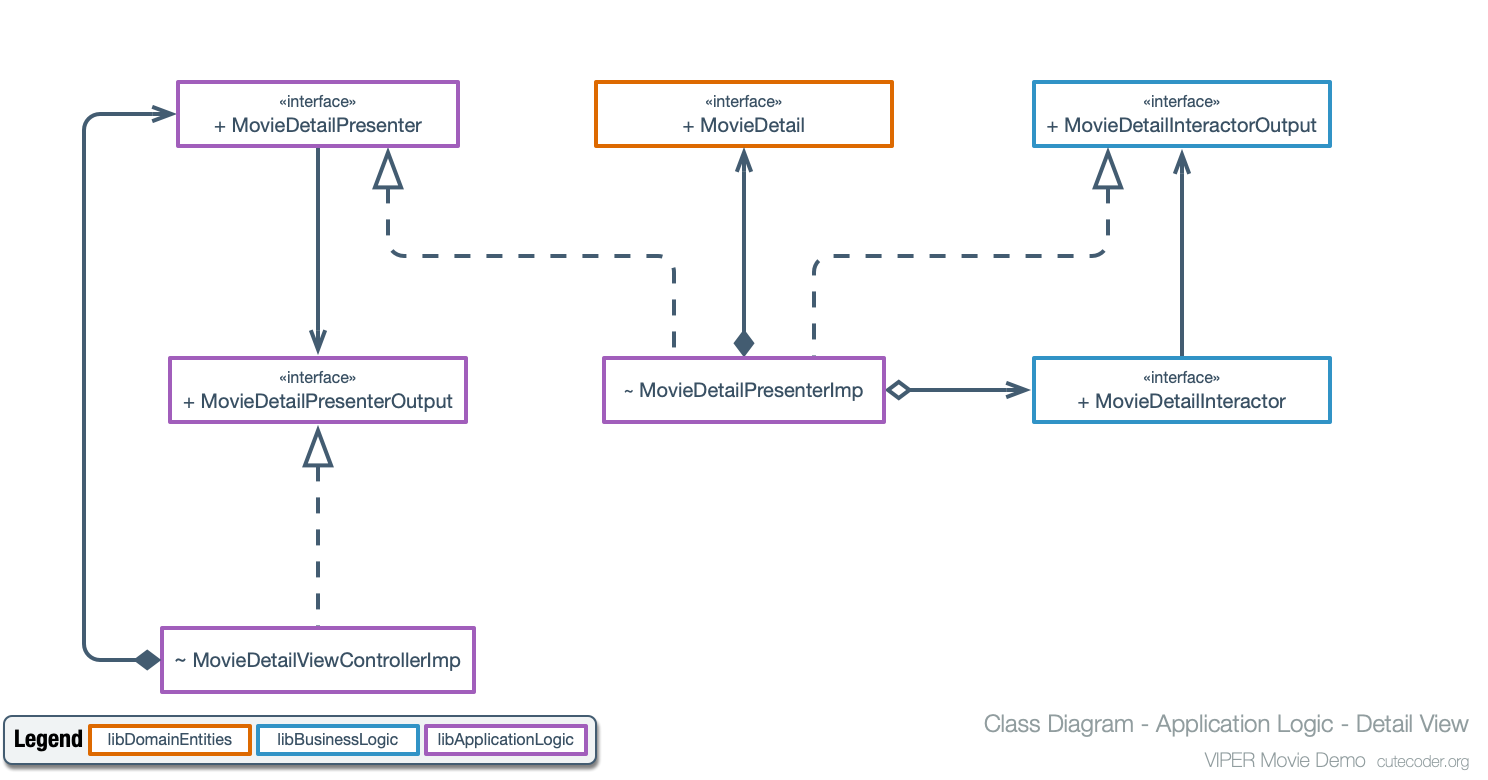 Having the presenter isolated from the view structure or even the view controller’s concrete type allows the movie detail screen to switch from a UITableViewController implementation without any impact to the presenter nor the business logic. For example, instead of displaying movie detail attributes as a table view cell, the view controller shows them it as a collection of text fields in a stack view.

This app’s data store is mainly a network client since its persistent store is located in The Movie DB’s servers. However the location of data at rest is well isolated from the rest of the application. Therefore if the data store changes into a local/remote hybrid or even a fully local store (like how an offline encyclopaedia app is structured), most parts of the application won’t get impacted. 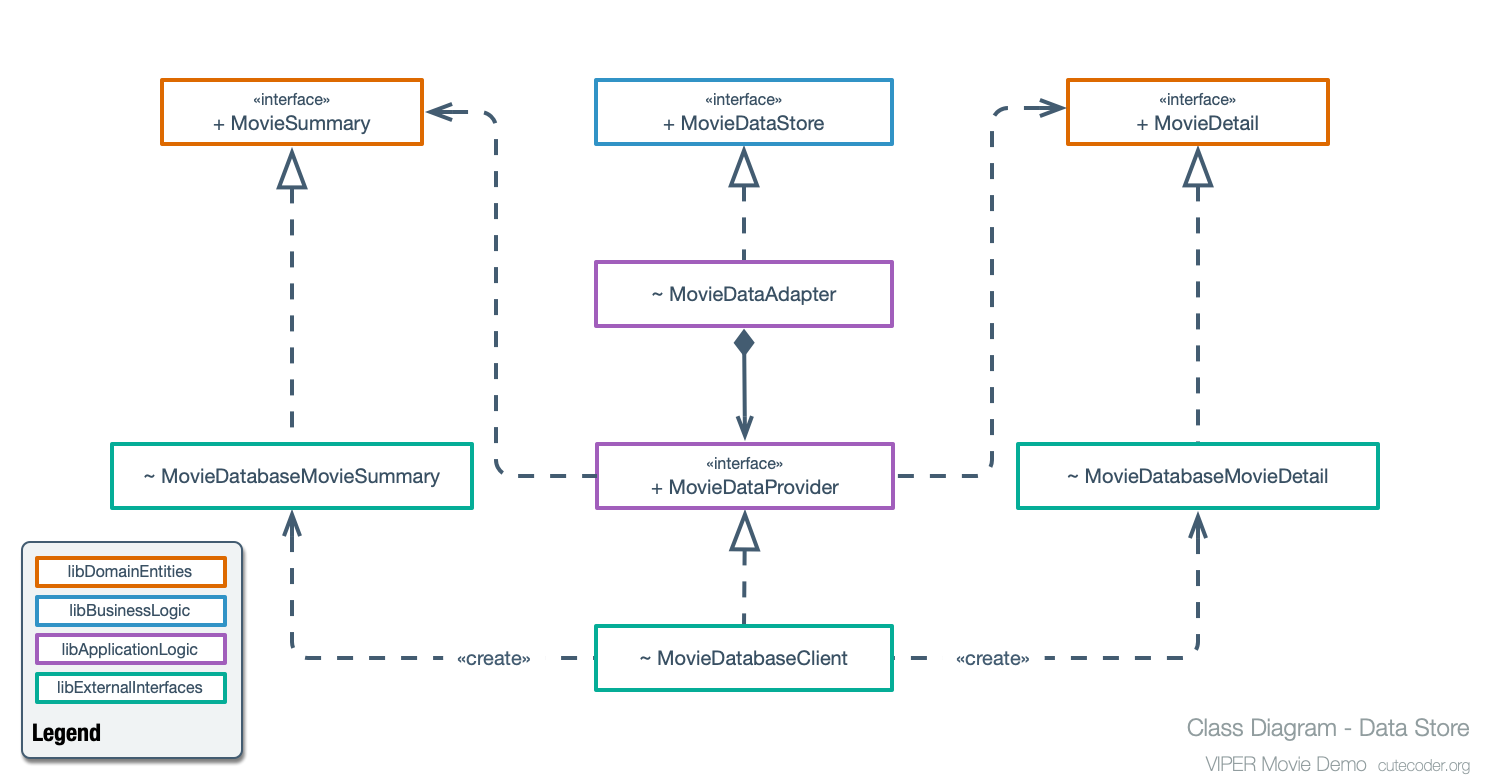 Class MovieDatabaseClient makes calls to The Movie DB’s network API via URLSession. The class also work with collaborators which parses JSON data returned from the API.

The network client and its helpers are placed in the outermost, most fragile layer. Should The Movie DB decides to change their API, these classes would be most affected. Hence these are part of the libExternalInterfaces library, which is our implementation of the outermost layer in Clean Architecture.

The Movie DB has a “page-based” API in which data rows are fetched in multiples of 20 items. However the app needs variable-length fetch batch size, depending on how many items that the master view can display. At the moment this depends on the height of the screen or window of the master list table view.

That’s where class MovieDataAdapter comes in. It implements MovieDataStore protocol defined by the Business Logic layer and exposes variable-length fetching. In turn, it uses an instance of MovieDataSource which uses page-based fetching. The adapter translates between variable-length batches coming in from interactor objects into one or more calls of fixed-length pages to MovieDataSource – making multiple calls to the data source if the batch size is larger than the page size.

However since the MovieDataAdapter class is part of the Application Logic layer, it doesn’t make any network I/O – no references to URLSession or other networking classes. The role of networking is reserved for the “external interfaces” layer in this project.

Let’s revisit the layer dependencies of our implementation of Clean Architecture. The diagram shown below is essentially the same package diagram shown earlier in the article, but expanded with examples of each package’s prominent members. 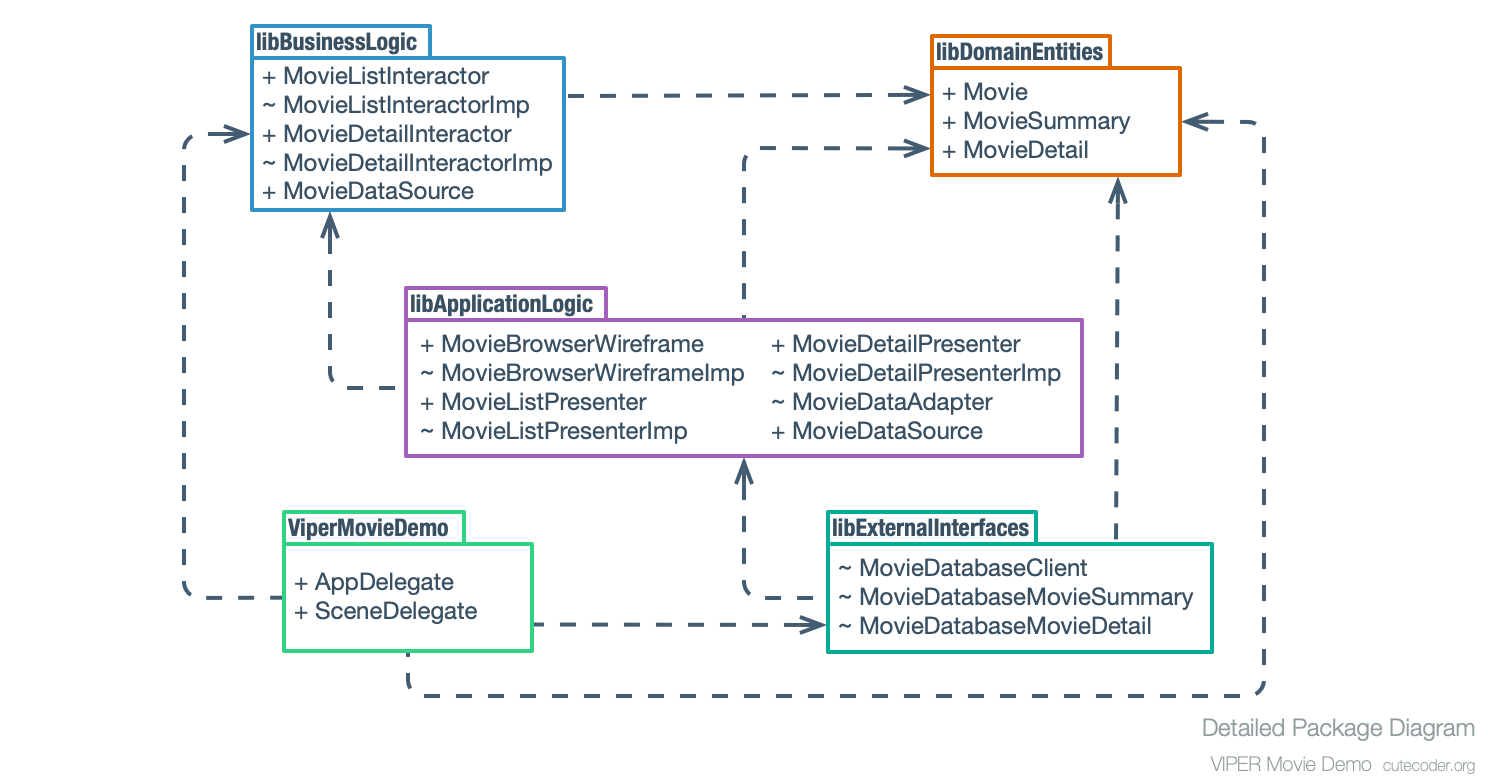 You can see that Clean Architecture is really an architecture for a hierarchy of plugins. Here, outer layers “plugs in” to inner layers by implementing an interface defined by the latter. In turn the pieces gets “assembled” at run-time through dependency injection.

The source code is available on my Github repo, licensed as Apache 2.0 open source. Please link to this article when you expand the project or create derived works from it.

Now that you’ve see a full implementation of VIPER and Clean Architecture, it’s time that you apply the knowledge. One way to start is to “maintain” this sample application and expand its scope. That is, pretend that you’re just hired to improve this ViperMovieDemo application and need to continue developing it.

Here are some ideas to start applying your knowledge and improve the application.

Remember to keep in mind of the Clean Architecture Principles when adding features and extending the app’s supported platforms:

That’s all for now. Take care.

0 thoughts on “Clean Architecture with VIPER Sample Project for UIKit”