How to Get Core ML Produce Images as Output

Core ML’s tools to convert other framework’s machine learning models is a pretty awesome feat in itself. However it is by no means complete. I found some issues in converting models which outputs images. Issues which took me a few weeks to solve even after many consultations to Google and Apple’s own forums. But here’s the solution and I’m sharing it with you so that you don’t have to experience the same predicament which I had.

As I was working on my image processing application with heavy machine-learning content, I’ve discovered some issues when trying to convert my machine learning models from Keras into Core ML so that I can run the model in my iOS app.  The conversion tools provided by Apple has decent support for machine-learning models with images as input.  However for models that produce images as output, support is a bit lacking.

Specifically the Keras model converter delivered as part of coremltools version 2.1 can’t seem to create Core ML models that output images even when support for images as input is pretty good.  You can take a Keras model taking a nm3 tensor as input and then convert it in such a way that the resulting Core ML model would take in a CVPixelBuffer instance as input. There are options that you can use to specify a normalization factor, per-channel bias, even whether the model expects RGB or BGR images as input.  However there’s practically no equivalent support for the output end of the model.  There’s no easy way to configure the converter to create a Core ML model that outputs a CVPixelBuffer instance hence ready for use by other iOS or macOS system functions. 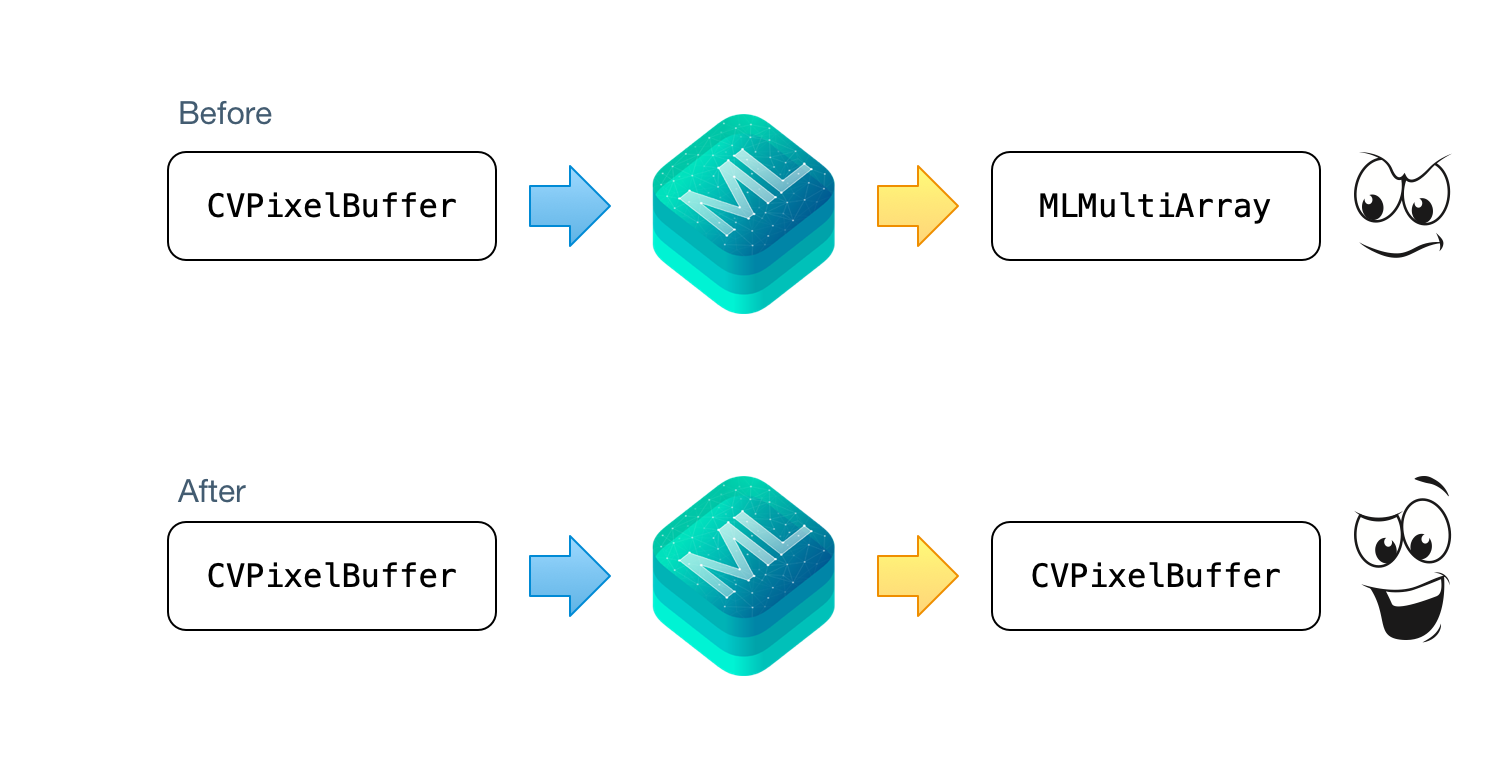 The documentation on this isn’t so clear either. Browsing Apple’s forums only yield a partial answer.  Fortunately after many hours asking Google, traversing into Apple’s own developer forums, and some independent poking around, I’ve finally found a solution.  Now you don’t need to go through the same predicament that I went through.  Interested? Read on.

Most machine-learning models that processes bitmap images expect pixels as floating-point values ranging between 0..1 inclusively.  This likely stems from the nature of many machine-learning primitives which works best on small-valued numbers — take the sigmoid function, as an example.  On top of that, since these algorithms usually work with 32-bit floating-point values, having values small meaning there are more bits available for storing numbers to the right of the decimal point — in other words, more precision. This also seem to resonate well with functions that are more responsive when with inputs close to zero.

However the more common formats for bitmap images are the ones having color values as integers.  Typically each pixel is a triplet of integers, each ranging 0..255 inclusively, and each integer represents the red, green, and blue color channel.  The Keras converter has options to convert RGB images of 8-bit channels into the floating point channels that many machine-learning models expect as input, including converting the 0..255 range of integers into 0..1 floating-point values. However there’s no such option when you want the output to be integer tensors ranging 0..255.

You can post-process the output tensor yourself and convert it into an image.  Just beware that naive post-processing may not be optimal.  If you iterate through every element in the MLMultiArray instance and extract each channel value of each pixel trough the subscript operator be aware of these overheads:

Moreover converting each pixel value this way means that you are not taking advantage of acceleration by the GPU or even the vector processor. But optimizing this conversion yourself often means that you are duplicating the some of the work that Core ML is already doing.  Fortunately there is a way to get Core ML do this post-processing such that you can do away with MLMultiArray altogether and get a ready-to-use CVPixelBuffer instead.

To create a Core ML model that outputs an image, you would need to perform some surgery to the model after the conversion process.  First you convert your machine-learning model from whatever format that you originally train it on into the Core ML format.  Then you use the coremltools Python library to add a post-processing layer on top of your original model’s output layer. Then save the result into another Core ML model ready for use in your Xcode project.

The following is an overview of the surgery procedure.  I recommend you do this surgery in the Jupyter Notebook environment so that you can “go slow” and check the result of each command.

Use the coremltools library to load the model into the Python environment.  A Core ML model file is in the protocol buffer format and probably you can edit it using other protobuf tools. But it is easier if you just use the tools that Apple provides.

Furthermore an MLModel object isn’t meant for modification.  To change the model, you would need to access the spec attribute and mutate that instead. Then when you’re done, you create another MLModel object from the modified spec object and save that new object into a file.

Marking the Output Layer as an Image

Then you would need to let Core ML model know that your new output layer represents an image.  To do this, use the convert_multiarray_output_to_image on the new layer.  I’ve found this function in Apple’s discussion forum posted by an Apple staff — not sure why it is not integrated into Core ML.  Nevertheless, the function is not a complete solution without additional the linear activation output layer described earlier.

Having a new layer, you would need to save it into a new model file.  To do this, create a new MLModel object using the spec object you’ve been working on and then save that object into a file.

To make sure that your surgery is correct, take a sample from the original training set used to train the model and then use the updated Core ML model to perform prediction.  If all goes well, the prediction result should roughly match the truth value that you have in the training data.  Remember that at this point you are not testing the model’s quality but instead making sure that the surgery went well as expected.  Hence that’s why I recommend to use some samples from the training set.

Hopefully this is useful for you.  It took me a few weeks to figure this out – time that you don’t have to spend yourself.  In any case, I do feel that coremltools should have this feature built-in without all of this manual surgery. But then again, there could be other options or corner cases that I haven’t considered.

Thats all for now. Until next time

My latest guest post for Waldo shows you how to use SQLite databases using Swift through Gus Muller’s FMDB library.   Head to Waldo for the article: Getting Started with FMDB and Swift: A Guide.   Avoid Delays and Rejections when Submitting Your App to The Store! Follow my FREE cheat sheets to design, develop,…
END_OF_DOCUMENT_TOKEN_TO_BE_REPLACED

Comparing SwiftUI with storyboards for iOS development - which one is better when.
END_OF_DOCUMENT_TOKEN_TO_BE_REPLACED

Check out my latest guest post at Waldo: How to Create an iOS App ID: 2 Quick and Easy Methods. You will learn: What an App ID is in Apple’s ecosystems. How to create App IDs. What is an App Store ID and how it relates to an App ID. How to find an App…
END_OF_DOCUMENT_TOKEN_TO_BE_REPLACED

By default, Xcode Server signs binaries using a development certificate, not a distribution one. Unfortunately there is no built-in option to make it use a Developer ID certificate. What's the solution?
END_OF_DOCUMENT_TOKEN_TO_BE_REPLACED

Notarization is a fully automated process, unlike going through the App Store which involves manual human review. At least it's automated in Apple's side. However it could consume a non-negligible amount of brain bandwidth in your side. How about automating it?
END_OF_DOCUMENT_TOKEN_TO_BE_REPLACED

Continuous testing is paramount to ship serous software. Yet continuously running tests is a pensive productivity plight. Is it possible to automate testing? Yes you can.
END_OF_DOCUMENT_TOKEN_TO_BE_REPLACED

Xcode 13 brought a new notarization tool. What is it and how much better compared to the old one?
END_OF_DOCUMENT_TOKEN_TO_BE_REPLACED

“I want a REST API for notarization since it’s impossible to parse text coming from the notarization tool reliably.” What if I say that the command line API is the best method for integration with build pipelines? Read on to find out more.
END_OF_DOCUMENT_TOKEN_TO_BE_REPLACED

Notarization may take just a few clicks in Xcode, but this takes time and a security risk. You include notarization as part of your continuous delivery pipeline. Here's how.
END_OF_DOCUMENT_TOKEN_TO_BE_REPLACED

Distributing binaries for macOS outside the App Store requires registering it with Apple beforehand—notarizing it. But do you know what can be submitted for notarization?
END_OF_DOCUMENT_TOKEN_TO_BE_REPLACED

A popular image processing library has a vulnerability that can cause denial of service by a maliciously-crafted file causing the application to consume too much memory. Should you upgrade or is there another solution?
END_OF_DOCUMENT_TOKEN_TO_BE_REPLACED

The App Store Small Business Program offers lowered commission cost with one big caveat: no app transfer. But apps graduating from a "hobby" into a "small business" would definitely involve transferring ownership. Read how to transfer apps without engaging in the app transfer process and losing out on the program's benefits.
END_OF_DOCUMENT_TOKEN_TO_BE_REPLACED

Compiled code can conclude the instruction set through conditional compilation. But what about processor-independent scripts? Finding out the current native processor architecture and emulation status thereof would be very useful in build systems that doesn't support cross-compilations. Find out how a shell script can find out whether it is running under Apple's processor, Intel, or emulated.
END_OF_DOCUMENT_TOKEN_TO_BE_REPLACED

Being in the "bleeding edge" has its drawbacks in addition to benefits. Blazing a fresh trail means it's more rough and plenty of unknowns. Similarly in open source software, support for the ARM architecture is slim and even slimmer on the Mac. But there is a way to run "legacy" Intel-only command line apps on the Mac.
END_OF_DOCUMENT_TOKEN_TO_BE_REPLACED

Distributing macOS apps as ZIP archives has been quaint since Sierra. Today’s macOS packaging requirements mandates notarization, otherwise it would say that your app is suspicious. This often means distributing apps within disk images since this container format can be signed, notarized, and stapled.
END_OF_DOCUMENT_TOKEN_TO_BE_REPLACED

Publishing similar apps is considered spamming. Yet there are valid reasons to develop multiple apps from the same code base. Here is what you need to know to avoid being labeled as spammer by app reviewers.
END_OF_DOCUMENT_TOKEN_TO_BE_REPLACED

Some developers' app updates were rejected from the App Store because their apps look similar. Worse, some others were marked as spammer due to publishing apps that looks like another developer's app. How can you avoid this?
END_OF_DOCUMENT_TOKEN_TO_BE_REPLACED