Fundsupermart being killed by investment advisors?

The Monetary Authority of Singapore requires investors to either become “knowledgeable” or hire an investment advisor to do their investing. Is this truly to protect investor or there is a conspiracy behind this?

Recently I received an e-mail from Fundsupermart (one of the investment brokers that I use) essentially saying that I can no longer use their services since I am not a finance professional. They say that this is a new regulation from the Singapore government (to be exact, from the Monetary Authority of Singapore – MAS). My initial reaction was “Shit, should I sell out? I’m still at 20% loss from 2008’s financial crisis”. But then again they wrote that they will provide more information later — whatever that means. At least there isn’t any immediate action needed from me. 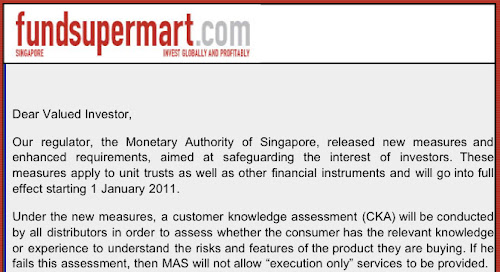 Between the lines, it looks like the MAS regulation urges investors to go to investment advisors (IAs) instead of making decisions to buy funds themselves. An IA is supposed to recommend mutual funds (unit trusts) based on the investor’s risk profile. But really an IA is nothing but a glorified salesperson since they take commissions from the funds that they recommend. But really, it’s the fund managers that are supposed to be at the investor’s best interests — if I’m already very good at stock trading, I will simply manage my investments myself and not buy mutual funds.

This is crap. If IAs already made their money when the fund is sold, they won’t care how it performs in the long run. Unlike fund managers who at least should take care of the fund during their tenure. Anybody who have done any business know that salespeople doesn’t really care what happens after they made the deal and get their cut.

Then again, the Association of Investment Advisors or some really powerful unit trust salespeople could be behind this. They lobbied MAS to enact this regulation and say that the regulation is meant to protect average investors but really they are just trying to get more business. Recent financial crises (2008 and 2011) have been tough for anybody who are selling investment products. People are just keeping cash (me included) or buying gold. So it make sense to suspect IAs who lobbied for this regulation to get more business and make it look as if they are helping the general public.

0 thoughts on “Fundsupermart being killed by investment advisors?”