Git Client to Manage Remote Repositories on an iPad?

An iPad is the mobile computer of choice for casual computing. How about making quick fixes or other tasks to your git repository? Sure you can do that from an iPad – if using git on the command line is your thing. GUI lovers doesn’t have this luxury. Yet.

In my dayjob we have these big (tens of gigabytes each) git repositories that houses the company’s flagship product. Mostly they contain C++ source files and some XML files for generating other source files. Also there are some Java sources and various scripting-language files. In any case the majority of the population are text source files. We keep binaries such as image and sound files in their own (separate) git repositories, which are also large.

Because of their size, building these projects also requires immense system resources. We have a number of custom-made scripts that are part of a distributed build system to compile and link these source files on the server and make use of the computing power of other servers in the data center.

We keep these git repositories on the repo/build Linux servers. Locally cloning the repositories to our workstations aren’t much workable since it needs a case-sensitive file system and the files need to be on the server to be compiled. Not to mention that we couldn’t frequently commit source files due to how code reviews are being done – but that’s another story fit for an entire post in itself.

Editing the source files are done by rsync-ing our working set back and forth between our workstations and the repo/build servers. We also have a custom IDE (based on Eclipse) that handles this rsync-ing. Some are contempt to use vim and edit the source files directly on the server itself.

My biggest pet peeve of this setup is with our source control system – which is git. Simple tasks that are easily done using a GUI application like SourceTree or Git Tower becomes a chore because we couldn’t access file repository locally. Activities like committing parts of a file, determining a file’s changes through different revisions, and resolving merge conflicts is a huge PITA when the command-line is the only way you can do it.What makes things worse is that just about every Git GUI applications need the entire repository to be accessible locally and not much usable if you can’t clone the entire repo to your computer.

Our custom Eclipse-based IDE does help with git somewhat, but not much. It can only add edited files to git’s staging area on the server but not much else. There is no support for rebasing, squashing commits, pulling changes from other branches, and that kind of intermediate-level source control tasks. Those can only be done via the terminal using the git executable located on the server.

I’ve been toying with the idea of a GUI “shell” app that connects to the server via ssh and runs the git command line program remotely on it. Thus the repository can remain on the server and the app’s purpose is to save you from remembering many of git’s arcane commands and give you a nice-looking view of your repository. 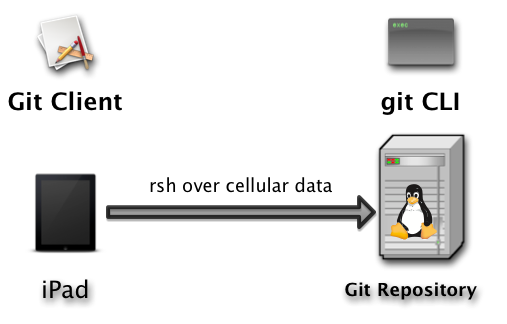 This shell application would fit nicely as an iPad app, mostly to be used “on-the-go”. There are four reasons why:

Why not a desktop app? If this is made into a desktop app, it would compete directly with other git apps already present on the desktop – many of them free. Since this venture isn’t funded by a large company like Atlassian (for which SourceTree is), I need to make up for the time I’ll be spending to develop and support it. (Better yet if I can retire on it and move back to Indonesia – of course, that’s my wishful thinking).

What This Means To You

If you share a similar pain point as I do, speak up!  Let me know if this is a problem worth solving and I’ll certainly solve it. Yeah, it’ll be a paid app, but it’s not going to be expensive (promise!). How much? I’m thinking around the areas of $40 or so.  That’s still cheaper than Git Tower and probably I’ll start at a much lower price in early revisions and steadily approach that target price as I fix bugs and add features to the app.

Let me know what you think in the comments below. Remember: your feedback will be the more reason that this problem is worth solving and will motivate me more to make this app. No feedback, no app!

5 thoughts on “Git Client to Manage Remote Repositories on an iPad?”

My latest guest post for Waldo shows you how to use SQLite databases using Swift through Gus Muller’s FMDB library.   Head to Waldo for the article: Getting Started with FMDB and Swift: A Guide.   Avoid Delays and Rejections when Submitting Your App to The Store! Follow my FREE cheat sheets to design, develop,…
END_OF_DOCUMENT_TOKEN_TO_BE_REPLACED

Comparing SwiftUI with storyboards for iOS development - which one is better when.
END_OF_DOCUMENT_TOKEN_TO_BE_REPLACED

Check out my latest guest post at Waldo: How to Create an iOS App ID: 2 Quick and Easy Methods. You will learn: What an App ID is in Apple’s ecosystems. How to create App IDs. What is an App Store ID and how it relates to an App ID. How to find an App…
END_OF_DOCUMENT_TOKEN_TO_BE_REPLACED

By default, Xcode Server signs binaries using a development certificate, not a distribution one. Unfortunately there is no built-in option to make it use a Developer ID certificate. What's the solution?
END_OF_DOCUMENT_TOKEN_TO_BE_REPLACED

Notarization is a fully automated process, unlike going through the App Store which involves manual human review. At least it's automated in Apple's side. However it could consume a non-negligible amount of brain bandwidth in your side. How about automating it?
END_OF_DOCUMENT_TOKEN_TO_BE_REPLACED

Continuous testing is paramount to ship serous software. Yet continuously running tests is a pensive productivity plight. Is it possible to automate testing? Yes you can.
END_OF_DOCUMENT_TOKEN_TO_BE_REPLACED

Xcode 13 brought a new notarization tool. What is it and how much better compared to the old one?
END_OF_DOCUMENT_TOKEN_TO_BE_REPLACED

“I want a REST API for notarization since it’s impossible to parse text coming from the notarization tool reliably.” What if I say that the command line API is the best method for integration with build pipelines? Read on to find out more.
END_OF_DOCUMENT_TOKEN_TO_BE_REPLACED

Notarization may take just a few clicks in Xcode, but this takes time and a security risk. You include notarization as part of your continuous delivery pipeline. Here's how.
END_OF_DOCUMENT_TOKEN_TO_BE_REPLACED

Distributing binaries for macOS outside the App Store requires registering it with Apple beforehand—notarizing it. But do you know what can be submitted for notarization?
END_OF_DOCUMENT_TOKEN_TO_BE_REPLACED

A popular image processing library has a vulnerability that can cause denial of service by a maliciously-crafted file causing the application to consume too much memory. Should you upgrade or is there another solution?
END_OF_DOCUMENT_TOKEN_TO_BE_REPLACED

The App Store Small Business Program offers lowered commission cost with one big caveat: no app transfer. But apps graduating from a "hobby" into a "small business" would definitely involve transferring ownership. Read how to transfer apps without engaging in the app transfer process and losing out on the program's benefits.
END_OF_DOCUMENT_TOKEN_TO_BE_REPLACED

Compiled code can conclude the instruction set through conditional compilation. But what about processor-independent scripts? Finding out the current native processor architecture and emulation status thereof would be very useful in build systems that doesn't support cross-compilations. Find out how a shell script can find out whether it is running under Apple's processor, Intel, or emulated.
END_OF_DOCUMENT_TOKEN_TO_BE_REPLACED

Being in the "bleeding edge" has its drawbacks in addition to benefits. Blazing a fresh trail means it's more rough and plenty of unknowns. Similarly in open source software, support for the ARM architecture is slim and even slimmer on the Mac. But there is a way to run "legacy" Intel-only command line apps on the Mac.
END_OF_DOCUMENT_TOKEN_TO_BE_REPLACED

Distributing macOS apps as ZIP archives has been quaint since Sierra. Today’s macOS packaging requirements mandates notarization, otherwise it would say that your app is suspicious. This often means distributing apps within disk images since this container format can be signed, notarized, and stapled.
END_OF_DOCUMENT_TOKEN_TO_BE_REPLACED

Publishing similar apps is considered spamming. Yet there are valid reasons to develop multiple apps from the same code base. Here is what you need to know to avoid being labeled as spammer by app reviewers.
END_OF_DOCUMENT_TOKEN_TO_BE_REPLACED

Some developers' app updates were rejected from the App Store because their apps look similar. Worse, some others were marked as spammer due to publishing apps that looks like another developer's app. How can you avoid this?
END_OF_DOCUMENT_TOKEN_TO_BE_REPLACED