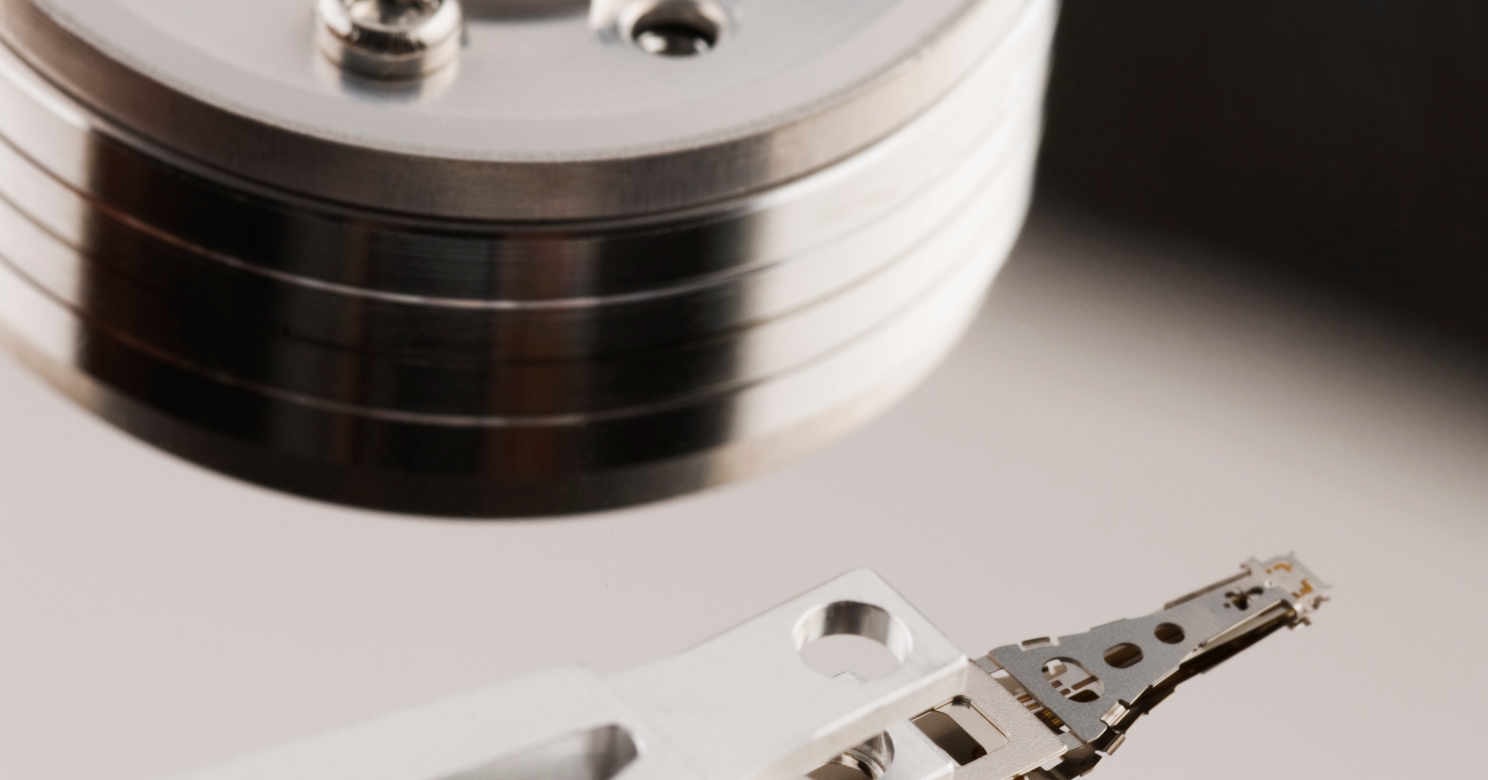 Do you distribute your macOS apps as .zip files? That has been quaint since Sierra. You should package your apps as signed and notarized disk images instead. Otherwise Catalina would say that your package is suspicious. However creating disk images is a rather involved process. Read on to find out more.

Distributing macOS apps within .zip files nowadays is no longer a good idea. One issue is app translocation. Another issue is the mandatory notarization starting from macOS 10.15 Catalina.

App translocation goes into effect when the user downloads a .zip file containing an application, extracts it, and runs it directly without moving it anywhere using the Finder. The operating system would run your app from a temporary read-only disk image created just for the purpose of launching your app. This has an unfortunate side effect of Sparkle being unable to update your app – which prevents you from delivering updates and bug fixes seamlessly to your user.

Notarization is the method to register your software packages to Apple when you distribute outside the App Store. The problem with packaging software inside a .zip file comes from the inability to attach the notarization result on to the archive. Therefore your user’s system would need to be online to check whether your software package has been notarized. Otherwise it would prompt a “macOS can not validate…” warning to the user, possibly causing suspicion to your package. However when the notarization result is stapled to your package, macOS can validate it without making a network connection to Apple.

Thus disk images is probably the best way to distribute application bundles outside the Mac App Store. Disk images can be signed, notarized, and stapled. When you distribute apps using disk images and Sparkle, your users would find it straightforwardly effortless to install, use, and update.

But creating disk images is an involved task for the developer. There are so many tasks involved to package an application into a disk image ready for the user. This includes:

That’s a lot of steps to do manually on each release. Thankfully all of those steps can be automated and added to your continuous integration environment. Hence you can automatically get a finished disk image on every release. Even if you don’t have a build server, integrating this to your Xcode build would be a snap. Read on to learn how to do this.

Before you begin, make sure that you have these at hand:

The create-dmg command would cover steps 1–5 of the disk image creation process. It would create a disk image out of your application bundle, add a symbolic link to the /Applications folder as well as adding a background image when the disk image is shown in a Finder window.

The following is a sample command-line invocation of create-dmg. It packages YourAppName.app that is located in StagingDir into disk image AppPackage.dmg. A staging folder is required since create-dmg would copy everything inside it to the resulting disk image.

For more information on each parameter, you can look into create-dmg’s built-in documentation:

Should this generic background is not sufficient, you can use my Affinity Designer template to create your own background. Download the template file from project DiskImageDistribution. in my Github account.

create-dmg would create an almost-ready disk image. However you would need to sign and notarize this disk image before distributing it.

Run the following command to sign a disk image using your Developer ID account. You shouldn’t notarize the disk image without signing it first — although the notarization process may give it a pass, Catalina’s Gatekeeper won’t trust it if the application bundle inside it was signed on 1 June 2019 or later.

You could use the following command to check the notarization process, armed with the UUID returned upon upload.

You could invoke the above command repeatedly to see whether the notarization process is completed, or wait for an e-mail from Apple telling you that it is done. 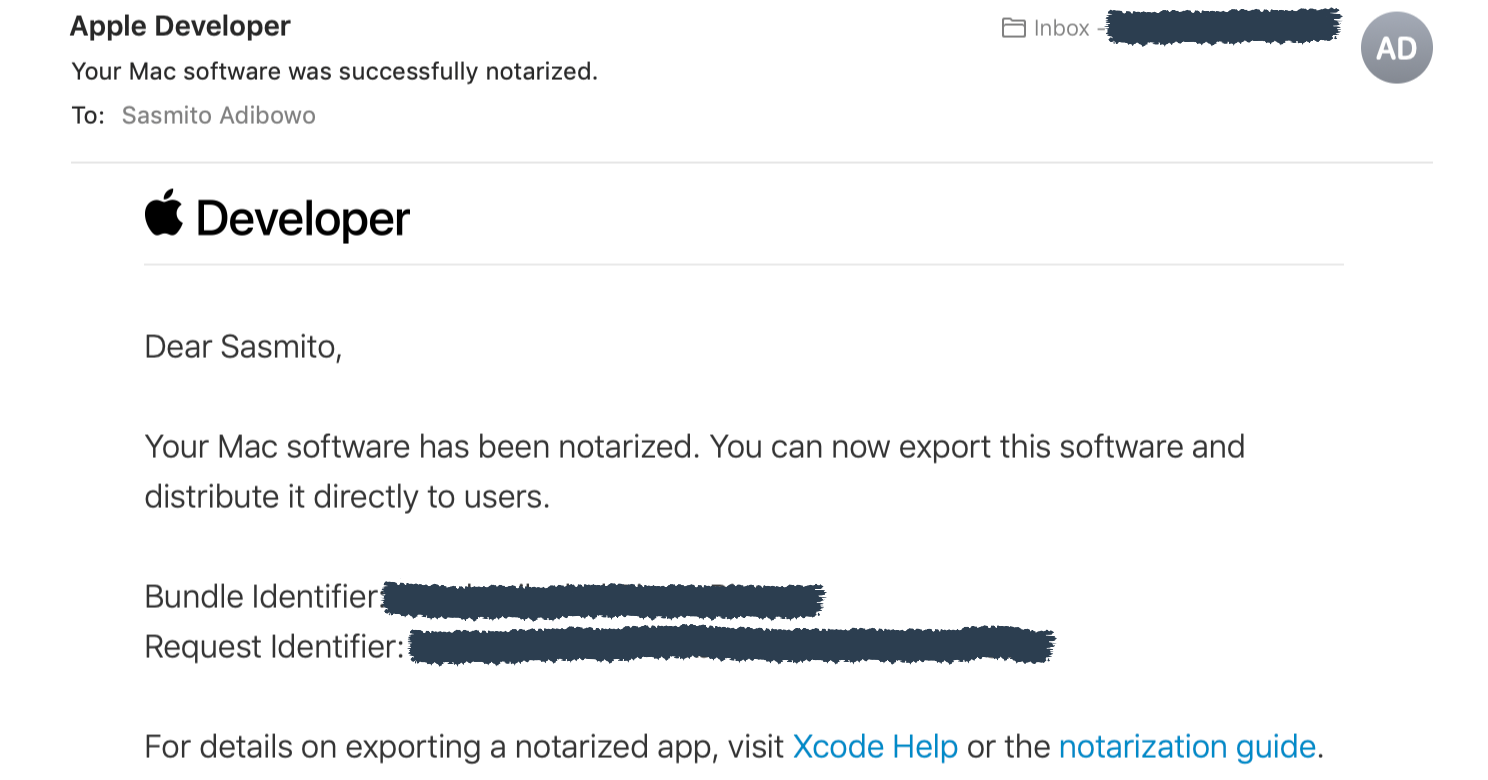 When the notarization process is completed, the command would provide a URL to the notarization log in the LogURL field returned. Hence if something went wrong, you could fetch that URL and see what was the issue.

Notarization would keep a copy of your package in Apple’s servers and create an identifier based on its hash. When Gatekeeper would need to check whether a package is notarized, it would derive its hash and use it to contact Apple’s servers to find out whether it was notarized. If Gatekeeper can’t connect to the Internet, it would simply refuse to open the package.

Use the following command to staple the notarization certificate on to the disk image.

When you’ve completed everything, verify the resulting disk image using the following command:

When it returns with a “Notarized Developer ID” then the package is ready and valid for notarization.

Putting it All Together

I’ve written a shell script that you can use as a starting point to integrate notarization into your build pipeline. You can also invoke this script as a custom build phase in Xcode.

Integrate notarization into your continuous integration pipeline. You don’t need to sign and notarize every build – just the ones that you are going to distribute, including beta versions.

My latest guest post for Waldo shows you how to use SQLite databases using Swift through Gus Muller’s FMDB library.   Head to Waldo for the article: Getting Started with FMDB and Swift: A Guide.   Avoid Delays and Rejections when Submitting Your App to The Store! Follow my FREE cheat sheets to design, develop,…
END_OF_DOCUMENT_TOKEN_TO_BE_REPLACED

Comparing SwiftUI with storyboards for iOS development - which one is better when.
END_OF_DOCUMENT_TOKEN_TO_BE_REPLACED

Check out my latest guest post at Waldo: How to Create an iOS App ID: 2 Quick and Easy Methods. You will learn: What an App ID is in Apple’s ecosystems. How to create App IDs. What is an App Store ID and how it relates to an App ID. How to find an App…
END_OF_DOCUMENT_TOKEN_TO_BE_REPLACED

By default, Xcode Server signs binaries using a development certificate, not a distribution one. Unfortunately there is no built-in option to make it use a Developer ID certificate. What's the solution?
END_OF_DOCUMENT_TOKEN_TO_BE_REPLACED

Notarization is a fully automated process, unlike going through the App Store which involves manual human review. At least it's automated in Apple's side. However it could consume a non-negligible amount of brain bandwidth in your side. How about automating it?
END_OF_DOCUMENT_TOKEN_TO_BE_REPLACED

Continuous testing is paramount to ship serous software. Yet continuously running tests is a pensive productivity plight. Is it possible to automate testing? Yes you can.
END_OF_DOCUMENT_TOKEN_TO_BE_REPLACED

Xcode 13 brought a new notarization tool. What is it and how much better compared to the old one?
END_OF_DOCUMENT_TOKEN_TO_BE_REPLACED

“I want a REST API for notarization since it’s impossible to parse text coming from the notarization tool reliably.” What if I say that the command line API is the best method for integration with build pipelines? Read on to find out more.
END_OF_DOCUMENT_TOKEN_TO_BE_REPLACED

Notarization may take just a few clicks in Xcode, but this takes time and a security risk. You include notarization as part of your continuous delivery pipeline. Here's how.
END_OF_DOCUMENT_TOKEN_TO_BE_REPLACED

Distributing binaries for macOS outside the App Store requires registering it with Apple beforehand—notarizing it. But do you know what can be submitted for notarization?
END_OF_DOCUMENT_TOKEN_TO_BE_REPLACED

A popular image processing library has a vulnerability that can cause denial of service by a maliciously-crafted file causing the application to consume too much memory. Should you upgrade or is there another solution?
END_OF_DOCUMENT_TOKEN_TO_BE_REPLACED

The App Store Small Business Program offers lowered commission cost with one big caveat: no app transfer. But apps graduating from a "hobby" into a "small business" would definitely involve transferring ownership. Read how to transfer apps without engaging in the app transfer process and losing out on the program's benefits.
END_OF_DOCUMENT_TOKEN_TO_BE_REPLACED

Compiled code can conclude the instruction set through conditional compilation. But what about processor-independent scripts? Finding out the current native processor architecture and emulation status thereof would be very useful in build systems that doesn't support cross-compilations. Find out how a shell script can find out whether it is running under Apple's processor, Intel, or emulated.
END_OF_DOCUMENT_TOKEN_TO_BE_REPLACED

Being in the "bleeding edge" has its drawbacks in addition to benefits. Blazing a fresh trail means it's more rough and plenty of unknowns. Similarly in open source software, support for the ARM architecture is slim and even slimmer on the Mac. But there is a way to run "legacy" Intel-only command line apps on the Mac.
END_OF_DOCUMENT_TOKEN_TO_BE_REPLACED

Distributing macOS apps as ZIP archives has been quaint since Sierra. Today’s macOS packaging requirements mandates notarization, otherwise it would say that your app is suspicious. This often means distributing apps within disk images since this container format can be signed, notarized, and stapled.
END_OF_DOCUMENT_TOKEN_TO_BE_REPLACED

Publishing similar apps is considered spamming. Yet there are valid reasons to develop multiple apps from the same code base. Here is what you need to know to avoid being labeled as spammer by app reviewers.
END_OF_DOCUMENT_TOKEN_TO_BE_REPLACED

Some developers' app updates were rejected from the App Store because their apps look similar. Worse, some others were marked as spammer due to publishing apps that looks like another developer's app. How can you avoid this?
END_OF_DOCUMENT_TOKEN_TO_BE_REPLACED