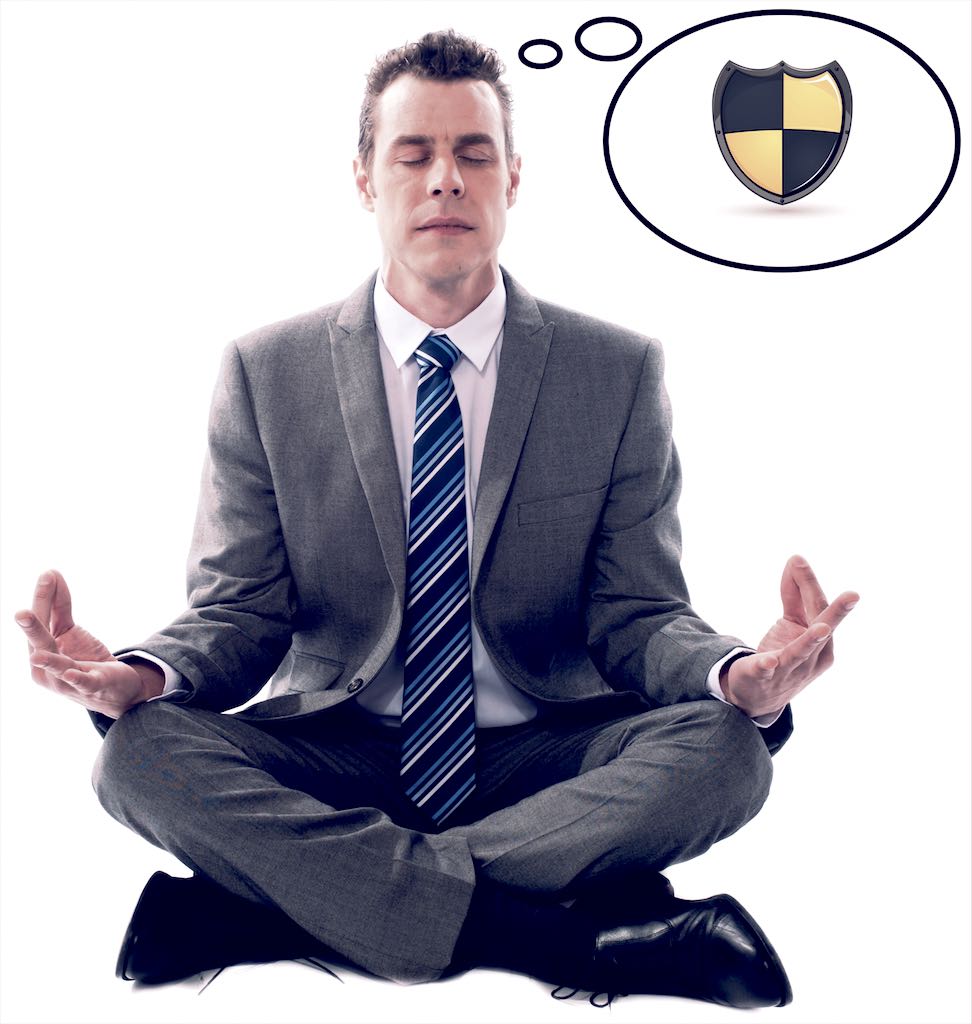 Is Your Server Ready for iOS 9 and El Capitan?

Apple is enforcing a stronger encryption that applications need to use when connecting to their backends. Is your server secure enough to meet Apple’s standards? Being HTTPS doesn’t necessarily imply that it’s good enough.

Apple’s latest operating system updates – iOS 9 and OS X El Capitan – are enforcing stronger network encryption. This is wonderful for users – however it could mean extra work for developers and system administrators.

In short, applications are strongly encouraged to use HTTPS, TLS 1.2 and perfect forward secrecy. You might be saying to yourself, “We’re already serving through HTTPS, so we’re good.” As it turns out, it may not be that simple. It isn’t for Microsoft and you could be affected as well. Yes, at least one of Microsoft’s web services isn’t yet up to Apple’s security standards as of this writing.

First some background story. We sell a desktop client for Yammer, which in turn Yammer is an enterprise social media service that was acquired by Microsoft. I’ve recently compiled the application on Xcode 7 and run it on OS X 10.11 GM candidate.

Practically all network requests failed with SSL handshake failures. The error was:

An SSL error has occurred and a secure connection to the server cannot be made.

Strange, but true. Then I turned off Application Transport Security as part of my diagnostics. The app works again. But then I thought to myself, “I couldn’t just turn this off – my users could become vulnerable to downgrade attacks.”

Suspecting that El Capitan doesn’t like Yammer’s wildcard certificate, I traced deep into AFNetworking’s code. I hoped to find some sort of “allow wildcard certificate” flag or response during negotiation with NSURLSession. I couldn’t find any answers there.

Then as I as I re-read the Application Transport Security Technical Note I thought, “Is it the TLS version?” I turned the setting down all the way to TLS 1.0. Still didn’t work.

At this point I’m just shooting in the dark. Fortunately there isn’t many other toggles to try. Then I toggled NSExceptionRequiresForwardSecrecy to NO and… Eureka! It worked!

Learning from my experience, if you’re developing an app that connects to Yammer, you need to place an additional entry in your app’s Info.plist called NSAppTransportSecurity and it should look like this:

Why NSAllowsArbitraryLoads = YES ? Wouldn’t that effectively disables App Transport Security? Yes, that’s kinda true. However users might need to use their Yammer accounts alongside a corporate intranet. For instance, some Yammer networks requires a 2nd level login through a Corporate intranet. Corporates tend to be very slow in updating to these technologies. If Yammer themselves are even not yet up-to-date with their security, expect intranet deployments to be even slower in adopting these more strict HTTPS requirements (nor since it’s an intranet, they may choose not to use HTTPS at all).

In any case we add an exception to yammer.com so that all access to Yammer API is secured. That is, App Transport Security would be in effect for yammer.com and its subdomains.

Furthermore we add NSExceptionAllowsInsecureHTTPLoads = NO just to make sure. You don’t really need to add this entry since NO is the default entry, but there’s a twofold reason for this:

Most importantly you should set NSExceptionRequiresForwardSecrecy to NO for yammer.com because Yammer doesn’t seem to support it as of this writing. Upon further investigation, apparently Yammer only supports the SHA–1/128 bit of the forward secrecy algorithm but El Capitan wants the stronger SHA–2/256 bit version.

You can use SSL Lab’s Scanner to test your own backend’s SSL conformance level. Otherwise if your backend is not accessible from the Internet, this script from SuperUser could be useful as well. 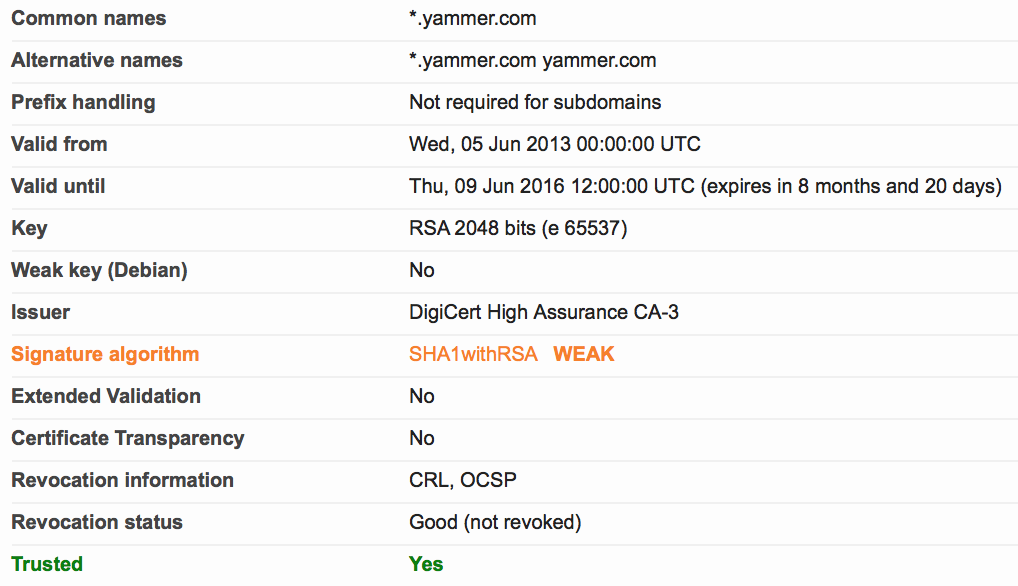 In any case this App Transport Security will take effect only if you build your app on the latest SDK. This way iOS 9 and OS X 10.11 won’t break old apps that aren’t yet updated. Of course if you’re too lazy (or can’t be bothered), you could just stick to the older Xcode to build/update your app and you can get away from handling this SSL thing for now.

That’s all folks. Until next time.

0 thoughts on “Is Your Server Ready for iOS 9 and El Capitan?”

Check out my latest guest post at Waldo: How to Create an iOS App ID: 2 Quick and Easy Methods. You will learn: What an App ID is in Apple’s ecosystems. How to create App IDs. What is an App Store ID and how it relates to an App ID. How to find an App…
END_OF_DOCUMENT_TOKEN_TO_BE_REPLACED

By default, Xcode Server signs binaries using a development certificate, not a distribution one. Unfortunately there is no built-in option to make it use a Developer ID certificate. What's the solution?
END_OF_DOCUMENT_TOKEN_TO_BE_REPLACED

Notarization is a fully automated process, unlike going through the App Store which involves manual human review. At least it's automated in Apple's side. However it could consume a non-negligible amount of brain bandwidth in your side. How about automating it?
END_OF_DOCUMENT_TOKEN_TO_BE_REPLACED

Continuous testing is paramount to ship serous software. Yet continuously running tests is a pensive productivity plight. Is it possible to automate testing? Yes you can.
END_OF_DOCUMENT_TOKEN_TO_BE_REPLACED

Xcode 13 brought a new notarization tool. What is it and how much better compared to the old one?
END_OF_DOCUMENT_TOKEN_TO_BE_REPLACED

“I want a REST API for notarization since it’s impossible to parse text coming from the notarization tool reliably.” What if I say that the command line API is the best method for integration with build pipelines? Read on to find out more.
END_OF_DOCUMENT_TOKEN_TO_BE_REPLACED

Notarization may take just a few clicks in Xcode, but this takes time and a security risk. You include notarization as part of your continuous delivery pipeline. Here's how.
END_OF_DOCUMENT_TOKEN_TO_BE_REPLACED

Distributing binaries for macOS outside the App Store requires registering it with Apple beforehand—notarizing it. But do you know what can be submitted for notarization?
END_OF_DOCUMENT_TOKEN_TO_BE_REPLACED

A popular image processing library has a vulnerability that can cause denial of service by a maliciously-crafted file causing the application to consume too much memory. Should you upgrade or is there another solution?
END_OF_DOCUMENT_TOKEN_TO_BE_REPLACED

The App Store Small Business Program offers lowered commission cost with one big caveat: no app transfer. But apps graduating from a "hobby" into a "small business" would definitely involve transferring ownership. Read how to transfer apps without engaging in the app transfer process and losing out on the program's benefits.
END_OF_DOCUMENT_TOKEN_TO_BE_REPLACED

Compiled code can conclude the instruction set through conditional compilation. But what about processor-independent scripts? Finding out the current native processor architecture and emulation status thereof would be very useful in build systems that doesn't support cross-compilations. Find out how a shell script can find out whether it is running under Apple's processor, Intel, or emulated.
END_OF_DOCUMENT_TOKEN_TO_BE_REPLACED

Being in the "bleeding edge" has its drawbacks in addition to benefits. Blazing a fresh trail means it's more rough and plenty of unknowns. Similarly in open source software, support for the ARM architecture is slim and even slimmer on the Mac. But there is a way to run "legacy" Intel-only command line apps on the Mac.
END_OF_DOCUMENT_TOKEN_TO_BE_REPLACED

Distributing macOS apps as ZIP archives has been quaint since Sierra. Today’s macOS packaging requirements mandates notarization, otherwise it would say that your app is suspicious. This often means distributing apps within disk images since this container format can be signed, notarized, and stapled.
END_OF_DOCUMENT_TOKEN_TO_BE_REPLACED

Publishing similar apps is considered spamming. Yet there are valid reasons to develop multiple apps from the same code base. Here is what you need to know to avoid being labeled as spammer by app reviewers.
END_OF_DOCUMENT_TOKEN_TO_BE_REPLACED

Some developers' app updates were rejected from the App Store because their apps look similar. Worse, some others were marked as spammer due to publishing apps that looks like another developer's app. How can you avoid this?
END_OF_DOCUMENT_TOKEN_TO_BE_REPLACED

It would be a big blow when Apple rejects your suite of apps, call it "spam" and tell you to move into a container app. If this is happening to you, then this article would be a solution to your predicament.
END_OF_DOCUMENT_TOKEN_TO_BE_REPLACED

Some people probably wouldn't have found success through social media. Learn the importance to present your best self in social media and how to do it.
END_OF_DOCUMENT_TOKEN_TO_BE_REPLACED