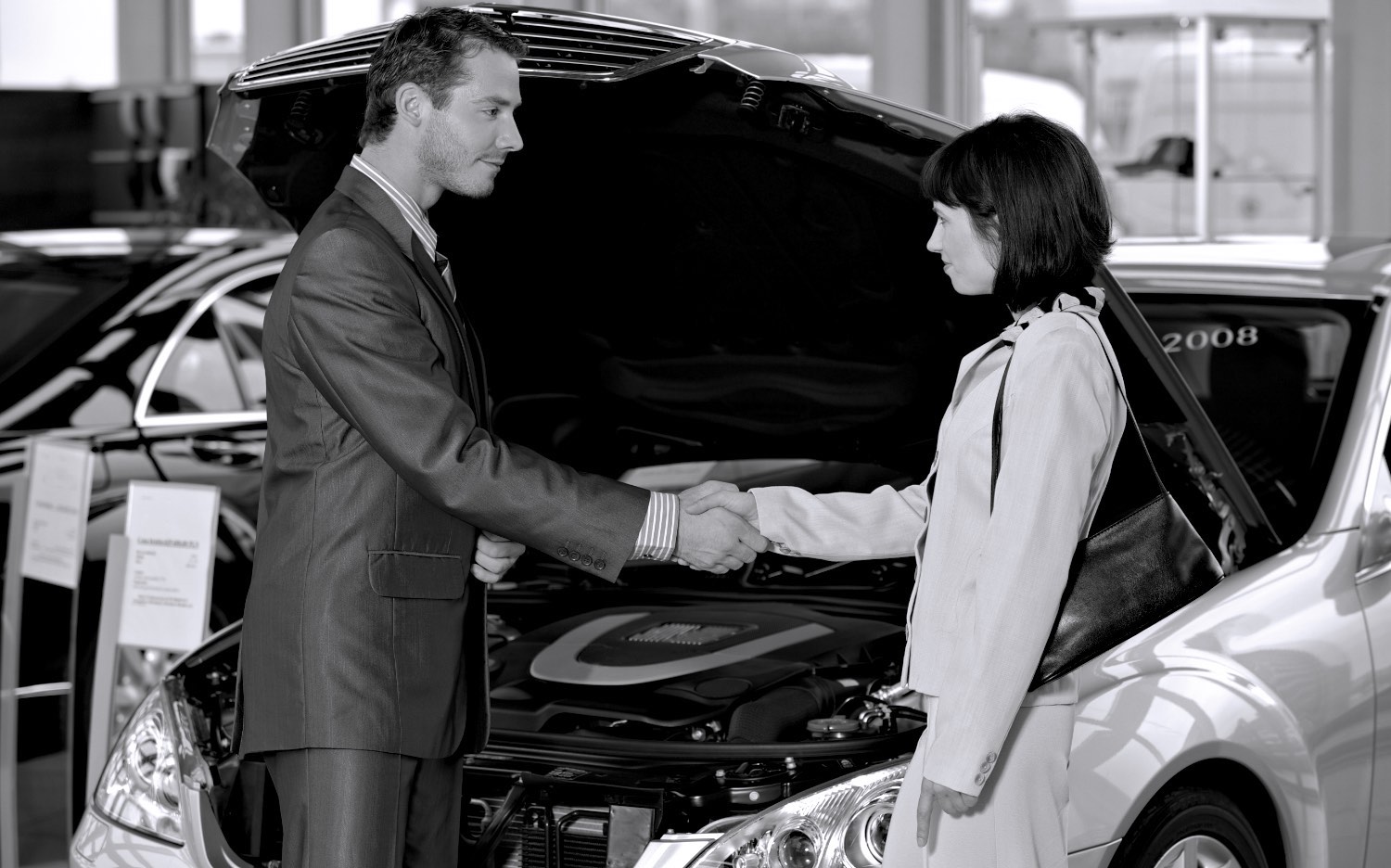 Futures/promises are great to coordinate persistence and views to ensure responsiveness in today’s native apps. However bringing thousands of lines of foreign code just to have this small functionality may not be cool. Here’s a hundred-line implementation of futures/promises in Swift 3.1

Although having been known since 1976, the futures and promises pattern gets a new breath of life as the collective programming body of knowledge moves away from thread-spawning into preference of asynchronous processing (refer to the c10k problem). It appears that node.js stack and community have been in the forefront of this renaissance of promises attributed to the number of subsequent libraries in other languages that emulates how JavaScript does asynchronous-ness.  Probably this is rooted  from the single-threaded nature of JavaScript as a programming language and not many other imperative languages has direct support of parallelism (most, maybe except for Ada, has parallelism mostly done as library calls and not built into the compiler).

In the sphere of Apple computers programming, there have been a number of libraries (e.g. BrightFutures) or frameworks (e.g. ReactiveCocoa) implementing the future/promise pattern. However you rightly wouldn’t want to include such complex libraries or frameworks into your project when your needs are fairly modest — even if they are open source. Adding more dependencies into your project means increasing the risk of maintenance burden later on. There’s no guarantee that these libraries are going to be maintained to remain compatible with changes in the operating system API or language features (e.g. Swift 3.x to Swift 4.x). There’s not even any guarantee that the maintainers will keep their own API stable, and this impacts your code and could be detrimental to your own productivity during maintenance (this latter part is probably more relevant for those developing products but less so in the world of one-shot consulting gigs). Hence if you expect to maintain the project for a long period of time — over two operating system releases or so — you should practice restraint on adding 3rd party dependencies.

I’ve recently found futures/promises to be useful in state preservation and restoration, notably with respect of coordinating UI state restoration of a tvOS app with loading the associated data from persistent storage. Having a promise in place of the persistent store object greatly simplifies code paths handling different orders that persisted data can be shown on-screen.  This was part of my Wake on LAN app for the Apple TV and a future object is used to wrap references to the primary persistence manager.

Normally without state restoration, data are loaded first and then the user interface is displayed second. However when the user interface was just restored, then the it gets created and shown before the time data are loaded from persistent storage. During restoration time, as soon as the application completes initialization, every view controller that was preserved gets restored — regardless whether the underlying data store was ready or not during restore time. In turn, those user interface elements are expected to configure itself from information that was given out when it was preserved. Likely the persistent store would only be available after restoration has completed. That’s why those view controllers would need to handle two cases of data loading time — the normal case in which data were readily available at viewDidLoad and the restoration case in which data were only available some time later after it had been shown on screen. 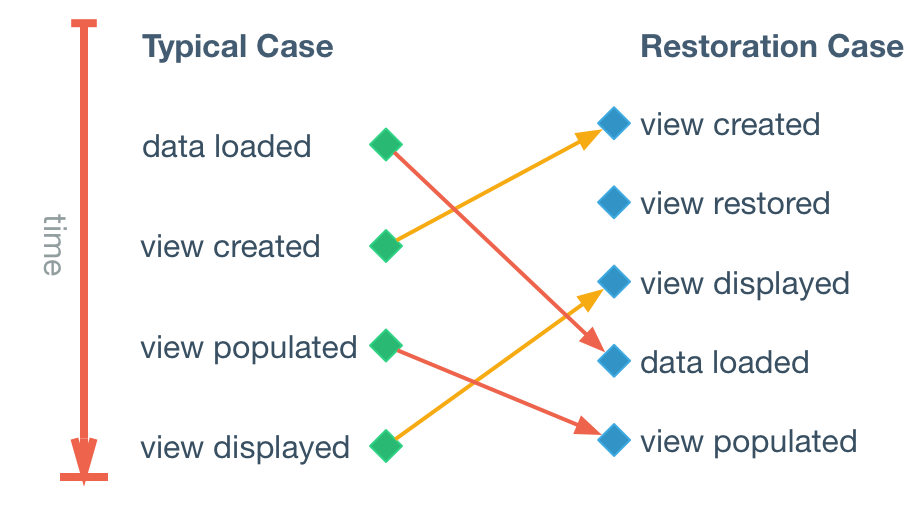 This diagram compares the “typical” case vs the “restoration” case. Typically the persistence layer (e.g. Core Data stack) have been set up and the data items are loaded prior to displaying the view. However the restoration mechanism instantiates, restores, and displays the user interface prior to handing it back to application code. Hence during restoration, views gets initialized with dummy data obtained from the restoration information and then reloads itself from the “official source” when the latter becomes available.

Since my needs of futures for this project were pretty modest, I shied away from bringing in complex libraries for it. Indeed, my bare-bones implementation for future/promises is only about 100 lines. The public interface of the class was loosely inspired by Java’s CompletableFuture class but only with the methods that I needed at the time.

The class uses two dispatch queues internally. One is a privately-owned serial queue for coordinating access to the promised object and the corresponding list of promise completion handlers. Whereas the other dispatch queue is for invoking the completion handlers when the promise gets fulfilled. That last one defaults to the global concurrent queue and can be overridden at construction time to use any other queue. This is to fulfill the Cocoa convention of completion handlers being called “in the main queue or an arbitrary queue”. Since it’s not a user interface class, it doesn’t make sense to default it to the main queue.

In the above diagram, a, b, and c are clients wanting the promised object. Both a and b requests the object prior to the promise being fulfilled, hence their completion handlers are queued and retained. However client c made the request when the object is already available, and thus its completion handler gets called almost immediately. Registrations to get the promised object can be done from any dispatch queue since the future would simply re-dispatch to an internal serial queue to prevent any race condition. However, the callbacks are done on the callback queue (by default is a global concurrent queue) regardless of whether the request was queued or not, to ensure uniformity of the behavior.

Last but not least, the class was written in Swift 3.1 (Xcode 8 era). BSD-licensed for use in your project. Hopefully there wont be any big changes when Xcode 9 hits.

That’s all for now, take care.

0 thoughts on “A Swift Promise”

My latest guest post for Waldo shows you how to use SQLite databases using Swift through Gus Muller’s FMDB library.   Head to Waldo for the article: Getting Started with FMDB and Swift: A Guide.   Avoid Delays and Rejections when Submitting Your App to The Store! Follow my FREE cheat sheets to design, develop,…
END_OF_DOCUMENT_TOKEN_TO_BE_REPLACED

Comparing SwiftUI with storyboards for iOS development - which one is better when.
END_OF_DOCUMENT_TOKEN_TO_BE_REPLACED

Check out my latest guest post at Waldo: How to Create an iOS App ID: 2 Quick and Easy Methods. You will learn: What an App ID is in Apple’s ecosystems. How to create App IDs. What is an App Store ID and how it relates to an App ID. How to find an App…
END_OF_DOCUMENT_TOKEN_TO_BE_REPLACED

By default, Xcode Server signs binaries using a development certificate, not a distribution one. Unfortunately there is no built-in option to make it use a Developer ID certificate. What's the solution?
END_OF_DOCUMENT_TOKEN_TO_BE_REPLACED

Notarization is a fully automated process, unlike going through the App Store which involves manual human review. At least it's automated in Apple's side. However it could consume a non-negligible amount of brain bandwidth in your side. How about automating it?
END_OF_DOCUMENT_TOKEN_TO_BE_REPLACED

Continuous testing is paramount to ship serous software. Yet continuously running tests is a pensive productivity plight. Is it possible to automate testing? Yes you can.
END_OF_DOCUMENT_TOKEN_TO_BE_REPLACED

Xcode 13 brought a new notarization tool. What is it and how much better compared to the old one?
END_OF_DOCUMENT_TOKEN_TO_BE_REPLACED

“I want a REST API for notarization since it’s impossible to parse text coming from the notarization tool reliably.” What if I say that the command line API is the best method for integration with build pipelines? Read on to find out more.
END_OF_DOCUMENT_TOKEN_TO_BE_REPLACED

Notarization may take just a few clicks in Xcode, but this takes time and a security risk. You include notarization as part of your continuous delivery pipeline. Here's how.
END_OF_DOCUMENT_TOKEN_TO_BE_REPLACED

Distributing binaries for macOS outside the App Store requires registering it with Apple beforehand—notarizing it. But do you know what can be submitted for notarization?
END_OF_DOCUMENT_TOKEN_TO_BE_REPLACED

A popular image processing library has a vulnerability that can cause denial of service by a maliciously-crafted file causing the application to consume too much memory. Should you upgrade or is there another solution?
END_OF_DOCUMENT_TOKEN_TO_BE_REPLACED

The App Store Small Business Program offers lowered commission cost with one big caveat: no app transfer. But apps graduating from a "hobby" into a "small business" would definitely involve transferring ownership. Read how to transfer apps without engaging in the app transfer process and losing out on the program's benefits.
END_OF_DOCUMENT_TOKEN_TO_BE_REPLACED

Compiled code can conclude the instruction set through conditional compilation. But what about processor-independent scripts? Finding out the current native processor architecture and emulation status thereof would be very useful in build systems that doesn't support cross-compilations. Find out how a shell script can find out whether it is running under Apple's processor, Intel, or emulated.
END_OF_DOCUMENT_TOKEN_TO_BE_REPLACED

Being in the "bleeding edge" has its drawbacks in addition to benefits. Blazing a fresh trail means it's more rough and plenty of unknowns. Similarly in open source software, support for the ARM architecture is slim and even slimmer on the Mac. But there is a way to run "legacy" Intel-only command line apps on the Mac.
END_OF_DOCUMENT_TOKEN_TO_BE_REPLACED

Distributing macOS apps as ZIP archives has been quaint since Sierra. Today’s macOS packaging requirements mandates notarization, otherwise it would say that your app is suspicious. This often means distributing apps within disk images since this container format can be signed, notarized, and stapled.
END_OF_DOCUMENT_TOKEN_TO_BE_REPLACED

Publishing similar apps is considered spamming. Yet there are valid reasons to develop multiple apps from the same code base. Here is what you need to know to avoid being labeled as spammer by app reviewers.
END_OF_DOCUMENT_TOKEN_TO_BE_REPLACED

Some developers' app updates were rejected from the App Store because their apps look similar. Worse, some others were marked as spammer due to publishing apps that looks like another developer's app. How can you avoid this?
END_OF_DOCUMENT_TOKEN_TO_BE_REPLACED