Google investing in a new biotechnology company named Calico, some analysts speculate it is aiming to harness its big data processing capabilities to support discoveries. Is big data the next big thing which techies need to follow?

A few days ago I read Time magazine’s main article “Can Google Solve Death?” which my father-in-law brought. I found the article name intriguing. Although after reading thorough the article, it is about Google investing in a new biotechnology company Calico which aims in extending human’s health and life. Lets face it, having a long life but in poor health is no fun.

Google is not explaining the red dots on why a tech company would just jump to a biotech development. But some analysts speculate it is aiming to harness its big data processing capabilities to support further discoveries. It sorts of make sense or maybe Larry Page is just paranoid with his own mortality.

But it does bring the next question, is big data the next big thing which techies need to follow? Such as Java a decade ago? Lets have a look at it again.

Big data arise because the world is more and more connected now, and there are more tools capturing the sources of information in sciences. Looking into the future, more and more data will be captured. As of 2012, every day 2.5 quintillion (2.5×1018) bytes of data were created.

According to Wikipedia, Big Data is the term for a collection of data sets so large and complex that it becomes difficult to process using on-hand database management tools or traditional data processing applications. The size of the data itself is not important, it can be several Gigabytes to Zillion of petabytes. The failure of traditional data processing to efficiently process them is the defining point. Due to improvements in the current data processing technologies, the size of the data has been a running target, some data which were unable to be processed efficiently can be processed efficiently.

But real world problems cannot wait until traditional data processing technologies ripen. That’s where big data technologies jump in. The hope is with such large data, government and organisations can make a better decisions. Right now big companies and western government, are racing to profit from big data analytics, which is estimated at around 5.1 Billion dollars for 2011 and grows at around 10% annually. .

Gaartner has compiled the top 10 technology trends in which big data is mentioned as part of implementing hybrid IT and cloud architecture. Where data can come in multiple forms and source and not just from a single data warehouse.

There are numerous approach on how to manage big data, some of them are propertiery like Oracle NoSQL, SAS Data Management others like Hadoop are open source.

Hadoop is based on the approach develop by Google to manage internet indexing, there were no product available for them then, so they had to make it themselves. A huge cluster of commodity servers is managed by the framework, each has some copy of the data, and they do not share any memory or disk. If a server went down, it would not be an issue since there are several copies of the data. Hadoop maps the operation out to all of those servers, they run in parallel and then it will reduce the results back into a single result set, this is called MapReduce.Now you can even create the cluster in the cloud.

Unfortunately for the ordinary techies it will be difficult to self learn on how to efficiently manage big data. Because if you try to install a framework like Hadoop to your desktop or laptop, the performance will be poor, you can’t really see it perform, it will only shine if you crunch it huge data, and the approach of working with Hadoop is still rudimentary. If you are lucky try to get yourself into a large project which concerns big data. The good news is they are getting better, and if you can get your hands into it, you can be one of the player in this uncharted territory. If things where simple and unchallenging, you won’t get much rewards. 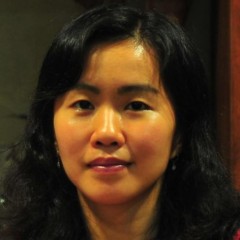 View all posts by Aireen Deviani
Skip back to main navigation

My latest guest post for Waldo shows you how to use SQLite databases using Swift through Gus Muller’s FMDB library.   Head to Waldo for the article: Getting Started with FMDB and Swift: A Guide.   Avoid Delays and Rejections when Submitting Your App to The Store! Follow my FREE cheat sheets to design, develop,…
END_OF_DOCUMENT_TOKEN_TO_BE_REPLACED

Comparing SwiftUI with storyboards for iOS development - which one is better when.
END_OF_DOCUMENT_TOKEN_TO_BE_REPLACED

Check out my latest guest post at Waldo: How to Create an iOS App ID: 2 Quick and Easy Methods. You will learn: What an App ID is in Apple’s ecosystems. How to create App IDs. What is an App Store ID and how it relates to an App ID. How to find an App…
END_OF_DOCUMENT_TOKEN_TO_BE_REPLACED

By default, Xcode Server signs binaries using a development certificate, not a distribution one. Unfortunately there is no built-in option to make it use a Developer ID certificate. What's the solution?
END_OF_DOCUMENT_TOKEN_TO_BE_REPLACED

Notarization is a fully automated process, unlike going through the App Store which involves manual human review. At least it's automated in Apple's side. However it could consume a non-negligible amount of brain bandwidth in your side. How about automating it?
END_OF_DOCUMENT_TOKEN_TO_BE_REPLACED

Continuous testing is paramount to ship serous software. Yet continuously running tests is a pensive productivity plight. Is it possible to automate testing? Yes you can.
END_OF_DOCUMENT_TOKEN_TO_BE_REPLACED

Xcode 13 brought a new notarization tool. What is it and how much better compared to the old one?
END_OF_DOCUMENT_TOKEN_TO_BE_REPLACED

“I want a REST API for notarization since it’s impossible to parse text coming from the notarization tool reliably.” What if I say that the command line API is the best method for integration with build pipelines? Read on to find out more.
END_OF_DOCUMENT_TOKEN_TO_BE_REPLACED

Notarization may take just a few clicks in Xcode, but this takes time and a security risk. You include notarization as part of your continuous delivery pipeline. Here's how.
END_OF_DOCUMENT_TOKEN_TO_BE_REPLACED

Distributing binaries for macOS outside the App Store requires registering it with Apple beforehand—notarizing it. But do you know what can be submitted for notarization?
END_OF_DOCUMENT_TOKEN_TO_BE_REPLACED

A popular image processing library has a vulnerability that can cause denial of service by a maliciously-crafted file causing the application to consume too much memory. Should you upgrade or is there another solution?
END_OF_DOCUMENT_TOKEN_TO_BE_REPLACED

The App Store Small Business Program offers lowered commission cost with one big caveat: no app transfer. But apps graduating from a "hobby" into a "small business" would definitely involve transferring ownership. Read how to transfer apps without engaging in the app transfer process and losing out on the program's benefits.
END_OF_DOCUMENT_TOKEN_TO_BE_REPLACED

Compiled code can conclude the instruction set through conditional compilation. But what about processor-independent scripts? Finding out the current native processor architecture and emulation status thereof would be very useful in build systems that doesn't support cross-compilations. Find out how a shell script can find out whether it is running under Apple's processor, Intel, or emulated.
END_OF_DOCUMENT_TOKEN_TO_BE_REPLACED

Being in the "bleeding edge" has its drawbacks in addition to benefits. Blazing a fresh trail means it's more rough and plenty of unknowns. Similarly in open source software, support for the ARM architecture is slim and even slimmer on the Mac. But there is a way to run "legacy" Intel-only command line apps on the Mac.
END_OF_DOCUMENT_TOKEN_TO_BE_REPLACED

Distributing macOS apps as ZIP archives has been quaint since Sierra. Today’s macOS packaging requirements mandates notarization, otherwise it would say that your app is suspicious. This often means distributing apps within disk images since this container format can be signed, notarized, and stapled.
END_OF_DOCUMENT_TOKEN_TO_BE_REPLACED

Publishing similar apps is considered spamming. Yet there are valid reasons to develop multiple apps from the same code base. Here is what you need to know to avoid being labeled as spammer by app reviewers.
END_OF_DOCUMENT_TOKEN_TO_BE_REPLACED

Some developers' app updates were rejected from the App Store because their apps look similar. Worse, some others were marked as spammer due to publishing apps that looks like another developer's app. How can you avoid this?
END_OF_DOCUMENT_TOKEN_TO_BE_REPLACED