Graphic Design Tools that Developers Use

As a developer often you would need to create visuals for others to use. Whether it’s to explain ideas, to inform colleagues, or maybe to include in the software itself. Here is a comparison of the two graphics packages that I use as a developer and content creator.

Do any of you developers do your own graphics design?
If so, what graphic design tools do you use?

Guess what: as a developer and content creator, I often do my own graphics design. Mostly because I can’t afford good graphics designers – the ones that can create great artwork and user interface designs based off a few sentences. On the flip-side, if I have to tightly spec out what needs to be done — which is often the case for $5 artists on Fiverr — I might as well do it myself, with the help of a few clip arts and pre-existing samples that I can model from.

My graphics tools of choice at the moment are OmniGraffle 7.10.2 and Affinity Designer 1.6.1. OmniGraffle is mainly used for creating diagrams and wireframes whereas Affinity Designer for the “art”-type works: icons, button glyphs, and banner advertisements. I’ve tried using one app to take on the tasks the other app — with the intention of eventually de-commissioning that other less-used app — but ended up with grief and wasted time. Each app has its strengths and weaknesses and I don’t see one would replace the other very soon. 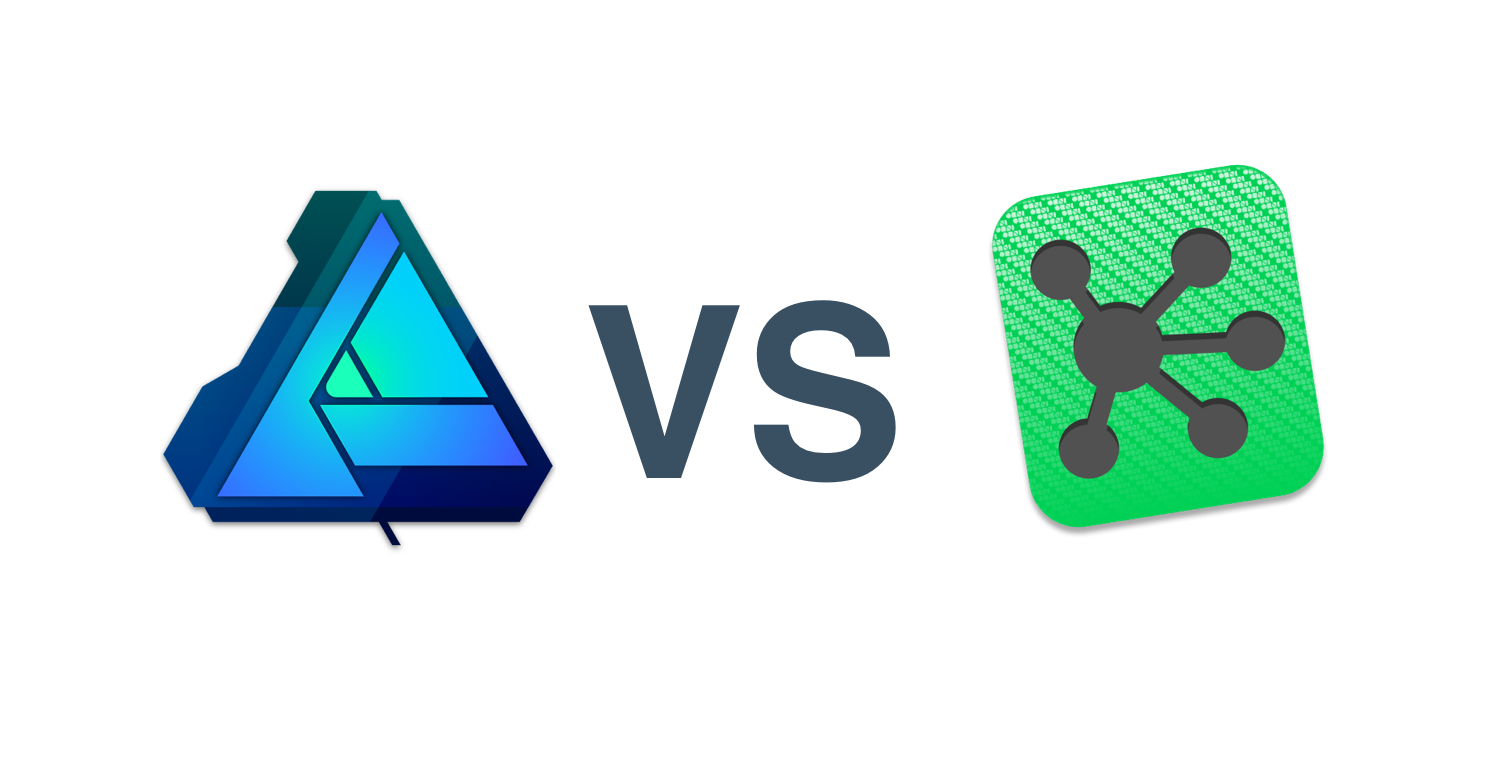 When choosing software tools, these are the general criteria that I follow:

Hence the choice came down to OmniGraffle and Affinity Designer. There are cheaper commercial software than these two, but rarely as capable or as supported. Remember that even free apps would require investment in terms of time and brain-juice, which are not free when you consider the grand scheme of things.

These are the positive sides of OmniGraffle:

Whereas the following are areas of the app that I feel needs improvement.

However there are some negative areas of Affinity Designer:

There’s a balance between “use the best tool for the job” and “when all you have is a hammer, everything looks like nails” — between many task-specific tools and just use one tool for all tasks. This balance is mostly a function of how many tools you are willing to learn (and expense) versus how diverse of the tasks that you need to do.

If you draw architecture diagrams (whether it’s Garret’s IA or TAM), flowcharts, or other blobs-connected-by-lines graphics, then OmniGraffle is the way to go. However for making icons (whether its application icons or button images), banners, or very custom artwork, then Affinity Designer is the better tool. Nevertheless when it comes to creating wireframes, both apps are equally capable — although I find that OmniGraffle is slightly easier due to its shared layers feature. As far as static visuals go, those two software packages are complementary enough to earn their places in my brain-space and the combination of the two are sufficient for 99% of the graphics work that I do.

5 thoughts on “Graphic Design Tools that Developers Use”

My latest guest post for Waldo shows you how to use SQLite databases using Swift through Gus Muller’s FMDB library.   Head to Waldo for the article: Getting Started with FMDB and Swift: A Guide.   Avoid Delays and Rejections when Submitting Your App to The Store! Follow my FREE cheat sheets to design, develop,…
END_OF_DOCUMENT_TOKEN_TO_BE_REPLACED

Comparing SwiftUI with storyboards for iOS development - which one is better when.
END_OF_DOCUMENT_TOKEN_TO_BE_REPLACED

Check out my latest guest post at Waldo: How to Create an iOS App ID: 2 Quick and Easy Methods. You will learn: What an App ID is in Apple’s ecosystems. How to create App IDs. What is an App Store ID and how it relates to an App ID. How to find an App…
END_OF_DOCUMENT_TOKEN_TO_BE_REPLACED

By default, Xcode Server signs binaries using a development certificate, not a distribution one. Unfortunately there is no built-in option to make it use a Developer ID certificate. What's the solution?
END_OF_DOCUMENT_TOKEN_TO_BE_REPLACED

Notarization is a fully automated process, unlike going through the App Store which involves manual human review. At least it's automated in Apple's side. However it could consume a non-negligible amount of brain bandwidth in your side. How about automating it?
END_OF_DOCUMENT_TOKEN_TO_BE_REPLACED

Continuous testing is paramount to ship serous software. Yet continuously running tests is a pensive productivity plight. Is it possible to automate testing? Yes you can.
END_OF_DOCUMENT_TOKEN_TO_BE_REPLACED

Xcode 13 brought a new notarization tool. What is it and how much better compared to the old one?
END_OF_DOCUMENT_TOKEN_TO_BE_REPLACED

“I want a REST API for notarization since it’s impossible to parse text coming from the notarization tool reliably.” What if I say that the command line API is the best method for integration with build pipelines? Read on to find out more.
END_OF_DOCUMENT_TOKEN_TO_BE_REPLACED

Notarization may take just a few clicks in Xcode, but this takes time and a security risk. You include notarization as part of your continuous delivery pipeline. Here's how.
END_OF_DOCUMENT_TOKEN_TO_BE_REPLACED

Distributing binaries for macOS outside the App Store requires registering it with Apple beforehand—notarizing it. But do you know what can be submitted for notarization?
END_OF_DOCUMENT_TOKEN_TO_BE_REPLACED

A popular image processing library has a vulnerability that can cause denial of service by a maliciously-crafted file causing the application to consume too much memory. Should you upgrade or is there another solution?
END_OF_DOCUMENT_TOKEN_TO_BE_REPLACED

The App Store Small Business Program offers lowered commission cost with one big caveat: no app transfer. But apps graduating from a "hobby" into a "small business" would definitely involve transferring ownership. Read how to transfer apps without engaging in the app transfer process and losing out on the program's benefits.
END_OF_DOCUMENT_TOKEN_TO_BE_REPLACED

Compiled code can conclude the instruction set through conditional compilation. But what about processor-independent scripts? Finding out the current native processor architecture and emulation status thereof would be very useful in build systems that doesn't support cross-compilations. Find out how a shell script can find out whether it is running under Apple's processor, Intel, or emulated.
END_OF_DOCUMENT_TOKEN_TO_BE_REPLACED

Being in the "bleeding edge" has its drawbacks in addition to benefits. Blazing a fresh trail means it's more rough and plenty of unknowns. Similarly in open source software, support for the ARM architecture is slim and even slimmer on the Mac. But there is a way to run "legacy" Intel-only command line apps on the Mac.
END_OF_DOCUMENT_TOKEN_TO_BE_REPLACED

Distributing macOS apps as ZIP archives has been quaint since Sierra. Today’s macOS packaging requirements mandates notarization, otherwise it would say that your app is suspicious. This often means distributing apps within disk images since this container format can be signed, notarized, and stapled.
END_OF_DOCUMENT_TOKEN_TO_BE_REPLACED

Publishing similar apps is considered spamming. Yet there are valid reasons to develop multiple apps from the same code base. Here is what you need to know to avoid being labeled as spammer by app reviewers.
END_OF_DOCUMENT_TOKEN_TO_BE_REPLACED

Some developers' app updates were rejected from the App Store because their apps look similar. Worse, some others were marked as spammer due to publishing apps that looks like another developer's app. How can you avoid this?
END_OF_DOCUMENT_TOKEN_TO_BE_REPLACED