The Story behind News Anchor

Finally News Anchor 1.0 is released – those of you who subscribes to my Facebook profile probably already know by now ^_^ News Anchor is an alternative news reader (RSS/ATOM feed client) for Mac OS X. It is a universal binary application designed to run on Leopard and Snow Leopard. The rest of this article describes how I came to make News Anchor and why is it different from the other news readers out there.

Why alternative? News Anchor gives what I feel is a “fresh take” on consuming RSS feeds. The traditional RSS readers looks and behaves more or less like an e-mail client or like an NNTP client. It displays a list of feeds in the left pane, a list of headlines in a top pane, and the story text in the main panel. This is the “traditional” user interface arrangement for a lot of article-based software – even MacJournal (the blogging/diary software that I use to write this article) is based on this format. The screenshot below shows one of these “traditional” news readers. 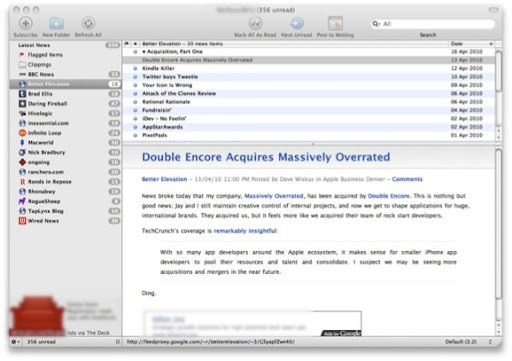 One RSS reader I know that tries to break out from this traditional format is Times (the Mac OS X Software, not the newspaper). Times renders RSS articles into a newspaper-like format. One of the plus points about Times is that you can glance at the headlines and brief summary of the news articles. Not to mention Times is one really good looking news reader, I have to admit. Below is a screenshot of Times. 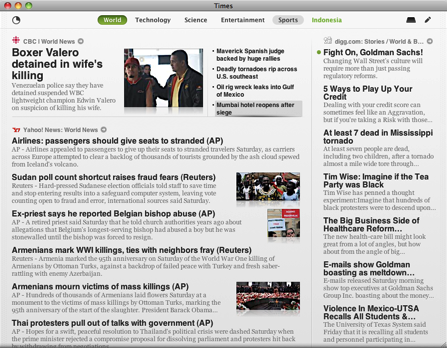 One of the problems I have with traditional news readers is I have to click on the RSS feed or headlines to read the news article. Times reduced this problem a bit, but even so I can only see a small portion of my news at a time with each click. Even in Times I have to scroll down in each section to see more news and I have to click on section tabs to view the other “newspaper pages”. This may seem not much of a problem if all I do is read the RSS, but it becomes an issue whenever I read the news in the morning while having breakfast. You see, I’ve got my hands full while eating breakfast and switching back and forth between my breakfast and the keyboard isn’t very practical – not to mention getting my laptop keyboard dirty and risk spilling my breakfast into my laptop (which would be a very expensive accident).

So I switched my morning news to video podcasts. Specifically I switched to the ABC World News Webcast by Charles Gibson (it was before Charles retires and replaced by Dianne Sawyer). The webcast was quite adequate to fulfill my morning news need for a while (note that I don’t have regular television and prefer not to have one due to space and time constraints). Even so the webcast has its own deficiencies:

News provided by RSS feeds are mostly good enough for me. Usually I read some world news, some macroeconomic financial news, and also the likes of Lifehacker and Gizmodo. So I searched for an RSS reader that can read out the news articles for me and requires minimal intervention from my side while enjoying the articles. One notable discovery I found is News At Seven, a research program by Northwestern University. It’s a pretty cool concept that aims to create an artificial intelligence application to browse the web for news and compile a news program in a talk show format. The project started back in 2006 and was featured in ABC’s world news at one time. It looks pretty promising. The primary obstacle is that after three years they don’t have any product that I can use yet (it was in late 2009 when I found out about their project). There was no downloadable trial version (not even for Windows) nor even a website that I can setup my news feeds and have it generate my news show, even with a pay-for membership. They’re probably aiming for the “holy grail” of news cast automation and don’t want to release any “interim” products. So I thought to my self, probably I can come out with something simpler but readily available fro the masses (i.e. regular people can download and use) and that’s how I came up with the idea to create News Anchor.

News Anchor presents RSS articles in a “television news” format. It has a virtual news anchor character that reads out the articles for you using Mac OS X text-to-speech technology. Furthermore it aggregates articles from several feeds and package it into a single news show episode that you can enjoy while keeping your hands off the keyboard. This way you can do something else (such as having breakfast) while enjoying your morning news. You can even just close your eyes and listen. However unlike regular television or webcast, you can pick and choose beforehand which news that you want to hear in a “set it and forget it” way. Configure your news channels once and have News Anchor automatically generate the show episodes for you. Shown below is a screenshot of News Anchor in action. In the example screen below, News Anchor was reading my Technology channel which contains (among others) a feed from Ars Technica and the article that was being read is about the browser ballot bug for Polish Windows users. The date and time displayed below the channel title is when the episode was generated (i.e. when the feed was read) . 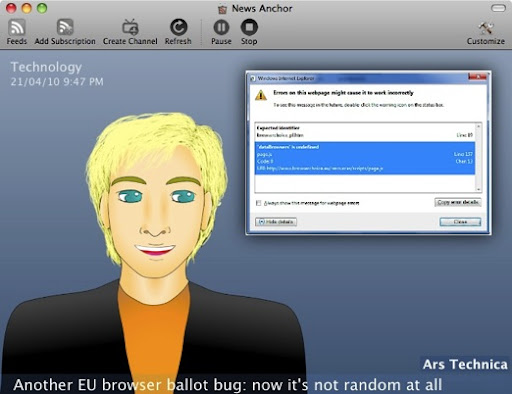 So there you go, a news reader that relieves you from reading the news yourself and let you sit back, relax, and enjoy your dose of morning worldly events ^_^ By the way, I’m offering a launch discount for readers of this blog. Just enter the coupon code MAVERICK1005 and you’ll be entitled to a 42% discount (yes, thats forty-two percent off the regular price) when you purchase News Anchor. This coupon is valid until the end of may 2010, GMT. Check out the News Anchor product page in Basil Salad Software website for details and a downloadable free trial.

I do hope you enjoy News Anchor. Until next post, bye-bye.

0 thoughts on “The Story behind News Anchor”