How To Gamify Your Public Relations Efforts

Are you working with a public relations firm and designing a mobile application as part of their campaign? Take a shortcut in your ideation process and see what are the important elements that need to be present in an application that needs to influence the public into doing what you want them to do. These are our hard-earned lessons and it’s yours to grab!

You shouldn’t try to tell people how to adapt. You should just nudge them in the right direction.
— Jonas Eliasson, TEDx Helvetia, September 2012 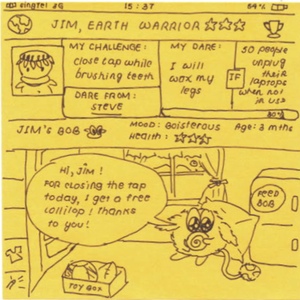 If you’re looking to design a mobile application to further your company’s public relation efforts or otherwise motivate the public to do your bidding, this article will show you how. These are a hard-earned lessons that we obtained during the Earth Hour hackathon last January.

So the backstory is that I attended an ideation competition last January organized by Newton Circus as part of their UP Singapore project. Structured as a hackathon, the event was primarily driven by the World Wildlife Fund (WWF) as a way to crowdsource mobile application ideas for their upcoming Earth Hour event. This is the last of a two-part series and speaks about the idea that we developed during the event, how we chose to strike out some elements of our idea that turned out to be crucial for winning the event, and what were the key elements of the winning idea that you can apply to your own ideation process. Whereas the first part focuses on the team dynamics during the event.

If you’re trying to develop a mobile application to motivate people to do what you want – as long as it’s within legal and moral bounds – these are the key elements that you need to have:

We decided to find the flaws in the Earth Hour “I Will If You Will” campaign and our proposal will be about fixing those flaws. Essentially the “I Will If You Will” campaign is a challenge posted by members of the public – and sometimes famous people – to do something silly if some number of people wants to do a particular good deed for the planet. The idea is to promote awareness for various small everyday actions that helps the ecosystem while having fun in the process.

Our team saw that the biggest flaw in this campaign is the lack of validation in the “you will” part. All that they need to do is click on the “Accept Challenge” button to be counted as a person who did that particular challenge. There is no way to find out whether the challenge was really fulfilled. Another problem area is that the challenges tend to be one-off actions and doesn’t encourage people to be consistent in doing it all the time. That won’t be much help for the long run. For example, turning up their air-con temperature by one degree won’t save much energy if only done for one day. 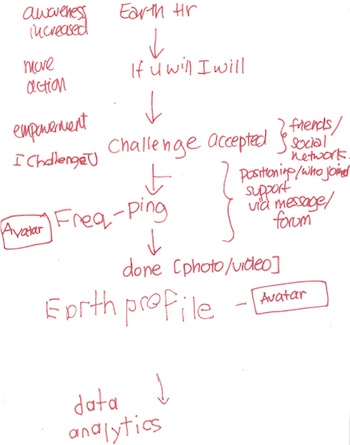 We saw that there need to be some way to validate the actions performed and keeping people engaged in incorporating environmentally-friendly actions in their daily lives. Then we designed this elaborate process of:

Also we designed a reminder system to keep people engaged and continue performing fulfilling their challenges and thus doing good deeds to the environment. All of these is unified by an “earth profile” of the person that shows the “earth points” that they have accumulate. Furthermore their continuous challenge fulfillments provides nurture to a virtual pet and thus the pet’s well-being is reflected through how much good deed they’ve done for the environment and how consistent they’re doing it. 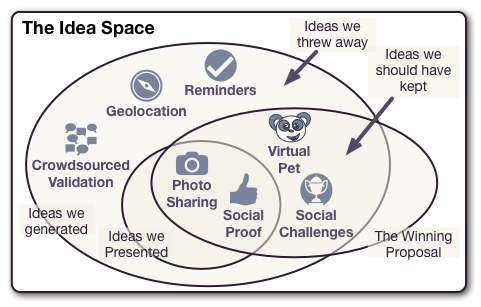 Because discussions were prolonged to very late at night we needed to quickly streamline the features and package it into a coherent workflow. Unfortunately because the team member who suggested the virtual pet idea (named “Bob”), in the process of streamlining that feature got removed along with the challenges, reminders, and various other tidbits.

We ended up of having a very streamlined “photo taking” app that augments Earth Hour’s “I Will If You Will” challenge. It focuses on the “You Will” part and allows people to submit evidences of their challenge fulfillment instead of just clicking on the “Accept Challenge” button. In turn this photo is posted to their Facebook and Twitter accounts to show their friends that they have done this good deed (and also somewhat validates the act) and to encourage their friends to do a similar good deed.

In retrospect we should have kept the virtual pet and have more iterations on making the social challenges more engaging and fun. Perhaps iterating on the virtual pet (“bob”) and make it more visually appealing thus attractive to the judges.

Anyhow you can find a copy of our presentation and clickable mockup of the app below. That’s all for now. Until next time!

0 thoughts on “How To Gamify Your Public Relations Efforts”

Check out my latest guest post at Waldo: How to Create an iOS App ID: 2 Quick and Easy Methods. You will learn: What an App ID is in Apple’s ecosystems. How to create App IDs. What is an App Store ID and how it relates to an App ID. How to find an App…
END_OF_DOCUMENT_TOKEN_TO_BE_REPLACED

By default, Xcode Server signs binaries using a development certificate, not a distribution one. Unfortunately there is no built-in option to make it use a Developer ID certificate. What's the solution?
END_OF_DOCUMENT_TOKEN_TO_BE_REPLACED

Notarization is a fully automated process, unlike going through the App Store which involves manual human review. At least it's automated in Apple's side. However it could consume a non-negligible amount of brain bandwidth in your side. How about automating it?
END_OF_DOCUMENT_TOKEN_TO_BE_REPLACED

Continuous testing is paramount to ship serous software. Yet continuously running tests is a pensive productivity plight. Is it possible to automate testing? Yes you can.
END_OF_DOCUMENT_TOKEN_TO_BE_REPLACED

Xcode 13 brought a new notarization tool. What is it and how much better compared to the old one?
END_OF_DOCUMENT_TOKEN_TO_BE_REPLACED

“I want a REST API for notarization since it’s impossible to parse text coming from the notarization tool reliably.” What if I say that the command line API is the best method for integration with build pipelines? Read on to find out more.
END_OF_DOCUMENT_TOKEN_TO_BE_REPLACED

Notarization may take just a few clicks in Xcode, but this takes time and a security risk. You include notarization as part of your continuous delivery pipeline. Here's how.
END_OF_DOCUMENT_TOKEN_TO_BE_REPLACED

Distributing binaries for macOS outside the App Store requires registering it with Apple beforehand—notarizing it. But do you know what can be submitted for notarization?
END_OF_DOCUMENT_TOKEN_TO_BE_REPLACED

A popular image processing library has a vulnerability that can cause denial of service by a maliciously-crafted file causing the application to consume too much memory. Should you upgrade or is there another solution?
END_OF_DOCUMENT_TOKEN_TO_BE_REPLACED

The App Store Small Business Program offers lowered commission cost with one big caveat: no app transfer. But apps graduating from a "hobby" into a "small business" would definitely involve transferring ownership. Read how to transfer apps without engaging in the app transfer process and losing out on the program's benefits.
END_OF_DOCUMENT_TOKEN_TO_BE_REPLACED

Compiled code can conclude the instruction set through conditional compilation. But what about processor-independent scripts? Finding out the current native processor architecture and emulation status thereof would be very useful in build systems that doesn't support cross-compilations. Find out how a shell script can find out whether it is running under Apple's processor, Intel, or emulated.
END_OF_DOCUMENT_TOKEN_TO_BE_REPLACED

Being in the "bleeding edge" has its drawbacks in addition to benefits. Blazing a fresh trail means it's more rough and plenty of unknowns. Similarly in open source software, support for the ARM architecture is slim and even slimmer on the Mac. But there is a way to run "legacy" Intel-only command line apps on the Mac.
END_OF_DOCUMENT_TOKEN_TO_BE_REPLACED

Distributing macOS apps as ZIP archives has been quaint since Sierra. Today’s macOS packaging requirements mandates notarization, otherwise it would say that your app is suspicious. This often means distributing apps within disk images since this container format can be signed, notarized, and stapled.
END_OF_DOCUMENT_TOKEN_TO_BE_REPLACED

Publishing similar apps is considered spamming. Yet there are valid reasons to develop multiple apps from the same code base. Here is what you need to know to avoid being labeled as spammer by app reviewers.
END_OF_DOCUMENT_TOKEN_TO_BE_REPLACED

Some developers' app updates were rejected from the App Store because their apps look similar. Worse, some others were marked as spammer due to publishing apps that looks like another developer's app. How can you avoid this?
END_OF_DOCUMENT_TOKEN_TO_BE_REPLACED

It would be a big blow when Apple rejects your suite of apps, call it "spam" and tell you to move into a container app. If this is happening to you, then this article would be a solution to your predicament.
END_OF_DOCUMENT_TOKEN_TO_BE_REPLACED

Some people probably wouldn't have found success through social media. Learn the importance to present your best self in social media and how to do it.
END_OF_DOCUMENT_TOKEN_TO_BE_REPLACED