How I Prematurely Killed My Second Game

I was in the middle of working on my first iPhone game and was so excited about iOS games, I began having ideas for more games. Then I realized that these won’t make it through the noise and tough competition in the App Store and decided to pivot from making games. Here is the back story how I came to that realization and on what conditions should I return to making games.

It was the brink of financial collapse. Traders and their minions from various banks and financial institutions are fighting fierce-fully for their job security. The trading floor became a warzone of self-preservation. There were casualties, debris, and sometimes, victories. Traders, Fight! 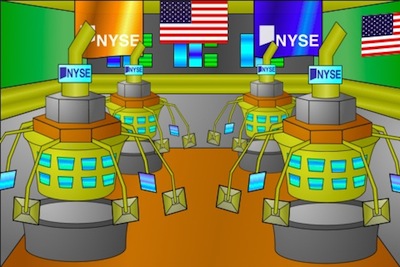 This was an idea that came to me when I was working at another game, AirKill – an arcade game inspired by the famous Hudson River Landing. The game was called Trader Fight, inspired by the financial meltdowns of 2008 that brought a blanket of fear and insecurity across the financial industry, among which I had a job in. In fact I got the idea at the height of the meltdown, early 2009. You can see the mock background screen of Trader Fight to the right.

Trader Fight was meant to be a turn-based arcade-battle game, following a genre similar to Microsoft Gorillas and World Worms Party, where finance traders – people who buy and sells stocks, bonds, futures, and various other financial instruments – are engaged in a fight among each others throwing various stationaries and office equipment to each other. It would use stock exchanges as battlefields, likely the NYSE. The player would fight as a trader from factions that are parodies of well-known banks such as Barleys Brothers, Credits & Cheese, and Overly Chinese Behemoth Conglomeration. In-game weaponries would be just as hilarious with mega-weapons like the “Subprime Nuke” which is a shower bomb of crummy straw shack houses.

But alas I had to kill off the game before it came to fruition. Why? After completing AirKill and having a few deep thoughts, Trader Fight didn’t look competitive. Gameplay mechanics wasn’t new and was taken from a long line of rehashes that includes Worms, iShoot, and recently Angry Birds. Nor can I compete in fancy artwork or extensive marketing push – as an independent bootstrapped indie developer – I simply don’t have that kind of budget (if a good custom icon design costs at least $400, a complete set of game artwork can easily costs 10x that). So that’s one lesson for me: if the game mechanics isn’t good, it’s likely not worth proceeding.

Another lesson I learn is to prototype the gameplay instead of the screenshots. Mock screens are okay for database-driven forms applications, but a lame fit for any interaction-intensive software like games. I made the mistake of drafting screenshots instead of writing a quick-and-dirty prototype that shows the important elements of the game. At least with prototypes I can use it to pre-market the game and show it to friends for quick feedback. Like what 2D Boy did when developing World of Goo. But this was in 2009 and there weren’t any easy-to-use game prototyping tools except for Adobe Flash (which costs about $500 back then and didn’t have any built-in physics engine). Thankfully nowadays we have tools like Codea that should make it easier to code these prototypes. Now if I could only find time to learn Lua….

0 thoughts on “How I Prematurely Killed My Second Game”

My latest guest post for Waldo shows you how to use SQLite databases using Swift through Gus Muller’s FMDB library.   Head to Waldo for the article: Getting Started with FMDB and Swift: A Guide.   Avoid Delays and Rejections when Submitting Your App to The Store! Follow my FREE cheat sheets to design, develop,…
END_OF_DOCUMENT_TOKEN_TO_BE_REPLACED

Comparing SwiftUI with storyboards for iOS development - which one is better when.
END_OF_DOCUMENT_TOKEN_TO_BE_REPLACED

Check out my latest guest post at Waldo: How to Create an iOS App ID: 2 Quick and Easy Methods. You will learn: What an App ID is in Apple’s ecosystems. How to create App IDs. What is an App Store ID and how it relates to an App ID. How to find an App…
END_OF_DOCUMENT_TOKEN_TO_BE_REPLACED

By default, Xcode Server signs binaries using a development certificate, not a distribution one. Unfortunately there is no built-in option to make it use a Developer ID certificate. What's the solution?
END_OF_DOCUMENT_TOKEN_TO_BE_REPLACED

Notarization is a fully automated process, unlike going through the App Store which involves manual human review. At least it's automated in Apple's side. However it could consume a non-negligible amount of brain bandwidth in your side. How about automating it?
END_OF_DOCUMENT_TOKEN_TO_BE_REPLACED

Continuous testing is paramount to ship serous software. Yet continuously running tests is a pensive productivity plight. Is it possible to automate testing? Yes you can.
END_OF_DOCUMENT_TOKEN_TO_BE_REPLACED

Xcode 13 brought a new notarization tool. What is it and how much better compared to the old one?
END_OF_DOCUMENT_TOKEN_TO_BE_REPLACED

“I want a REST API for notarization since it’s impossible to parse text coming from the notarization tool reliably.” What if I say that the command line API is the best method for integration with build pipelines? Read on to find out more.
END_OF_DOCUMENT_TOKEN_TO_BE_REPLACED

Notarization may take just a few clicks in Xcode, but this takes time and a security risk. You include notarization as part of your continuous delivery pipeline. Here's how.
END_OF_DOCUMENT_TOKEN_TO_BE_REPLACED

Distributing binaries for macOS outside the App Store requires registering it with Apple beforehand—notarizing it. But do you know what can be submitted for notarization?
END_OF_DOCUMENT_TOKEN_TO_BE_REPLACED

A popular image processing library has a vulnerability that can cause denial of service by a maliciously-crafted file causing the application to consume too much memory. Should you upgrade or is there another solution?
END_OF_DOCUMENT_TOKEN_TO_BE_REPLACED

The App Store Small Business Program offers lowered commission cost with one big caveat: no app transfer. But apps graduating from a "hobby" into a "small business" would definitely involve transferring ownership. Read how to transfer apps without engaging in the app transfer process and losing out on the program's benefits.
END_OF_DOCUMENT_TOKEN_TO_BE_REPLACED

Compiled code can conclude the instruction set through conditional compilation. But what about processor-independent scripts? Finding out the current native processor architecture and emulation status thereof would be very useful in build systems that doesn't support cross-compilations. Find out how a shell script can find out whether it is running under Apple's processor, Intel, or emulated.
END_OF_DOCUMENT_TOKEN_TO_BE_REPLACED

Being in the "bleeding edge" has its drawbacks in addition to benefits. Blazing a fresh trail means it's more rough and plenty of unknowns. Similarly in open source software, support for the ARM architecture is slim and even slimmer on the Mac. But there is a way to run "legacy" Intel-only command line apps on the Mac.
END_OF_DOCUMENT_TOKEN_TO_BE_REPLACED

Distributing macOS apps as ZIP archives has been quaint since Sierra. Today’s macOS packaging requirements mandates notarization, otherwise it would say that your app is suspicious. This often means distributing apps within disk images since this container format can be signed, notarized, and stapled.
END_OF_DOCUMENT_TOKEN_TO_BE_REPLACED

Publishing similar apps is considered spamming. Yet there are valid reasons to develop multiple apps from the same code base. Here is what you need to know to avoid being labeled as spammer by app reviewers.
END_OF_DOCUMENT_TOKEN_TO_BE_REPLACED

Some developers' app updates were rejected from the App Store because their apps look similar. Worse, some others were marked as spammer due to publishing apps that looks like another developer's app. How can you avoid this?
END_OF_DOCUMENT_TOKEN_TO_BE_REPLACED