Job Security by Levels of Abstractions or Indirections

Hate abstractions? Fed up with indirections? Tame your tempers, grasshopper. These idioms may well be the thing that provides you with a job and keeps you and your bosses employed. 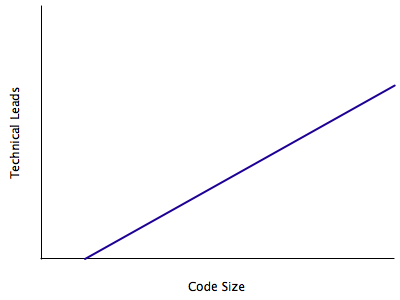 Some say meta-abstractions are meaningless. Little do they realize that this is a wonderful pattern to foster job security among developers and provides opportunities for code jockeys to rise up the ranks.

Why? Abstractions creates indirections which in turn increases source code size. More code can also mean more people are needed to manage it. There will be more opportunities for senior developers to mentor junior developers or new joiners on how to program each level in the indirection. Indirections also act like little picket fences that defines the boundaries of each technical lead who manages code within each level, making it easier to demarcate who-does-what in a project that typically cross-cut abstraction levels.

Put simply, meta abstraction is abstraction of abstraction which in itself may be an abstraction. Confused? Perhaps some code will help. The following pseudocode is inspired by Joel Spolski’s example of meta-abstraction:

Still not familiar? How about this example:

More familiar? Good. Not familiar? If you’ve ever been a software engineer, consider yourself lucky.

As you can see for yourself, the levels of indirection in the above examples are overwhelmingly deep. This a recurring theme in enterprise applications. Typically within each level of indirection there will be a source file that defines the interface and another source file that contains its implementation. There could be even more than that for cases like supporting multiple implementations, remoting, and other bits and bobs.

Technical Leadership by Levels of Indirection

What I meant by technical leadership are people who manage code. These people usually have titles like technical leads, principal developers or architects. It doesn’t mean having some kind of leading-edge technology.

In some technology companies, technical leaderships are enforced by commit locks on source files. That is, approval by a code manager is needed to commit changes to a source file that he/she manages. In turn the technical lead reviews the changes before allowing it to be part of the main product that will eventually be released. As you can see for yourself, the number of leads is limited by the number of lockable files that he/she can be assigned to review.

What to do when you need to make room for people to get promoted? One possible way is to increase the number of files — junior technical leads will get a set of less important files that are not frequently changed whereas more senior leads will guard “hotter” files that often need modifications. That way the senior lead also has the visibility and authority to split those files and promote more junior leads to take care of them (which in the process also increase that his/her own rank in the pecking order). This way, technical people can remain technical while still getting timely promotions and have a sense of progress within the company.

Imagine that the code base is the territorial area of a monarchy. Territories are awarded to dukes to rule and maintain their loyalty to the monarchy. When the monarchy expands, new territories are awarded to people as reward for their services and that’s how new dukes are appointed. Likewise when a territory becomes too large or too developed for a duke to manage (and by extension did a poor job of ruling the duchy), it can be split among two or more dukes. During those days, there were a lot of unruled land areas and thus it’s easier to apply this method of expansion.

It May Not Work in Your Company

One caveat though: this pattern will only likely to work in a MegaCorp that only have one (or a small number of) flagship products. Like for example a large product-based software company or a large dot-com. It will unlikely work in banks, government offices, or even consulting-based software companies. As expected, you need to be in the engineering unit that takes care of that primary product to feel the effect.

Why? Because the code base will need to be large and complex enough for this kind of commit-locks to work. When the company have multiple products and the source files of each product are not interdependent, higher management may as well assign one person to handle code reviews for the entire product. In effect each product is small enough to become a duchy in itself and the small “surface-area” doesn’t provide much room for developers to become code managers.

0 thoughts on “Job Security by Levels of Abstractions or Indirections”

My latest guest post for Waldo shows you how to use SQLite databases using Swift through Gus Muller’s FMDB library.   Head to Waldo for the article: Getting Started with FMDB and Swift: A Guide.   Avoid Delays and Rejections when Submitting Your App to The Store! Follow my FREE cheat sheets to design, develop,…
END_OF_DOCUMENT_TOKEN_TO_BE_REPLACED

Comparing SwiftUI with storyboards for iOS development - which one is better when.
END_OF_DOCUMENT_TOKEN_TO_BE_REPLACED

Check out my latest guest post at Waldo: How to Create an iOS App ID: 2 Quick and Easy Methods. You will learn: What an App ID is in Apple’s ecosystems. How to create App IDs. What is an App Store ID and how it relates to an App ID. How to find an App…
END_OF_DOCUMENT_TOKEN_TO_BE_REPLACED

By default, Xcode Server signs binaries using a development certificate, not a distribution one. Unfortunately there is no built-in option to make it use a Developer ID certificate. What's the solution?
END_OF_DOCUMENT_TOKEN_TO_BE_REPLACED

Notarization is a fully automated process, unlike going through the App Store which involves manual human review. At least it's automated in Apple's side. However it could consume a non-negligible amount of brain bandwidth in your side. How about automating it?
END_OF_DOCUMENT_TOKEN_TO_BE_REPLACED

Continuous testing is paramount to ship serous software. Yet continuously running tests is a pensive productivity plight. Is it possible to automate testing? Yes you can.
END_OF_DOCUMENT_TOKEN_TO_BE_REPLACED

Xcode 13 brought a new notarization tool. What is it and how much better compared to the old one?
END_OF_DOCUMENT_TOKEN_TO_BE_REPLACED

“I want a REST API for notarization since it’s impossible to parse text coming from the notarization tool reliably.” What if I say that the command line API is the best method for integration with build pipelines? Read on to find out more.
END_OF_DOCUMENT_TOKEN_TO_BE_REPLACED

Notarization may take just a few clicks in Xcode, but this takes time and a security risk. You include notarization as part of your continuous delivery pipeline. Here's how.
END_OF_DOCUMENT_TOKEN_TO_BE_REPLACED

Distributing binaries for macOS outside the App Store requires registering it with Apple beforehand—notarizing it. But do you know what can be submitted for notarization?
END_OF_DOCUMENT_TOKEN_TO_BE_REPLACED

A popular image processing library has a vulnerability that can cause denial of service by a maliciously-crafted file causing the application to consume too much memory. Should you upgrade or is there another solution?
END_OF_DOCUMENT_TOKEN_TO_BE_REPLACED

The App Store Small Business Program offers lowered commission cost with one big caveat: no app transfer. But apps graduating from a "hobby" into a "small business" would definitely involve transferring ownership. Read how to transfer apps without engaging in the app transfer process and losing out on the program's benefits.
END_OF_DOCUMENT_TOKEN_TO_BE_REPLACED

Compiled code can conclude the instruction set through conditional compilation. But what about processor-independent scripts? Finding out the current native processor architecture and emulation status thereof would be very useful in build systems that doesn't support cross-compilations. Find out how a shell script can find out whether it is running under Apple's processor, Intel, or emulated.
END_OF_DOCUMENT_TOKEN_TO_BE_REPLACED

Being in the "bleeding edge" has its drawbacks in addition to benefits. Blazing a fresh trail means it's more rough and plenty of unknowns. Similarly in open source software, support for the ARM architecture is slim and even slimmer on the Mac. But there is a way to run "legacy" Intel-only command line apps on the Mac.
END_OF_DOCUMENT_TOKEN_TO_BE_REPLACED

Distributing macOS apps as ZIP archives has been quaint since Sierra. Today’s macOS packaging requirements mandates notarization, otherwise it would say that your app is suspicious. This often means distributing apps within disk images since this container format can be signed, notarized, and stapled.
END_OF_DOCUMENT_TOKEN_TO_BE_REPLACED

Publishing similar apps is considered spamming. Yet there are valid reasons to develop multiple apps from the same code base. Here is what you need to know to avoid being labeled as spammer by app reviewers.
END_OF_DOCUMENT_TOKEN_TO_BE_REPLACED

Some developers' app updates were rejected from the App Store because their apps look similar. Worse, some others were marked as spammer due to publishing apps that looks like another developer's app. How can you avoid this?
END_OF_DOCUMENT_TOKEN_TO_BE_REPLACED