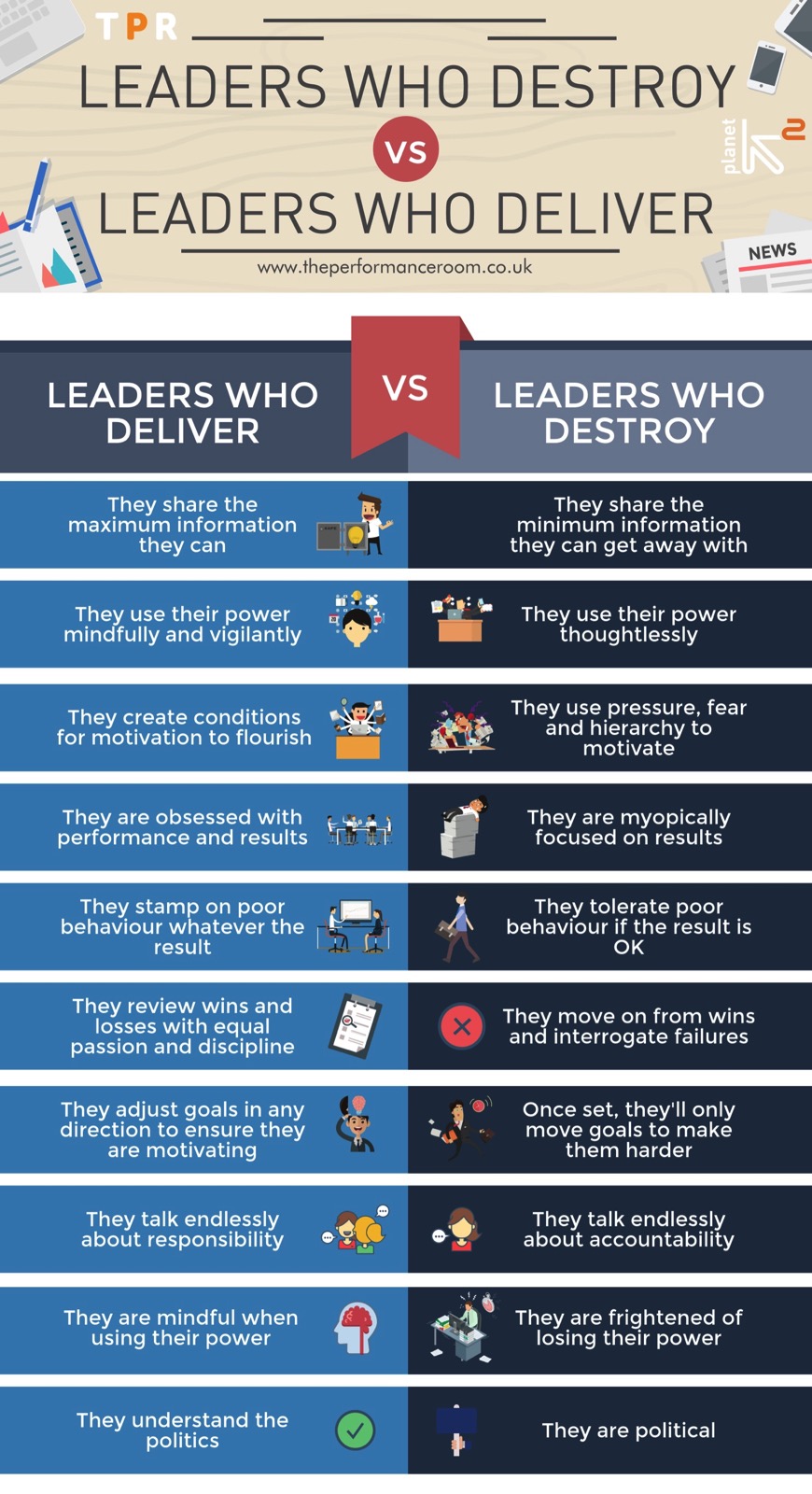 Leaders who destroy are political and myopically focused on results. They use pressure, fear, and hierarchy to motivate.

“Fear will keep the local systems in line”
— Governor Tarkin

I’ve just found a nice infographic from The Performance Room: Leaders who Destroy vs Leaders Who Deliver. This reminds me of the “results-based” obsession and culture that sometimes lead to un-sustainability and gross externalization.

Two items from the infographic struck my heart about leaders who destroy:

Those remind me of a story that a professor told when I attended his Financial Management class for MBA.

Once upon a time there was an operator of a milling machine. He operated his machine at near 100% capacity with almost no downtime. Whereas his colleagues operated their respective machines at around 70%-80% capacity to allow for downtime and maintenance. His production soared through the roof. Upper Management was pleased and then he got promoted to foreman. Then another guy was promoted to an operator to take his place and run his machine. A few months in the job, the New Operator’s machine fell apart due to its previous operator almost didn’t maintain it and ran it to capacity. To cover his tracks, the New Foreman fired the New Operator who “broke the machine”.

This reminds me of the “myopically focused on results” row in the graphic below. Both Upper Management and the New Foreman were both obsessed with results. Moreover the New Foreman is very apt in politics and quickly made a scapegoat out of the New Operator to cover his less-than-stellar former practice.

Moreover being “myopically focused on results” is also an example of gross externalization. The New Foreman was focusing on getting that promotion at any cost as long as he’s not paying for it. Just like how we are polluting the environment to the max just because we’re not paying for it (yet). My professor was wise to tell the story in a finance class, because these externalized costs are not likely to show in balance sheets or financial projections — but they exists nevertheless and are essentially invisible debts.

My latest guest post for Waldo shows you how to use SQLite databases using Swift through Gus Muller’s FMDB library.   Head to Waldo for the article: Getting Started with FMDB and Swift: A Guide.   Avoid Delays and Rejections when Submitting Your App to The Store! Follow my FREE cheat sheets to design, develop,…
END_OF_DOCUMENT_TOKEN_TO_BE_REPLACED

Comparing SwiftUI with storyboards for iOS development - which one is better when.
END_OF_DOCUMENT_TOKEN_TO_BE_REPLACED

Check out my latest guest post at Waldo: How to Create an iOS App ID: 2 Quick and Easy Methods. You will learn: What an App ID is in Apple’s ecosystems. How to create App IDs. What is an App Store ID and how it relates to an App ID. How to find an App…
END_OF_DOCUMENT_TOKEN_TO_BE_REPLACED

By default, Xcode Server signs binaries using a development certificate, not a distribution one. Unfortunately there is no built-in option to make it use a Developer ID certificate. What's the solution?
END_OF_DOCUMENT_TOKEN_TO_BE_REPLACED

Notarization is a fully automated process, unlike going through the App Store which involves manual human review. At least it's automated in Apple's side. However it could consume a non-negligible amount of brain bandwidth in your side. How about automating it?
END_OF_DOCUMENT_TOKEN_TO_BE_REPLACED

Continuous testing is paramount to ship serous software. Yet continuously running tests is a pensive productivity plight. Is it possible to automate testing? Yes you can.
END_OF_DOCUMENT_TOKEN_TO_BE_REPLACED

Xcode 13 brought a new notarization tool. What is it and how much better compared to the old one?
END_OF_DOCUMENT_TOKEN_TO_BE_REPLACED

“I want a REST API for notarization since it’s impossible to parse text coming from the notarization tool reliably.” What if I say that the command line API is the best method for integration with build pipelines? Read on to find out more.
END_OF_DOCUMENT_TOKEN_TO_BE_REPLACED

Notarization may take just a few clicks in Xcode, but this takes time and a security risk. You include notarization as part of your continuous delivery pipeline. Here's how.
END_OF_DOCUMENT_TOKEN_TO_BE_REPLACED

Distributing binaries for macOS outside the App Store requires registering it with Apple beforehand—notarizing it. But do you know what can be submitted for notarization?
END_OF_DOCUMENT_TOKEN_TO_BE_REPLACED

A popular image processing library has a vulnerability that can cause denial of service by a maliciously-crafted file causing the application to consume too much memory. Should you upgrade or is there another solution?
END_OF_DOCUMENT_TOKEN_TO_BE_REPLACED

The App Store Small Business Program offers lowered commission cost with one big caveat: no app transfer. But apps graduating from a "hobby" into a "small business" would definitely involve transferring ownership. Read how to transfer apps without engaging in the app transfer process and losing out on the program's benefits.
END_OF_DOCUMENT_TOKEN_TO_BE_REPLACED

Compiled code can conclude the instruction set through conditional compilation. But what about processor-independent scripts? Finding out the current native processor architecture and emulation status thereof would be very useful in build systems that doesn't support cross-compilations. Find out how a shell script can find out whether it is running under Apple's processor, Intel, or emulated.
END_OF_DOCUMENT_TOKEN_TO_BE_REPLACED

Being in the "bleeding edge" has its drawbacks in addition to benefits. Blazing a fresh trail means it's more rough and plenty of unknowns. Similarly in open source software, support for the ARM architecture is slim and even slimmer on the Mac. But there is a way to run "legacy" Intel-only command line apps on the Mac.
END_OF_DOCUMENT_TOKEN_TO_BE_REPLACED

Distributing macOS apps as ZIP archives has been quaint since Sierra. Today’s macOS packaging requirements mandates notarization, otherwise it would say that your app is suspicious. This often means distributing apps within disk images since this container format can be signed, notarized, and stapled.
END_OF_DOCUMENT_TOKEN_TO_BE_REPLACED

Publishing similar apps is considered spamming. Yet there are valid reasons to develop multiple apps from the same code base. Here is what you need to know to avoid being labeled as spammer by app reviewers.
END_OF_DOCUMENT_TOKEN_TO_BE_REPLACED

Some developers' app updates were rejected from the App Store because their apps look similar. Worse, some others were marked as spammer due to publishing apps that looks like another developer's app. How can you avoid this?
END_OF_DOCUMENT_TOKEN_TO_BE_REPLACED