Here is how you can become a “knowledgeable investor” as according to the Monetary Authority of Singapore. You can also apply the same underlying principle of this trick to minimally meet a government regulation.

It looks like there is a way to escape the new MAS regulation and become a “knowledgeable investor” — at least as according to MAS. The new rule will take effect starting on 1 Jan 2012 and thus I have about three months to make six purchases or switches before then. So now comes the question: which fund to buy? Should I get a new one or make additional purchases of the same funds in my portfolio? Should I switch the money around?

In my previous blog post on this issue I received a suggestion to switch S$100 six times to so that I can automatically pass the Customer Knowledge Assessment test. However, switches makes it more difficult for me to track each fund’s performance over time. Not to metion the involuntary switch I had back in 2008 when ABN AMRO sold their funds to BNP Paribas. Furthermore, a lot of my funds’ minimum sale price is significantly greater than S$100, which makes these switches non-negligible.

Here are the funds I have in Fundsupermart right now. Almost all of my investments are there, except for a (now small) portion that I have in Manulife Indonesia. As you can see for yourself, my investments haven’t really recover from the 2008 bust, despite that I made the majority of purchases at that time (and haven’t been buying any more since then). 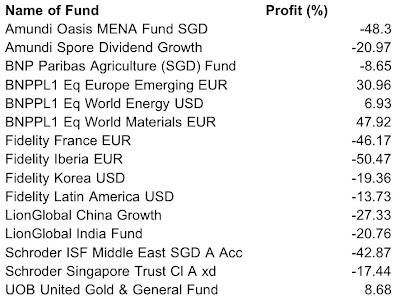 From the table above you can see that I have three funds that are beginning to turn a profit. These could be good candidates for additional re-investment. The rest doesn’t break even after almost three years. After all, why should I add more money into funds that couldn’t recover after three years out of US financial meltdown? Not to mention that none of those funds specifically invests in the US. As the saying goes back home, the rice have become porridge — I still have hopes that they can turnaround somehow and don’t have any plans to liquidate those positions within the next five years, but it is quite clear that those funds aren’t performing well.
Since I already have a number of losing funds in Europe, probably I should avoid the European fund for the time being, even though it is beginning to turn around. Not to mention that the European Union looks like they’re being too generous in bailing out their bankrupt members.
So that leaves these two funds — probably I should take a look deeper and see what makes them tick.

BNPPL1 Eq World Materials EUR invests in commodity companies. That is, the typical brick-and-mortar old-school factories that manufactures raw materials into semi-finished goods for other industries to use. Examples are steel, glass, paper, and industrial chemicals. These are the types of companies that have been around since industrial revolution and yes, the growth for these are supposed to be slow. Furthermore they’re also not immune to the 2008 crisis, as shown in their NAV evolution below:

If you’re a treehugger you might protest, “You’re destroying the environment by investing on heavy industries!”. Assuming that you’re reading this on a computer, wearing clothes, and still have a roof over your head, please be aware that these industries help make those stuff that you use. A computer needs silicone, gold, copper, etc to make thus somebody needs to either mine or recycle and purify these stuff.
Another faintly amusing thing to note is that this fund’s management believes that they have outperformed their benchmark but didn’t place the benchmark anywhere inside their fact sheet. Not displaying the benchmark makes it harder for potential investors to quickly evaluate their performance. Another instance of confusopoly in action, at least that is what I think of it.

UNITED GOLD & GENERAL FUND is a more specialized variant to BNP Paribas’ World Materials Fund. They invest primarily in companies that mine gold, silver, and other precious metals.
Personally I don’t really think gold as precious in itself — it is yet another medium of exchange in my point of view. But even so gold makes a good conductor and thus needed to make computers and other electronics. So gold does have some intrinsic value apart from being an alternative currency. 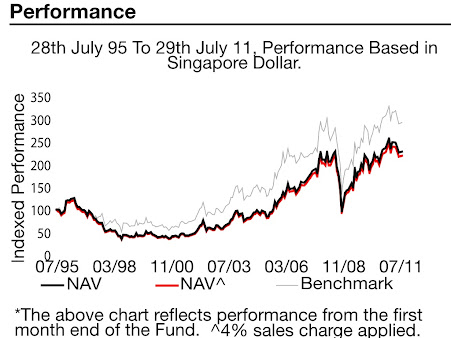 The fund have been consistently underperforming its own benchmark, which is quite strange really. Makes me wonder why Fundsupermart isn’t offering a cheaper indexed fund that is passively managed and just track the Financial Times Gold Mines Index.
Apparently underperforming is pretty common in gold companies fund sold in Fundsupermart. Schroder’s gold fund also underperforms its own benchmark whereas DWS Sharia’s Precious Metal fund looks like they are too shy to include a benchmark in its fact sheet. Along with UOB’s, those are just about all of this type of funds offered in Fundsupermart.

Then I think to myself, why not invest in new funds? Looking at the best 10-year returns in Fundsupermart shows that primarily Thailand and Indonesia stock markets are providing good returns. The list changes quite a bit over the past two weeks, but it looks like funds investing in Indonesia and Thailand funds seem to pop up. Moreover, the ones managed by Aberdeen looks to be consistently present in the list.

Originally I feel that I shouldn’t invest in Indonesian funds any more since I already have a significant amount of money invested in Manulife Indonesia. Then I realized that Aberdeen’s management fee is significantly lower than Manulife’s — that is, 1.5% against 2.5%. Probably I should give Aberdeen another look. You might ask, why did I invested in Manulife originally? Because that’s the best one I could get at that time, when I was working in Indonesia and earning IDR. 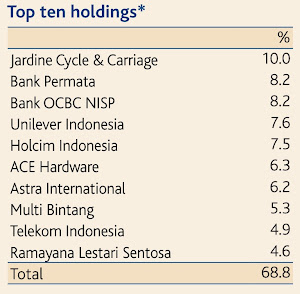 An interesting thing to note is that Aberdeen Indonesia Equity doesn’t always invests in Indonesian stocks (i.e., those that are traded in the Jakarta Stock Exchange). The last time I check that they have 10% investment in Jardine Cycle & Carriage. Yes, Jardine have significant investments in Astra International and may derive a significant portion of its revenue from Indonesia, but I find it odd since Jardine isn’t publicly traded in JSX. Not to mention that the prospectus, section 9.1.2 says “The Aberdeen Indonesia Equity Fund aims to provide Holders with medium to long-term capital growth from a portfolio of Indonesian equities.” Is it a deviation from their prospectus? Or that they loosely define “equities” to also include the over-the-counter variants (that is, not just public companies)? Do they also loosely interpret Indonesian to mean “having any relationship with Indonesia, however remote and far-fetched that relationship may be, and includes having Indonesian employees”? Heck, if the last part is true then any company can hire an Indonesian janitor to make it qualified to be “Indonesian” ?

Despite its lax adherence to its own prospectus, it looks like Aberdeen have consistently beaten the Jakarta Stock Exchange (JSX) index since 1997. Although funds that bend its prospectus may as well likely to bend its own fact sheet and inflate its own self-reported performance. 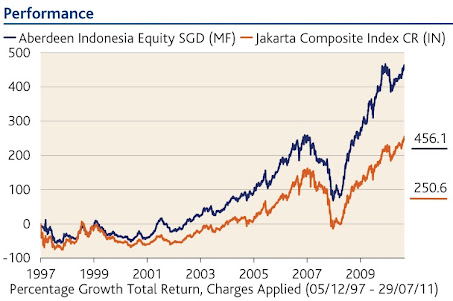 Most of the time Aberdeen Thailand Equity was on par with its benchmark. That is, the fund’s self-reported performance closely matches Thailand’s stock exchange index. The fund somewhat outperformed the index during 2005-2010 and have never yielded a return below the index. At a management fee of 1.5%, probably you would be better off buying an index fund instead. 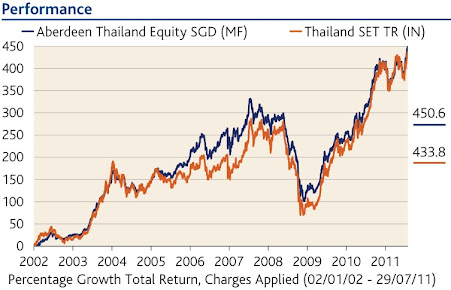 When it comes to Thai equities, looks like LionGlobal Thailand is the winner here. Most of the time they had higher returns than the Thai Index, although they roughly match the index from 1999-2003. They do had a rough dip during the 2008 crash, but for investors that weathered the storm, they have recovered and bring in more returns from 2010. One caveat is that they are heavy in the financial sector with about 35% invested. But hopefully Thai banks aren’t as deep in derivatives as their counterparts in the western world. 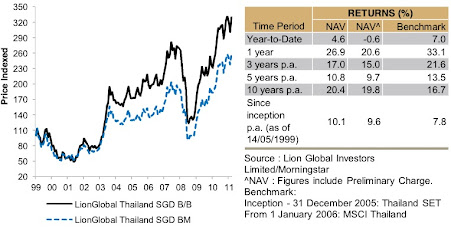 So in conclusion, what will be my next step? Likely I’ll go with Aberdeen Indonesia and LionGlobal Thailand for the time being, easing in my investments to maximize the number of transactions so that I can meet the new MAS regulation of six transactions before 2012. Furthermore I’ll prpbably divest from the gold fund since it’s quite clear that the management fee doesn’t add value to the fund.

One thought on “Becoming a Knowledgeable Investor”