Coverage on the iOS Dev Scout event on March 2012 with my commentaries. The primary topics were iOS in-app purchasing and test-driven development.

Subhransu Behera was very persistent in inviting me to his iOS Dev Scout events in HackerSpace.sg — his fourth invite convinced me to come and see what it was all about. Personally my reason of coming was to network, mingle, and generally “show up”, which I haven’t been doing much lately. Not to mention that I’m a poor networker. 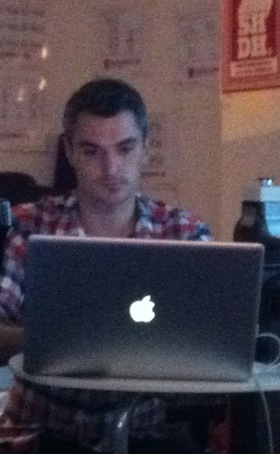 Michael Del Borello put together a nice-looking presentation about how to use StoreKit on iOS, Apple’s primary interface for enabling additional application functionality that requires payment. It was quite apparent that programming StoreKit requires writing quite a bit amount of code and he also talked about this issue.

What’s strange is that Michael (del Borello) sound like he was unaware of Lodsys’ lawsuit spree where the patent troll sued a non-trivial number of small application developers that uses in-app purchase. He then notes that it’s a “good problem to have” – which on my opinion reflects either his experience in handling legal issues or merely he just being human and over-simplify stuff that he does not understand.

Reflecting from the difficulties of programming StoreKit, BonoboLabs publishes an open-source library for in-app purchasing. There wasn’t any existing open-source library that met their needs and thus the reason why they wrote yet another one. Michael promises that their library will:

Michael also passingly mention about a customer feedback UI widget that they’re writing. Essentially it’s a better version of Appirater that annoys many iOS users. Michael’s component only takes the user to the App Store if she said that she’s happy about the app, but instead asks for feedback when the user is less than delighted. The widget is meant to be tidily placed in the application’s settings screen. Unlike Appirater that abruptly interrupts the user’s workflow. It does sound like a nice application of psychology – don’t let the user rate the app when they are pissed by it. Unfortunately Michael didn’t point out any Github link to the project and I couldn’t find the project published in Bonobo’s Github account as of this writing. 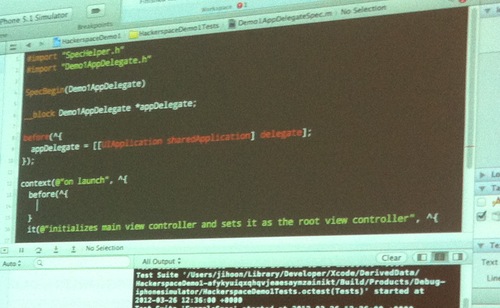 Peter Jihoon Kim wrote Specta as what looks like a domain-specific language for unit testing, implemented on top of Objective-C using a set of preprocessor macros. He argued that current breed of open-source Objective-C unit testing libraries (OCUnit, Cedar, Kiwi) are either too hard or too difficult to use and thus came up with his solution of a “test-specification language” of some sort that compiles down to Objective-C.

For one, these meta-languages adds unnecessary complexity. Sure it looks nice when everything works fine but if things break, it’s going to be so awful to debug; remember Joel Spolsky’s law of leaky abstractions. If you make a slight syntax error somewhere, the compiler won’t be able to point the exact problem for you since it knows nothing about the semantics of your “programming language” (i.e., a set of macros). I ran into this problem the first time on Borland C++ ObjectWindows library – a slight mistake on its dispatch table will spew out gobs and gobs of compiler errors. A more recent example was about two years ago when I played around with Objective-J (Cappuccino Web Framework), there was no syntax-highlighting and no compiler that can alert me of simple syntax errors (Cappuccino’s JavaScript preprocessor was unhelpful at the time), and I had a terribly tough time correlating the error messages that I get from the JavaScript interpreter back to my Objective-J code. Not to mention the daily havoc caused by leaky abstractions of XML-thingies that generates C++/Java code in my current dayjob (though I can’t talk much about those; closed-source framework and general corporate confidentiality).

The second issue is that polyglotic projects tend to be hard to maintain and support. At one part of my career I supported a rather Rube Goldberg of an application, written in a hodge-podge of Java Swing, Servlets, ASP, ASP.NET, Transact-SQL, and some kind of XML-based BPEL workflow engine. It wasn’t a hugely popular web application with millions of users, but an internal application used by a few hundred salespeople.

The networking session at the end of the talk was quite short. Probably because the event ended quite late in the night and a lot of people still need to go to their jobs tomorrow.About half of the 20-or-so audience looks like that they’re recent graduates. Probably most works as employees in early-stage companies or claims to be a “freelance consultant”. Only one other guy confirmed to have a dayjob at a MegaCorp.

I did met with Michael Cheng‘s school friend: Yong Sze Yuen Kelvin, who said to be a self-employed branding consultant. He prowessed about his knowledge of marketing. In retrospect his business is probably more brick-and-mortar since his website is un-SEO, being mostly images, and terribly difficult to type. Anyway he then talked about a class that he attended where the instructor hands out class assignment to design a “breakthrough” operating system. On the latter part he then commented that a lot of the interaction designs that came out actually inhibit interaction instead of facilitating it. He also cursed the difficulty of using the Facebook app and the UI wonders of the Path app.

Here are my LiveScribe notes taken in the event:

View this document on Scribd

Check out my latest guest post at Waldo: How to Create an iOS App ID: 2 Quick and Easy Methods. You will learn: What an App ID is in Apple’s ecosystems. How to create App IDs. What is an App Store ID and how it relates to an App ID. How to find an App…
END_OF_DOCUMENT_TOKEN_TO_BE_REPLACED

By default, Xcode Server signs binaries using a development certificate, not a distribution one. Unfortunately there is no built-in option to make it use a Developer ID certificate. What's the solution?
END_OF_DOCUMENT_TOKEN_TO_BE_REPLACED

Notarization is a fully automated process, unlike going through the App Store which involves manual human review. At least it's automated in Apple's side. However it could consume a non-negligible amount of brain bandwidth in your side. How about automating it?
END_OF_DOCUMENT_TOKEN_TO_BE_REPLACED

Continuous testing is paramount to ship serous software. Yet continuously running tests is a pensive productivity plight. Is it possible to automate testing? Yes you can.
END_OF_DOCUMENT_TOKEN_TO_BE_REPLACED

Xcode 13 brought a new notarization tool. What is it and how much better compared to the old one?
END_OF_DOCUMENT_TOKEN_TO_BE_REPLACED

“I want a REST API for notarization since it’s impossible to parse text coming from the notarization tool reliably.” What if I say that the command line API is the best method for integration with build pipelines? Read on to find out more.
END_OF_DOCUMENT_TOKEN_TO_BE_REPLACED

Notarization may take just a few clicks in Xcode, but this takes time and a security risk. You include notarization as part of your continuous delivery pipeline. Here's how.
END_OF_DOCUMENT_TOKEN_TO_BE_REPLACED

Distributing binaries for macOS outside the App Store requires registering it with Apple beforehand—notarizing it. But do you know what can be submitted for notarization?
END_OF_DOCUMENT_TOKEN_TO_BE_REPLACED

A popular image processing library has a vulnerability that can cause denial of service by a maliciously-crafted file causing the application to consume too much memory. Should you upgrade or is there another solution?
END_OF_DOCUMENT_TOKEN_TO_BE_REPLACED

The App Store Small Business Program offers lowered commission cost with one big caveat: no app transfer. But apps graduating from a "hobby" into a "small business" would definitely involve transferring ownership. Read how to transfer apps without engaging in the app transfer process and losing out on the program's benefits.
END_OF_DOCUMENT_TOKEN_TO_BE_REPLACED

Compiled code can conclude the instruction set through conditional compilation. But what about processor-independent scripts? Finding out the current native processor architecture and emulation status thereof would be very useful in build systems that doesn't support cross-compilations. Find out how a shell script can find out whether it is running under Apple's processor, Intel, or emulated.
END_OF_DOCUMENT_TOKEN_TO_BE_REPLACED

Being in the "bleeding edge" has its drawbacks in addition to benefits. Blazing a fresh trail means it's more rough and plenty of unknowns. Similarly in open source software, support for the ARM architecture is slim and even slimmer on the Mac. But there is a way to run "legacy" Intel-only command line apps on the Mac.
END_OF_DOCUMENT_TOKEN_TO_BE_REPLACED

Distributing macOS apps as ZIP archives has been quaint since Sierra. Today’s macOS packaging requirements mandates notarization, otherwise it would say that your app is suspicious. This often means distributing apps within disk images since this container format can be signed, notarized, and stapled.
END_OF_DOCUMENT_TOKEN_TO_BE_REPLACED

Publishing similar apps is considered spamming. Yet there are valid reasons to develop multiple apps from the same code base. Here is what you need to know to avoid being labeled as spammer by app reviewers.
END_OF_DOCUMENT_TOKEN_TO_BE_REPLACED

Some developers' app updates were rejected from the App Store because their apps look similar. Worse, some others were marked as spammer due to publishing apps that looks like another developer's app. How can you avoid this?
END_OF_DOCUMENT_TOKEN_TO_BE_REPLACED

It would be a big blow when Apple rejects your suite of apps, call it "spam" and tell you to move into a container app. If this is happening to you, then this article would be a solution to your predicament.
END_OF_DOCUMENT_TOKEN_TO_BE_REPLACED

Some people probably wouldn't have found success through social media. Learn the importance to present your best self in social media and how to do it.
END_OF_DOCUMENT_TOKEN_TO_BE_REPLACED