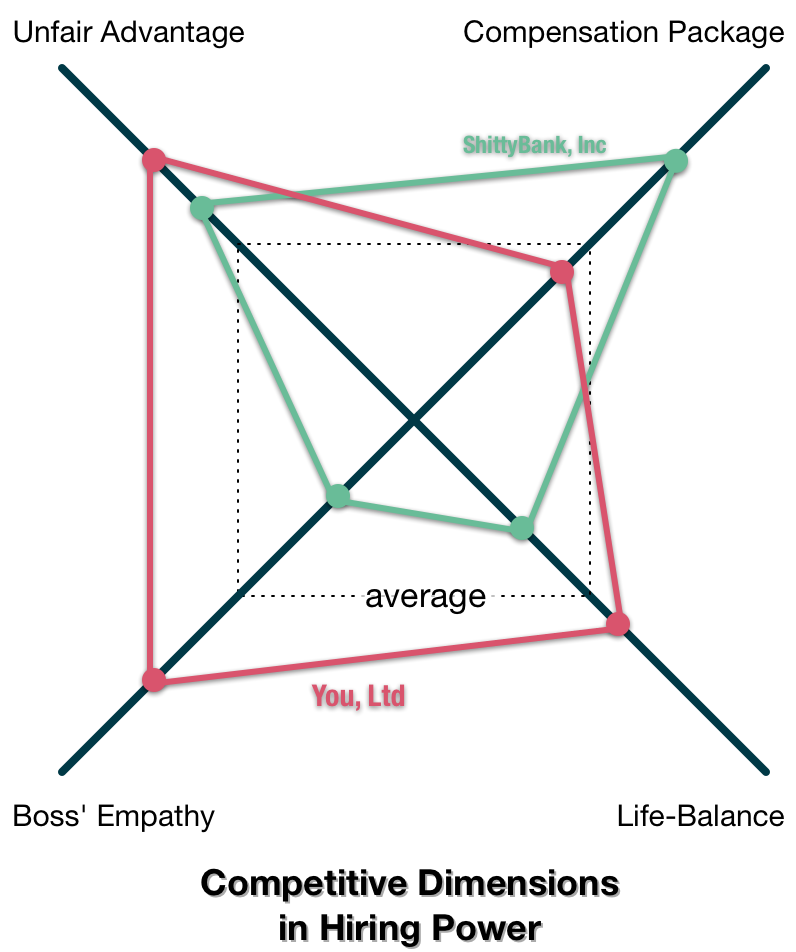 If you’re running a startup and wanting to hire star performers for your company, you should know how to compete with the hiring power of large established companies that many good talents are drawn to. Likewise if you’re a recruiting agent and have a startup as your client, don’t repeat the same mistakes that hundreds of headhunters do every day. Say you’re a startup founder or working for a startup and tasked to hire new employees. You’ve searched high and low for good people to work for you, exhausted your Monster résumé collection and tried scavenging LinkedIn, Google+, and even Facebook but you couldn’t find the high-quality engineers that you need for your venture. Sights of despair are glimmering. Then what?

Lets face it, working in startups as an employee has many downsides in addition to the usual downsides of any job. These are among those “extra” downsides:

To make things worse, headhunters are often even more clueless about these downsides when promoting their vacancies. Here is an excerpt of one message I received recently – name concealed to protect the guilty.

Dear Sasmito, I am a technologist recruiter at XXXXX. I have an important position for a Senior iOS Developer in an exciting and highly successful social media firm in Singapore that has the leadership of Silicon Valley veterans and the financial backing of private global investors and the Singaporean government. This is a unique position that will see you creating a brand new social media platform that will connect its 16 million+ users globally. If this is something you would like more information on, I will be keen to share more details. I look forward to hearing from you.

Granted this e-mail doesn’t explicitly say “startup” – but to someone who regularly receives these recruiter pitches, it’s clearly visible that the vacancy is not coming from an established company. This recruiter even writes subjective superlatives like “exciting and highly successful” and “has the leadership of Silicon Valley … financial backing of government …” without quoting anything verifiable.

You should also see that the above e-mail doesn’t say anything that touches any of the three concerns I’ve said earlier. As Amy Hoy put it, startups are one long con – experienced engineers aren’t likely to fall to that trick again (because being experienced means that they’ve probably have been gullible before).

Then how can you attract good-skilled people to your startup? For a start, you’ll need to address the downsides of working for a startup. That should cover the hygiene part (of Frederick Herzberg’s motivation-hygiene theory). Then you should work on your unfair advantage, which will entice people to work for you (this is the motivation part of Herzberg’s theory).

Let me show you a framework how you can compete for employees with MegaCorps. Consider these four factors:

You can plot the above four factors on a plane to gauge your position relative to your competitors. This is a radar chart of four dimensions with each dimension representing one of the competitive factors listed above. You mark a point in the middle of each dimension line as “average”. Going outwards of those “average” marks means that it is “above average” and inwards means that the factor is “below average”.

Then you draw your estimate of how each of your competitors fares in each factor. Plotting a large publicly-traded MegaCorp is easier since there is plenty of publicly-available data that you can find about such company. Then you need to plot your own company and see how it fares against your competitors in terms of hiring power.

In the example diagram I’ve provided a hypothetical large bank that I call ShittyBank. Being a financial company, they can afford to pay their employees at significantly above market rate, as shown by the “Compensation Package” axis in the diagram. However ShittyBank is known to have a predatory culture and need to do a lot of busywork, hence the low rankings in the “Boss’ Empathy” and “Life-Balance” axes. Since they have access to a large pool of customers, they have an above-average “unfair advantage” that smaller banks cannot match (think engineers interested in data-mining or large-data problems – ShittyBank’s large customer base offers the big data that they need to play with).  Similarly, I plotted “You, Inc” as an example of how you can analyze yourself to compete against ShittyBank.

Then, you’ll say, what if you’re trying to get hired by a startup? For tips on this other side of the bargaining table, you can read Jason Cohen’s How to Convince a Startup to Hire You post.

My latest guest post for Waldo shows you how to use SQLite databases using Swift through Gus Muller’s FMDB library.   Head to Waldo for the article: Getting Started with FMDB and Swift: A Guide.   Avoid Delays and Rejections when Submitting Your App to The Store! Follow my FREE cheat sheets to design, develop,…
END_OF_DOCUMENT_TOKEN_TO_BE_REPLACED

Comparing SwiftUI with storyboards for iOS development - which one is better when.
END_OF_DOCUMENT_TOKEN_TO_BE_REPLACED

Check out my latest guest post at Waldo: How to Create an iOS App ID: 2 Quick and Easy Methods. You will learn: What an App ID is in Apple’s ecosystems. How to create App IDs. What is an App Store ID and how it relates to an App ID. How to find an App…
END_OF_DOCUMENT_TOKEN_TO_BE_REPLACED

By default, Xcode Server signs binaries using a development certificate, not a distribution one. Unfortunately there is no built-in option to make it use a Developer ID certificate. What's the solution?
END_OF_DOCUMENT_TOKEN_TO_BE_REPLACED

Notarization is a fully automated process, unlike going through the App Store which involves manual human review. At least it's automated in Apple's side. However it could consume a non-negligible amount of brain bandwidth in your side. How about automating it?
END_OF_DOCUMENT_TOKEN_TO_BE_REPLACED

Continuous testing is paramount to ship serous software. Yet continuously running tests is a pensive productivity plight. Is it possible to automate testing? Yes you can.
END_OF_DOCUMENT_TOKEN_TO_BE_REPLACED

Xcode 13 brought a new notarization tool. What is it and how much better compared to the old one?
END_OF_DOCUMENT_TOKEN_TO_BE_REPLACED

“I want a REST API for notarization since it’s impossible to parse text coming from the notarization tool reliably.” What if I say that the command line API is the best method for integration with build pipelines? Read on to find out more.
END_OF_DOCUMENT_TOKEN_TO_BE_REPLACED

Notarization may take just a few clicks in Xcode, but this takes time and a security risk. You include notarization as part of your continuous delivery pipeline. Here's how.
END_OF_DOCUMENT_TOKEN_TO_BE_REPLACED

Distributing binaries for macOS outside the App Store requires registering it with Apple beforehand—notarizing it. But do you know what can be submitted for notarization?
END_OF_DOCUMENT_TOKEN_TO_BE_REPLACED

A popular image processing library has a vulnerability that can cause denial of service by a maliciously-crafted file causing the application to consume too much memory. Should you upgrade or is there another solution?
END_OF_DOCUMENT_TOKEN_TO_BE_REPLACED

The App Store Small Business Program offers lowered commission cost with one big caveat: no app transfer. But apps graduating from a "hobby" into a "small business" would definitely involve transferring ownership. Read how to transfer apps without engaging in the app transfer process and losing out on the program's benefits.
END_OF_DOCUMENT_TOKEN_TO_BE_REPLACED

Compiled code can conclude the instruction set through conditional compilation. But what about processor-independent scripts? Finding out the current native processor architecture and emulation status thereof would be very useful in build systems that doesn't support cross-compilations. Find out how a shell script can find out whether it is running under Apple's processor, Intel, or emulated.
END_OF_DOCUMENT_TOKEN_TO_BE_REPLACED

Being in the "bleeding edge" has its drawbacks in addition to benefits. Blazing a fresh trail means it's more rough and plenty of unknowns. Similarly in open source software, support for the ARM architecture is slim and even slimmer on the Mac. But there is a way to run "legacy" Intel-only command line apps on the Mac.
END_OF_DOCUMENT_TOKEN_TO_BE_REPLACED

Distributing macOS apps as ZIP archives has been quaint since Sierra. Today’s macOS packaging requirements mandates notarization, otherwise it would say that your app is suspicious. This often means distributing apps within disk images since this container format can be signed, notarized, and stapled.
END_OF_DOCUMENT_TOKEN_TO_BE_REPLACED

Publishing similar apps is considered spamming. Yet there are valid reasons to develop multiple apps from the same code base. Here is what you need to know to avoid being labeled as spammer by app reviewers.
END_OF_DOCUMENT_TOKEN_TO_BE_REPLACED

Some developers' app updates were rejected from the App Store because their apps look similar. Worse, some others were marked as spammer due to publishing apps that looks like another developer's app. How can you avoid this?
END_OF_DOCUMENT_TOKEN_TO_BE_REPLACED