Faster Android Development on the Mac

Debugging on Android can be a pain at times – some of these can be attributed to the architecture of its developer tools. If you find the emulator’s startup time to be too slow for you, there may be a configuration option that you’ve overlooked and can make the emulator a lot fster.

One of my big gripes in developing for Android is the emulator’s long startup time. Coming from an iOS background it’s a huge setback since booting up the iOS simulator is just as fast as starting almost any other application – things work within three seconds on my two year old MacBook Air. Whereas it typically takes a few minutes for the Android emulator to do its thing and finally make my app available for debugging. Yes that being an emulator, it’s essentially a full-blown operating system on top of a hardware emulator. In contrast the iOS simulator is more like a special app launcher and runs simulated iOS apps as if they were native Mac apps.

Being a full-fledged virtualized hardware/software stack may be the primary reason for the Android emulator’s slowness. First it needs to virtualize an ARM processor and many related peripherals that a smartphone / PDA needs. On top of that it runs the Linux kernel. Then after that comes the Dalvik VM which is yet another hardware virtualizer (albeit there is no corresponding real-world microprocessor that executes the Dalvik instruction set). Thus there are two layers of chip-language translation involved: from x86 to ARM then to Dalvik.

If the above paragraph makes your head spin, consider this analogy. Suppose you only speak Mandarin and need to converse with someone who only speaks Spanish. You couldn’t find a Mandarin-to-Spanish translator and neither could the other person. Therefore you hired a Mandarin-to-English translator and similarly the other guy hired an English-to-Spanish translator. You talk to your translator using Mandarin whereas they talk to themselves using English and finally the other guy’s translator conveys the message in Spanish. As you can imagine, communication speeds goes slower than UN conferences. Your laptop’s processor is able to read the x86 instruction set (“Spanish”) whereas your Android app is written by the compiler in the Dalvik instruction set (“Mandarin”) and the two communicates via an intermediate ARM instruction set (“English”).

Coming from an iOS background, this double indirection of instruction sets and the slowness it entails is dismaying. Sure having a slower emulation speed that more matches the speed of the actual device may be useful at times if you need to fine tune your app’s performance. However for day-to-day debugging, faster turnaround times is always welcome & the emulator’s slowness isn’t much help in that respect.

Fortunately Intel have supplied a component that allows you to run Android code on the Mac in near-native speed. It’s a kernel extension that works in conjunction with the Atom/x86 variant of the Android system image & emulator. In essence you configure the Android Emulator to use a version of the Dalvik VM compiled for x86 (along with the rest of the Android OS stack) and then uses the kernel extension to execute many of the Intel-based Android OS instructions directly. The result is a lot faster emulator boot time (under a minute in my machine) and generally faster execution time. Extending the analogy, this is the Mandarin to Spanish translator that you’ve been looking for.

Open the Android SDK Manager and install these: 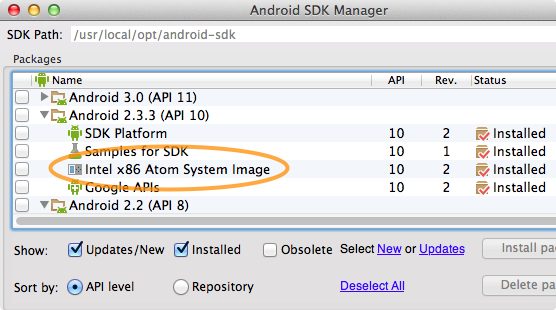 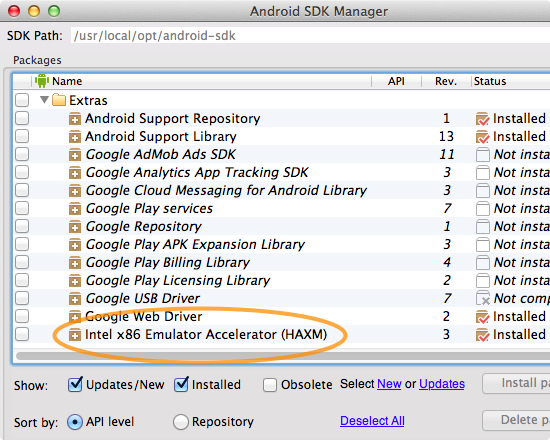 After all of those are installed, quit the Android SDK Manager (and Eclipse if you’re using it as your Android IDE) and then open Terminal. Go to folder  <sdk>/extras/intel/Hardware_Accelerated_Execution_Manager/ where <sdk> is where you place the Android SDK files.  I use homebrew to install Android SDK and my SDK location is in /usr/local/android-sdk/.  There should be a file named IntelHAXM.dmg there. To start installation simply type
$ open IntelHAXM.dmg
Then you should see the disk image mounted in Finder. There will be an installer file there, double click it and follow the on-screen instructions. Afterwards open the Android AVD Manager and configure an Android Virtual Device with the following options: 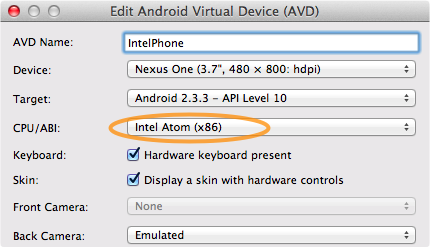 Then start the emulator as per normal. You should see “HAX is running” message in Eclipse’s LogCat view as part of the emulator’s startup. 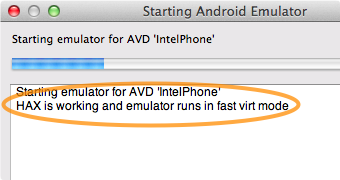 If you get “HAX is not working and emulator runs in emulation mode” message while starting the emulator, chances are the kernel extension is not installed or not running correctly. Intel HAXM requires VT support in your computer’s processors, but most recent Macs capable of running Mountain Lion should already have it. Try looking in the Mac’s System Information and verify that your processor is supported. Otherwise you can review the Android emulator guide for a more complete setup instruction and troubleshooting guide.

That’s all for now. Until next time!

2 thoughts on “Faster Android Development on the Mac”

My latest guest post for Waldo shows you how to use SQLite databases using Swift through Gus Muller’s FMDB library.   Head to Waldo for the article: Getting Started with FMDB and Swift: A Guide.   Avoid Delays and Rejections when Submitting Your App to The Store! Follow my FREE cheat sheets to design, develop,…
END_OF_DOCUMENT_TOKEN_TO_BE_REPLACED

Comparing SwiftUI with storyboards for iOS development - which one is better when.
END_OF_DOCUMENT_TOKEN_TO_BE_REPLACED

Check out my latest guest post at Waldo: How to Create an iOS App ID: 2 Quick and Easy Methods. You will learn: What an App ID is in Apple’s ecosystems. How to create App IDs. What is an App Store ID and how it relates to an App ID. How to find an App…
END_OF_DOCUMENT_TOKEN_TO_BE_REPLACED

By default, Xcode Server signs binaries using a development certificate, not a distribution one. Unfortunately there is no built-in option to make it use a Developer ID certificate. What's the solution?
END_OF_DOCUMENT_TOKEN_TO_BE_REPLACED

Notarization is a fully automated process, unlike going through the App Store which involves manual human review. At least it's automated in Apple's side. However it could consume a non-negligible amount of brain bandwidth in your side. How about automating it?
END_OF_DOCUMENT_TOKEN_TO_BE_REPLACED

Continuous testing is paramount to ship serous software. Yet continuously running tests is a pensive productivity plight. Is it possible to automate testing? Yes you can.
END_OF_DOCUMENT_TOKEN_TO_BE_REPLACED

Xcode 13 brought a new notarization tool. What is it and how much better compared to the old one?
END_OF_DOCUMENT_TOKEN_TO_BE_REPLACED

“I want a REST API for notarization since it’s impossible to parse text coming from the notarization tool reliably.” What if I say that the command line API is the best method for integration with build pipelines? Read on to find out more.
END_OF_DOCUMENT_TOKEN_TO_BE_REPLACED

Notarization may take just a few clicks in Xcode, but this takes time and a security risk. You include notarization as part of your continuous delivery pipeline. Here's how.
END_OF_DOCUMENT_TOKEN_TO_BE_REPLACED

Distributing binaries for macOS outside the App Store requires registering it with Apple beforehand—notarizing it. But do you know what can be submitted for notarization?
END_OF_DOCUMENT_TOKEN_TO_BE_REPLACED

A popular image processing library has a vulnerability that can cause denial of service by a maliciously-crafted file causing the application to consume too much memory. Should you upgrade or is there another solution?
END_OF_DOCUMENT_TOKEN_TO_BE_REPLACED

The App Store Small Business Program offers lowered commission cost with one big caveat: no app transfer. But apps graduating from a "hobby" into a "small business" would definitely involve transferring ownership. Read how to transfer apps without engaging in the app transfer process and losing out on the program's benefits.
END_OF_DOCUMENT_TOKEN_TO_BE_REPLACED

Compiled code can conclude the instruction set through conditional compilation. But what about processor-independent scripts? Finding out the current native processor architecture and emulation status thereof would be very useful in build systems that doesn't support cross-compilations. Find out how a shell script can find out whether it is running under Apple's processor, Intel, or emulated.
END_OF_DOCUMENT_TOKEN_TO_BE_REPLACED

Being in the "bleeding edge" has its drawbacks in addition to benefits. Blazing a fresh trail means it's more rough and plenty of unknowns. Similarly in open source software, support for the ARM architecture is slim and even slimmer on the Mac. But there is a way to run "legacy" Intel-only command line apps on the Mac.
END_OF_DOCUMENT_TOKEN_TO_BE_REPLACED

Distributing macOS apps as ZIP archives has been quaint since Sierra. Today’s macOS packaging requirements mandates notarization, otherwise it would say that your app is suspicious. This often means distributing apps within disk images since this container format can be signed, notarized, and stapled.
END_OF_DOCUMENT_TOKEN_TO_BE_REPLACED

Publishing similar apps is considered spamming. Yet there are valid reasons to develop multiple apps from the same code base. Here is what you need to know to avoid being labeled as spammer by app reviewers.
END_OF_DOCUMENT_TOKEN_TO_BE_REPLACED

Some developers' app updates were rejected from the App Store because their apps look similar. Worse, some others were marked as spammer due to publishing apps that looks like another developer's app. How can you avoid this?
END_OF_DOCUMENT_TOKEN_TO_BE_REPLACED