Here is a document class replacement for managing your library-style app based on Core Data. All the goodness of NSDocument / UIDocument with just the right functionalities when you don’t need to expose document-management functionality to your users. 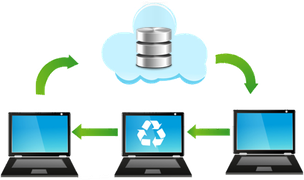 As I was developing Speech Timer 2, initially I used a document class to manage my Core Data stack – that is, UIManagedDocument on iOS and BSManagedDocument on OS X. Those two gets derived into one subclass and a preprocessor statement selects the right superclass at compile time. The reason for using those were primarily convenience: they both manage a Core Data stack and have similar APIs so that I can use one class to inherit from both of them with only minimal variations on the two platforms. Another reason was window management on the Mac – NSDocument has some fancy way to manage windows and NSWindowController objects already has a reference to its document – so that I don’t need to manage yet another reference to the core data stack, namely NSManagedObjectContext instance.

Things were nice until I tried adding in iCloud support. As of this writing, BSManagedDocument isn’t yet tested to incrementally sync a Core Data based document over iCloud. I’ve had some success in adding support for iCloud there but then hit a brick wall: first save of a document often fails with a "The file couldn’t be saved because you don’t have permission.” error. I was baffled.

This iCloud thing have been delaying the project for quite some time and I’ll need to fix it rather quick. Since I’m essentially re-implementing UIManagedDocument on the Mac, there may be some other things that the original class does that I need to emulate to get the two to sync. Stuff that I haven’t got much time to do.

Then I realized: Speech Timer is a library-style app. There is only one document, ever and the user doesn’t need to be presented with open/save dialogs and all the standard things that a document-based app do. The whole convenience of NSDocument s window management on the Mac is negated by the additional efforts I need to make. So I decided to rip out that document-based implementation and take the best bits of BSManagedDocument and bring it to both iOS and OS X.

Introducing BSCoreDataController: your Core Data stack manager for iOS and OS X. It’s loosely inspired by UIManagedDocument but pared down to its bare necessities for supporting a library-style app. Additionally there are a number of convenience functions to make iCloud easier to use by a Core Data app.

However it doesn’t have the document baggages that a library-style app doesn’t use: