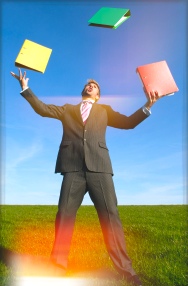 When you look into AppKit’s document architecture, you’ll see that although a document may be represented with more than one windows, the inverse is not true. There is only a setDocument: method in NSWindowController which implies that a window can only handle one document. Then, you may ask, what if you need one window to handle multiple documents? It would be convenient, for example, for client applications of some network service to support multiple server-side user accounts or even multiple services. Like for example a Twitter client that supports more than one account with each account’s data isolated from one another in its own data file.

Having a single window serving multiple documents isn’t so straightforward to do in Cocoa. But it is possible, if you are willing to override some of its document architecture mechanics. In fact that’s what I did and here’s how you can do it too.

What needs to be done

As I was scouring the web for an answer, I found a rough guide from CocoaDev. Being a collaboratively edited document, the article as I saw it then wasn’t very “clean” and has many rough spots so I’ll summarize it here for you:

How I did it

Here’s how I done multi-document windows in my current project, Scuttlebutt. This app is a Yammer client, which is somewhat similar to a Twitter or Facebook client but Yammer is geared more towards businesses and thus providing a secure online social network platform that is accessible only for employees of a company or organization.

One major feature of Scuttlebutt is support for multiple Yammer accounts – each Yammer account in Scuttlebutt maps into a document, having its own data bundle and Core Data persistence stack.  But users need to switch easily between accounts and just like any other “instant messaging” client, the user interface needs to be compact. Therefore Scuttlebutt only has one window handling multiple accounts and thus multiple document objects – looks pretty much like Twitterific or the official Twitter client.

All of the “special cases” for handling multiple documents are handled by the window controller and not the window class itself. The primary reason stems from the way the Document Architecture works: the setDocument: method is present in NSWindowController and not NSWindow.

The window controller maintains a set of document objects which are currently attached to the window. That is, all documents that the window has access to is kept in this set.

Likewise in removeDocument: the window controller removes the view controller before it unregisters it from the document. Lastly the document is removed from the set of documents which breaks the retain cycle.

Now that the window controller have addDocument: and removeDocument: methods, the inherited method setDocument: is no longer needed since managing the linkage to the document have moved to those former methods. Thus just override setDocument: to be a no-op.

Scuttlebutt has a notion of “current” document since there is only one document that can be “active” at a time. I reflect this by overriding the document method so that it returns the active document.

Lastly the each document needs to be detached from the window controller before the window closes. In addition, any references to those documents from any child view controllers will also need to be cleared in order to ensure a proper cleanup. The windowWillClose: method does just that. One caveat I found during debugging was that the window controller’s self pointer may become invalidated at any time within the method as soon as nothing else refers to it (I’m using ARC). Since we’re disconnecting references to documents, there have been cases where the window controller got deallocated mid-way of cleanup. To prevent that, I’ve added a strong pointer to self and use that pointer exclusively in the windowWillClose: method.

For Scuttlebutt’s case the document has a default view controller and it can create that if a window controller wants one.

In Scuttlebutt, the owner of window controllers is the application delegate. It listens for documents wanting a window and then assigns it to the window, auto-creating one as needed.

The document controller overrides method closeAllDocumentsWithDelegate: didCloseAllSelector: contextInfo: that drives closure of all documents (typically when the application quits), ensuring orderly teardown of multiple document-window connections. That is all windows are disconnected from each document before the document is closed.

So there you have it, a quick how-to on how to trick Cocoa’s document architecture so your application can handle multiple documents on a single window. Since in the app I’m working on doesn’t support user-controlled file load, save, or duplicate, there could be a few cases that I miss which requires special handling. So please share your experience in using these code snippets and let me know how it goes!

My latest guest post for Waldo shows you how to use SQLite databases using Swift through Gus Muller’s FMDB library.   Head to Waldo for the article: Getting Started with FMDB and Swift: A Guide.   Avoid Delays and Rejections when Submitting Your App to The Store! Follow my FREE cheat sheets to design, develop,…
END_OF_DOCUMENT_TOKEN_TO_BE_REPLACED

Comparing SwiftUI with storyboards for iOS development - which one is better when.
END_OF_DOCUMENT_TOKEN_TO_BE_REPLACED

Check out my latest guest post at Waldo: How to Create an iOS App ID: 2 Quick and Easy Methods. You will learn: What an App ID is in Apple’s ecosystems. How to create App IDs. What is an App Store ID and how it relates to an App ID. How to find an App…
END_OF_DOCUMENT_TOKEN_TO_BE_REPLACED

By default, Xcode Server signs binaries using a development certificate, not a distribution one. Unfortunately there is no built-in option to make it use a Developer ID certificate. What's the solution?
END_OF_DOCUMENT_TOKEN_TO_BE_REPLACED

Notarization is a fully automated process, unlike going through the App Store which involves manual human review. At least it's automated in Apple's side. However it could consume a non-negligible amount of brain bandwidth in your side. How about automating it?
END_OF_DOCUMENT_TOKEN_TO_BE_REPLACED

Continuous testing is paramount to ship serous software. Yet continuously running tests is a pensive productivity plight. Is it possible to automate testing? Yes you can.
END_OF_DOCUMENT_TOKEN_TO_BE_REPLACED

Xcode 13 brought a new notarization tool. What is it and how much better compared to the old one?
END_OF_DOCUMENT_TOKEN_TO_BE_REPLACED

“I want a REST API for notarization since it’s impossible to parse text coming from the notarization tool reliably.” What if I say that the command line API is the best method for integration with build pipelines? Read on to find out more.
END_OF_DOCUMENT_TOKEN_TO_BE_REPLACED

Notarization may take just a few clicks in Xcode, but this takes time and a security risk. You include notarization as part of your continuous delivery pipeline. Here's how.
END_OF_DOCUMENT_TOKEN_TO_BE_REPLACED

Distributing binaries for macOS outside the App Store requires registering it with Apple beforehand—notarizing it. But do you know what can be submitted for notarization?
END_OF_DOCUMENT_TOKEN_TO_BE_REPLACED

A popular image processing library has a vulnerability that can cause denial of service by a maliciously-crafted file causing the application to consume too much memory. Should you upgrade or is there another solution?
END_OF_DOCUMENT_TOKEN_TO_BE_REPLACED

The App Store Small Business Program offers lowered commission cost with one big caveat: no app transfer. But apps graduating from a "hobby" into a "small business" would definitely involve transferring ownership. Read how to transfer apps without engaging in the app transfer process and losing out on the program's benefits.
END_OF_DOCUMENT_TOKEN_TO_BE_REPLACED

Compiled code can conclude the instruction set through conditional compilation. But what about processor-independent scripts? Finding out the current native processor architecture and emulation status thereof would be very useful in build systems that doesn't support cross-compilations. Find out how a shell script can find out whether it is running under Apple's processor, Intel, or emulated.
END_OF_DOCUMENT_TOKEN_TO_BE_REPLACED

Being in the "bleeding edge" has its drawbacks in addition to benefits. Blazing a fresh trail means it's more rough and plenty of unknowns. Similarly in open source software, support for the ARM architecture is slim and even slimmer on the Mac. But there is a way to run "legacy" Intel-only command line apps on the Mac.
END_OF_DOCUMENT_TOKEN_TO_BE_REPLACED

Distributing macOS apps as ZIP archives has been quaint since Sierra. Today’s macOS packaging requirements mandates notarization, otherwise it would say that your app is suspicious. This often means distributing apps within disk images since this container format can be signed, notarized, and stapled.
END_OF_DOCUMENT_TOKEN_TO_BE_REPLACED

Publishing similar apps is considered spamming. Yet there are valid reasons to develop multiple apps from the same code base. Here is what you need to know to avoid being labeled as spammer by app reviewers.
END_OF_DOCUMENT_TOKEN_TO_BE_REPLACED

Some developers' app updates were rejected from the App Store because their apps look similar. Worse, some others were marked as spammer due to publishing apps that looks like another developer's app. How can you avoid this?
END_OF_DOCUMENT_TOKEN_TO_BE_REPLACED